The former Labour leader appeared at a protest in central London this afternoon, in support of the people of Palestine amid the ongoing conflict with Israel. Mr Corbyn stood up to address the crowd, having been introduced as “the real leader of the opposition”. Crowds chanted “oh, Jeremy Corbyn” as he took to the stage, with several supporters throwing roses at his feet.

The former Labour leader, who stepped down after his failed 2019 election bid, told the crowds that international action provides “succour, comfort and support” to those suffering in the conflict.

He said: “Think what it’s like being a mother or father and seeing a building bombed in front of you, knowing your family is in there, and you can do nothing.

“It’s our global voices that will give succour, comfort and support in those settlements alongside Gaza and all over the West Bank, East Jerusalem who are suffering at this time.

“End the occupation now. End all the settlements now and withdraw then. End the siege of Gaza now.” 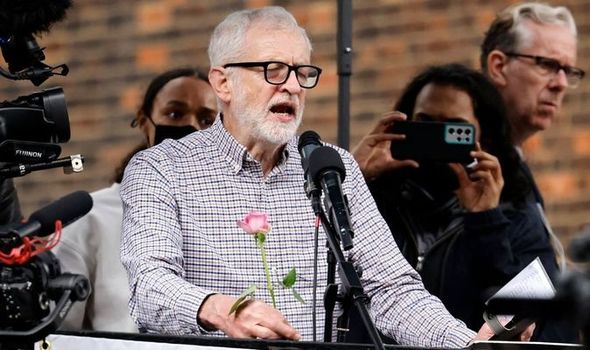 Mr Corbyn was heaped with praise for speaking at the Solidarity with Palestine march, with many questioning why current Labour leader Sir Keir did not attend.

One person wrote on Twitter: ‘The Real Leader of the Opposition’ Jeremy Corbyn. On the right side of history, again.

“Starmer, and his Labour, have lost it all today, I feel. People power is where we’re at now.”

Another person said: “He was introduced as “the real opposition leader”, @jeremycorbyn is speaking to the crowd.

“@Keir_Starmer was criticised for not joining the protest.”

A third wrote: “Eat your heart out @Keir_Starmer. THIS is a leader, THIS is who we need and want.”

Another person said: “Starmer can move the deckchairs around as much as he likes but Jeremy Corbyn will always be the real leader of the opposition.”

Former shadow home secretary Diane Abbott also spoke about the rally and told those in attendance: “We must remember we are part of an international movement. This is a worldwide movement for justice.

“Palestinian people are having their land seized… and they are now being killed in their homes.

“All of this is illegal.”

Priti Patel: Why didn’t the UK shut its borders back in March?