Home » Politics » Conor Lamb, House Moderate, on Biden’s Win, ‘the Squad’ and the Future of the Democratic Party

The carefully calibrated unity of the Democratic Party lasted about six months. After a summer when moderates and progressives joined together to elect Joseph R. Biden Jr. president, his victory has now given permission for the party to expend time and energy on the difficult task of sorting out its ideological core.

House Democrats, reeling from unexpected losses in competitive races, wasted no time. Moderates have blamed progressives for pushing policies such as “Medicare for all” and defunding the police, which are unpopular in swing districts.

But progressives, rallying to influence Mr. Biden on cabinet appointments and initial policy, have pushed back. Representative Alexandria Ocasio-Cortez of New York has pinned those House losses on poor digital campaigning, saying members made themselves “sitting ducks” for Republicans.

Conor Lamb, the 36-year-old Pennsylvania Democrat who beat back a Republican challenge in a district that President Trump won in 2016, is one of those moderates who believes the left is costing Democrats in key areas. In an interview with The New York Times, Mr. Lamb said he expected the incoming administration to govern as it had campaigned: with progressives at arm’s length.

This interview has been condensed and lightly edited for clarity.

Q. What’s your expectation of Joe Biden’s Democratic Party? How do you expect him to fall on the moderate vs. progressive divisions we see in the House?

A. I think that he means what he says when he says, “I ran a Democrat, but I’m going to serve as an American president.” And what that means, I believe, is that every single day, and on every issue, he’s going to be working to get as many people around the table and singing from the same sheet music as you can. And sometimes that will be everyone in the Democratic caucus. Sometimes it will be some people in the Democratic caucus and some Republicans. I think that’s going to change by the issue, but he’s a person that really believes our actual job in Washington, D.C., is to work with each other, compromise to get the best deal we can and then get the thing done. And I believe that too.

What went wrong for House Democrats when they were supposed to pick up seats?

I’m giving you an honest account of what I’m hearing from my own constituents, which is that they are extremely frustrated by the message of defunding the police and banning fracking. And I, as a Democrat, am just as frustrated. Because those things aren’t just unpopular, they’re completely unrealistic, and they aren’t going to happen. And they amount to false promises by the people that call for them.

If someone in your family makes their living in some way connected to natural gas, whether on the pipeline itself, or you know, even in a restaurant that serves natural gas workers, this isn’t something to joke around about or be casual about in your language.

That’s what we’re trying to say: that the rhetoric and the policies and all that stuff — it has gone way too far. It needs to be dialed back. It needs to be rooted in common sense, in reality, and yes, politics. Because we need districts like mine to stay in the majority and get something done for the people that we care about the most. 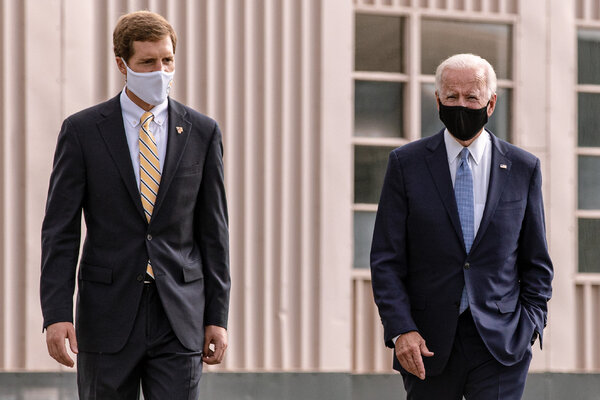 Let’s take that issue. Joe Biden did not support defunding the police. Almost all the members of the Democratic Congress, even folks like Senators Bernie Sanders and Elizabeth Warren, came out against it. What is the party supposed to do that it didn’t?

I think we can do it much more clearly and repetitively and show it with our actions. We need to have a unified Democratic message about good law enforcement and how to keep people safe, while addressing the systemic racism that I do believe exists and the racial inequities that absolutely do exist. And when we passed the George Floyd Justice and Policing Act, that’s exactly what we did.

But the people that I was on the phone with, when we were passing that at the time, were not the freshmen members who are criticizing us today. It was Karen Bass and Cedric Richmond and Colin Allred — and I was listening to them. And, you know, pretty much most of our moderate conservative Democrats all voted for that bill. We listened, we compromised and we got something done. And that’s what this job is really about.

Is it the view of moderate Democrats that the progressives or the so-called Squad has taken up too much space in the national conversation?

I wouldn’t put it that way. Because that really focuses on them as individuals and their personalities. And that is not what we’re trying to do. We’re trying to have a discussion about policy, not personality. And I want to be really clear on that, because I respect every one of those members and how hard they worked to get elected and how hard they have worked to stay elected and represent their constituencies. But the fact is that they and others are advocating policies that are unworkable and extremely unpopular.

So I would just say that our view is more that we want to have a clearer, sharper, more unified message on policy itself, regardless of who gets the credit or who is in the limelight for that.

In the Democratic primary, even as progressive candidates lost, polling showed that their issues remained popular among Democrats. Even things like single-payer health insurance or things like the Green New Deal. What’s your response to that?

At the end of the day, it’s individual candidates that have to win races, and then work with their fellow officeholders to pass bills into law and change people’s lives. So you can tell me all the polling you want, but you have to win elections.

And I’ve now been through three very difficult elections in a Republican-leaning district, with the president personally campaigning against me. And I can tell you that people are not clamoring for the two policies that you just asked about. So, that’s just what probably separates a winner from a loser in a district like mine.

On Saturday, I interviewed Congresswoman Ocasio-Cortez and she mentioned you and how some House moderates ran their campaigns. I wanted to get a fact check quickly: Did you all spend just $2,000 on Facebook the week before the election?

She doesn’t have any idea how we ran our campaign, or what we spent, to be honest with you. So yeah, her statement was wrong. But there’s a deeper truth there, which is this — that our districts and our campaigns are extremely different. You know, I just leave it at that.

She said the way moderates ran their campaigns left them as “sitting ducks.” What was your reaction?

I have to be honest and say that I was surprised about the whole interview on the day when Vice President and now President-Elect Biden was having the election called for him. I just don’t think it was a day for people to be sniping at other members, especially in districts that are so different from their own.

I respect her and how hard she works. And what she did in an extremely low-turnout Democratic primary. But the fact is that in general elections in these districts — particularly in the ones where President Trump himself campaigns over and over and over again, and attacks members within their own Republican-leaning districts, like me and Representative Slotkin and Representative Spanberger — it’s the message that matters. It’s not a question of door knocking, or Facebook. It matters what policies you stand for, and which ones you don’t. And that is all that we are trying to say.

The American people just showed us in massive numbers, generally, which side of these issues that they are on. They sent us a Republican Senate and a Democratic president; we’re going have to do things that we can compromise over.

You mentioned sniping. Are progressives leading that or are moderates also doing so? I’m thinking of all the anonymous quotes attacking members of the left, something that she mentioned.

That’s just honestly a hard question to answer, because I don’t know who the anonymous people are. I believe we should put your name behind those types of comments and that’s generally what I do.

But I got to say, as you’ve talked a lot about Representative Ocasio-Cortez, she can put her name behind stuff and that’s I guess courageous, but when it’s a damaging idea or bad policy, like her tweeting out that fracking is bad in the middle of a presidential debate when we’re trying to win western Pennsylvania — that’s not being anything like a team player. And it’s honestly giving a false and ineffective promise to people that makes it very difficult to win the areas where President Trump is most popular in campaigns.

You and Congresswoman Ocasio-Cortez are on different sides of the ideological spectrum, but the same side of a generational divide among Democrats. House party leadership has said they plan to run again. Does there need to be more youth among Democratic leadership?

The most important thing is that the leadership we have has to listen to the newer, younger members and actually give us some input and help us get accomplishments at the policy level.

But what seems to happen sometimes is when push comes to shove, the younger members who have come from these really tough districts and tough races don’t always feel that the leadership takes our input as seriously as we would like. And I think that’s something they need to improve, and I would bet that Representative Ocasio-Cortez would feel similarly — even if it was on different issues.