Justice Ruth Bader Ginsburg made a final trip to the Supreme Court on Wednesday. The justice, who died on Friday at 87, was honored with a private ceremony in the court’s Great Hall and was then brought outdoors to the top of the marble steps leading to the highest court, where she will lie in repose on Wednesday and Thursday.

People lined up outside the Supreme Court, past the Capitol and toward the Library of Congress, to pay respects to Justice Ginsburg, who became a liberal icon and champion for equal rights. 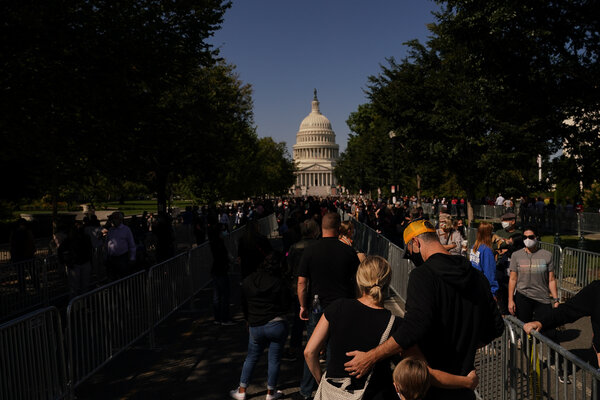 Family, friends and members of the court remembered Justice Ginsburg during an intimate ceremony inside the Great Hall.

“It has been said that Ruth wanted to be an opera virtuoso but became a rock star instead,” Chief Justice John G. Roberts Jr. said.

Journalists were the first to arrive before dawn, followed by a growing line of visitors. Every mourner had his or her own story for why he or she felt compelled to come in person and wait hours to say goodbye, in the middle of a pandemic.