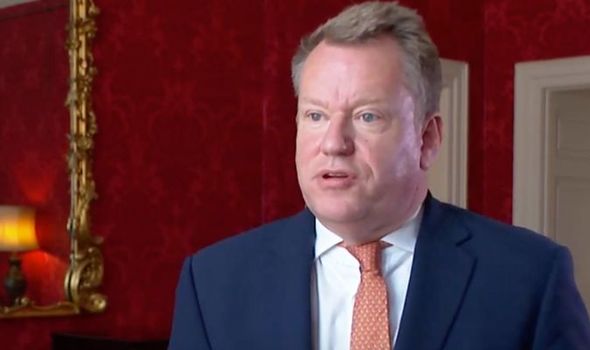 The Brexit minister met with his EU counterpart Maros Sefcovic this afternoon for face-to-face discussions on the Protocol.

Talks have already been extended beyond the initial timetable proposed by the UK as both sides frantically try to avoid the suspension of the Brexit treaty via the legal mechanism of Article 16.

While it is understood some progress was made in some areas today, talks once again ended without results.

With Lord Frost warning he will not let discussions become unnecessarily lengthy, each meeting without a breakthrough pushes Britain closer to deploying the nuclear option.

“We discussed the full range of issues causing difficulties in Northern Ireland.

“We would still like to find a negotiated solution.

“But the gap between our positions is still significant and we are ready to use Article 16 to protect the Belfast (Good Friday) Agreement if other solutions cannot be found.

“Technical discussions will continue next week and we will meet again next Friday.”

Express.co.uk understand progress was made on medicines in talks between officials earlier this week but an agreement is yet to be reached.

Under the current terms of the Protocol medicines approved for use in the UK cannot be used in Northern Ireland unless they comply with EU standards.

The Government is looking to change the implementation of the Protocol so that all medicines approved for use in Britain can be used in the province.

A solution on the matter must be found within “weeks” if there is to be a solution that does not require Article 16 according to officials.

While there is some hope a long term fix will be found on medicines, the UK mood is more downbeat on other areas.

Despite constructive discussions, no significant progress has been made on easing the flow of goods to Northern Ireland across the Irish Sea.

The protocol effectively places Northern Ireland in the EU’s single market for goods to help avoid a hard border with Ireland.

But this has led to checks on goods crossing from Great Britain to Northern Ireland, creating a barrier to trade within the UK.

Lord Frost wants Brussels to agree to scrap all checks on goods set to remain in Northern Ireland with little chance of leaking into the EU single market.