The prime minister has told EU leaders of his disappointment that more progress had not been made during Brexit talks.

The latest “state of play” in negotiations for the UK’s exit of the European Union was discussed. 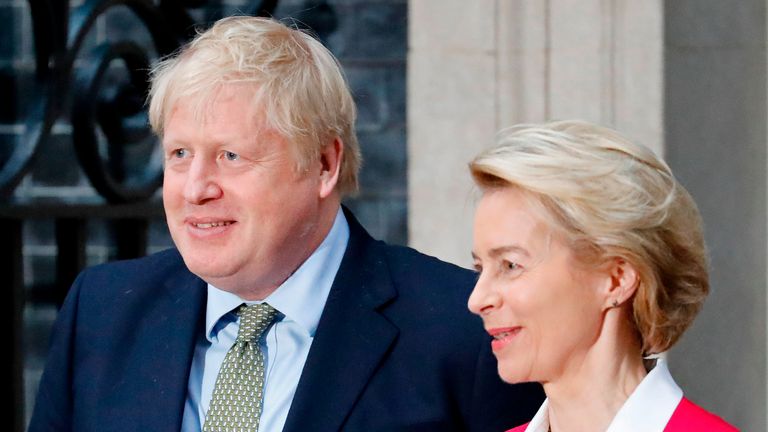 And in a statement afterwards, Downing Street spokesperson said: “The prime minister noted the desirability of a deal, but expressed his disappointment that more progress had not been made over the past two weeks.”

They added that the prime minister “would reflect before setting out the UK’s next steps”.

Mr Johnson had given 15 October as the deadline for the talks, but this has been pushed back a few days to make room for the European Council’s summit.

The leaders told Mr Johnson that the bloc is ready to continue the trade talks but insisted the UK must budge on unresolved issues.

“We pressed again for progress to be made at the negotiation table,” Mr Michel said.

In a Tweet, Mrs von der Leyen said they were continuing to work on a deal, but that the “conditions must be right” if there was to be an agreement.

Earlier this month, Mr Johnson and Mrs von der Leyen agreed to “intensify” negotiations in a final push for a wide-ranging agreement covering Britain’s relationship with the EU when the current Brexit transition period ends at the end of the year.

However, the EU side has been resisting efforts by the British side to impose a tight deadline in an attempt to force through an agreement.

The UK’s chief negotiator Lord Frost is expected to brief the prime minister on the negotiations with his EU counterpart Michel Barnier – which have been continuing this week – before a final decision on whether it is worth continuing.

In this case, just 24 hours more as it confirms that the prime minister will make his decision whether to continue talking next week on Friday, rather than the previous deadline of Friday.

This is so that Boris Johnson can ruminate on what is decided at a meeting of the 27 EU leaders in Brussels tomorrow.

Although the statement says there is the “desirability of a deal”, the prime minister declared “disappointment that more progress had been made over the past two weeks”.

Not too much can be read into this. Several cabinet ministers think there will be a deal, as do many in parliament.

The conventional wisdom in Westminster is that one big fight probably over fishing is likely before all sides come together.

Those closer to the discussions, however, are more cautious, warning that Number 10 and the EU both need to make more painful concessions to get there.

Mr Johnson will have to weigh up which is worse – cries of betrayal on the one issue he presents himself as a purist, or the uncertainty and pain of no deal, at a time when most are focused on the coronavirus second spike and the latest poll puts Scottish independence closer than ever.

Neither course will be pain free.