The EU’s chief negotiator will meet his British counterpart David Frost with the aim of reaching an agreement by the middle of November. Both the UK and EU said they were willing to discuss outstanding issues including fishing arrangements and state aid. They will also set up a “small joint secretariat” to help make a draft of their agreement.

Mr Frost tweeted: “We have agreed that a basis for negotiations with the EU & @michelbarnier has been re-established.

“Intensive talks will happen every day and begin tomorrow afternoon, 22 October, in London.”

Downing Street also said in a statement: “On the basis of that conversation we are ready to welcome the EU team to London.

“It is clear that significant gaps remain between our positions in the most difficult areas, but we are ready, with the EU, to see if it is possible to bridge them in intensive talks.” 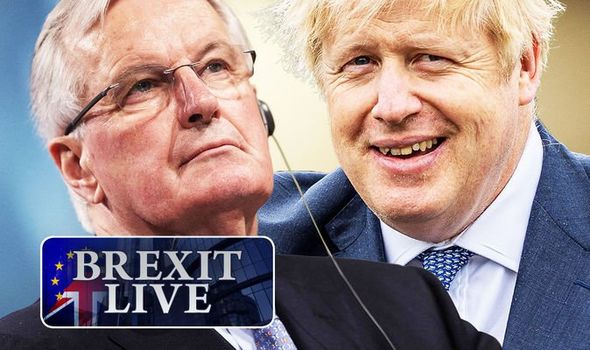 She tweeted: “Hard work needed. No time to lose.”

Tory MP Kit Malthouse insisted the Government has supercharged their preparation for a no deal Brexit.

While speaking to Kay Burley on Sky News, he insisted businesses should continue to prepare for a no deal scenario at the end of the year.

Ms Burley accused the Government of Brexit confusion and lacklustre ability in the talks with the EU.

She said: “What on Earth is going on with Brexit talks?

“We were told that we needed to get ready for a no deal Brexit now it looks as if talks are happening again.

“How are businesses supposed to prepare for something that is going to happen in a few weeks time if they don’t know whether there is going to be a deal or now?”

Mr Malthouse defended the Government and insisted they had been preparing for all eventualities in the Brexit trade talks.

He said: “I have been in businesses for 20 odd years now and you prepare for the worst and hope for the best.

“It does look like we have had a bit of movement from our partners in the EU, negotiations are starting again, that is a cause for hope but at the same time we are getting quite close to the deadline.

“The Government has said to businesses privately and publicly they need to prepare for the possibility that we might go out on WTO terms.”