The crew of the Irish trawler caught the incident on camera.

During the course of the confrontation, the Irish skipper can be heard on VHF radio warning the Spanish ship to keep away, according to Afloat.ie.

Chief Executive of the Irish South and West Fish Producers’ Organisation, Patrick Murphy, said: “This was an attempt to force Irish boats off our own fishing grounds. It is intimidation.

“Our authorities must take action against this vessel acting extremely dangerously at sea and endangering life.

“It is appalling. This was a threat to life at sea, so action must be taken against the vessel which tried to do the ramming.

JUST IN: Britain told to team up with Swiss to halt ‘petty’ Brussels bullies 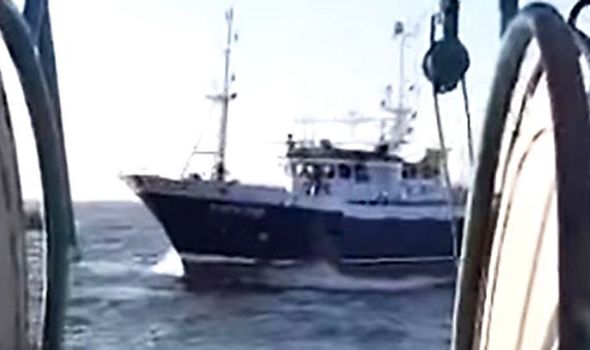 “The Spanish boat should be arrested and stopped from fishing in Irish waters.”

“The situation continues to be closely monitored by the National Fisheries Monitoring Centre at the Naval Base, Haulbowline.”

The flare-up occurred on Friday, two days after Cork fishermen staged a demonstration against what they regard as their punitively small share of EU fishing quotas.

[THIS IS A LIVE BLOG – SCROLL DOWN FOR REGULAR UPDATES]

Boris Johnson has unveiled ambitious plans for a new, £200million national ‘Brexit’ flagship to succeed the Royal Yacht Britannia with the aim of promoting the UK brand across the world, in line with the Prime Minister’s Global Britain vision.

The vessel will be used to host trade fairs, ministerial summits and diplomatic talks as the UK seeks to build links and boost exports following Brexit.

It will be the first national flagship since Britannia, which was decommissioned in 1997.

However, the new vessel will be a ship rather than a luxury yacht.