The study of 222 firms, undertaken by consultancy firm EY, singled out the Irish capital as the most popular destination, followed by Luxembourg (29), Frankfurt (23) and Paris (22). EY Ireland chief economist Neil Gibson celebrated the news, saying: “Our data shows that even in the grip of a pandemic, firms are still making decisions to move people and assets to respond to the reshaped geo-political landscape.

(This is a liveblog. Scroll down for regular updates.)

“Sitting atop European charts has become an encouragingly welcome trait for Ireland, with economic growth and tax-receipt data likely to mimic its performance in the tracker.

“Rising costs remain the one potential brake on the positive momentum, and this is certainly an angle competitor cities are using to try to compete with Dublin for post-Brexit relocations.”

EY partner Omar Ali added: “The push and pull of markets across Europe for business historically led from the U.K. continues. 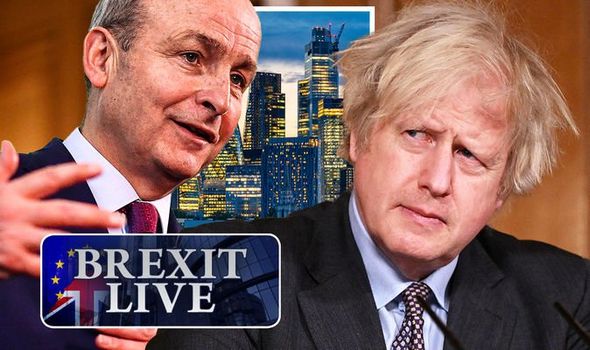 “Such ongoing uncertainty poses the risk of fragmented markets, which is inefficient and costly for all financial services users and potentially damaging to the global competitiveness of both the UK and EU.”

Finance services companies have already announced firms roughly 7,600 jobs will move from the UK to the EU – up 100 on EY’s last survey in October.

In total, something in the region of £1.3 trillion in assets has also moved, an increase of £100 billion.

In 2018, think tank Bruegel warned the City could lose 10,000 banking jobs and 20,000 roles in the financial services industry.

British fishermen feel they are being bled dry by skinflint Europeans who are exploiting Brexit red tape to pay them a pittance for their catches.

Despite landing record hauls, many are struggling to survive because the price of fish has plummeted by a third.

They say that firms in France, Spain and Italy are refusing to pay top whack because Brexit red tape means the fish aren’t as fresh.

This has caused one fisherman to reveal that the value of their catch tumbled from an expected £26,000 to just £16,000 last week.

Coronavirus: Starmer attacks Sunak – and says chancellor is to blame for delaying lockdown