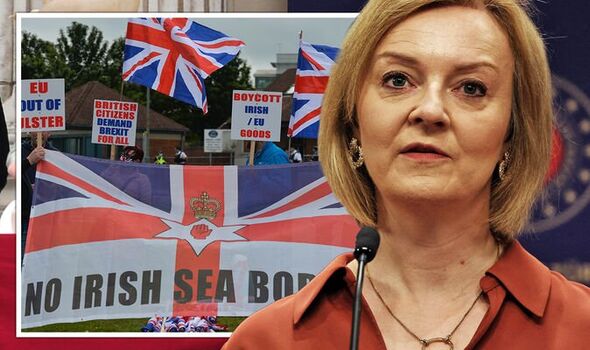 The German Chancellor is seen to be taking a more robust stance with the UK over the Brexit deal than his predecessor Angela Merkel. His administration has repeatedly delivered clear, public rebukes to London over its Brexit maneuvering, particularly over the Northern Ireland Protocol, which Mr Johnson is attempting to alter unilaterally after a series of failed negotiations. Commenting on the move, Mr Scholz said: “It is a very regrettable decision that the British government has taken. It is a departure from all the agreements we have made.” His Foreign Minister, Annalena Baerbock, added: “London is unilaterally breaking agreements and it is doing so for predictable motives of its own. We in the EU cannot accept that.” Mr Johnson will come face to face with Mr Scholz on Monday for the G7 Summit which is being held in the German alps.

Boris Johnson has sent a defiant Brexit message by insisting the UK would not have been able to be at the forefront of providing support for Ukraine if it was still in the European Union.

When asked at the G7 summit if Britain is better off than it was six years ago when it was still part of the bloc, he told CNN: “It is (better off). Let me give you an example.

“Thanks to the position that we took, we had an independent medical agency that was able to make sure that the first Covid vaccine in anybody’s arms in the world was in the UK.”

He added: “Secondly, we have been able to do a lot of free trade deals around the world. And we are able to change some of our regulations to take back control of our borders.

“We are no longer spending shedloads of money on projects that we couldn’t control. And that was a good decision.”

Liberal Democrats Leader Ed Davey fumbled to explain his party’s approach to economic policy as he refused to outline if he would support a return to the EU single market.

Host of the BBC’s Sunday Morning, Sophie Raworth asked: “Do you think the people of Tiverton and Honiton, who overwhelmingly voted leave in the EU referendum, do you think that they realise that your party wants to take the UK back into the EU single market?”

Mr Davey replied: “Well, we’re actually focusing on the trade deal and the trade deal is really bad for people in Tiverton and Honiton – the farmers were telling us that they feel betrayed by the Government policy.

Ms Raworth persisted as she asked: “And you want to take the UK back into the EU single market?”

Mr Davey said: “At the moment, we want to focus on the issues that are affecting people and the cost of living crisis is partly caused because of the very bad trade deal.”

Good morning from London. I’m Tara Fair, I’ll be bringing you all the latest developments on Brexit. Please feel free to get in touch with me as I work if you have a story or tips to share! Your thoughts are always welcome.