WASHINGTON — President Biden has said repeatedly that he wants to create a path to citizenship for all of the 11 million undocumented immigrants in the United States.

But even as he prepares to push hard for the broadest possible overhaul of the nation’s immigration laws, he and his aides have started to signal openness to more targeted approaches that could win citizenship for smaller, discrete groups of undocumented immigrants. At a CNN town hall on Tuesday, he said such efforts would be acceptable “in the meantime.”

In a private telephone call with activists on Wednesday, top immigration aides to Mr. Biden said they supported what they called a “multiple trains” strategy, which could target citizenship for “Dreamers,” the young immigrants brought into the country illegally as children; farm workers who have toiled for years in American fields; and others.

Smaller bills could move forward as the president tries to build support for the broader legislation, which is scheduled to be introduced on Thursday, according to two people who were on the call.

If he chooses to move step by step, Mr. Biden appears unlikely to anger the most powerful pro-immigration groups, which are embracing a more pragmatic strategy after spectacular defeats under Presidents George W. Bush and Barack Obama.

For more than two decades, activists have tried and failed to secure passage of a broad overhaul of the nation’s immigration laws that would create a path to citizenship for most undocumented immigrants, a faster path for Dreamers, expanded visa access for highly skilled workers and a new program for seasonal agricultural laborers.

They are betting that Mr. Biden will struggle even more than his predecessors did to win support from a Republican Party that became more anti-immigrant during the Trump administration.

While the activists are willing to let Mr. Biden try for a bipartisan deal this year, they have warned that they will not wait forever.

“We want 11 million people legalized. That is our North Star,” said Frank Sharry, the executive director of America’s Voice and a veteran of immigration wars in the nation’s capital for more than 30 years. “But we can’t come home empty-handed. We’re not going to adopt an all or nothing approach. We have to achieve a breakthrough.”

For activists like Mr. Sharry, that is a major shift, and it could herald fierce debates over whether Democrats should use parliamentary tactics in the Senate to ram through individual immigration measures without any Republican support.

The advocates are mobilizing on behalf of separate bills that would legalize Dreamers; farm workers; immigrants granted temporary status after fleeing war and natural disasters; and undocumented “essential workers” who have fought on the front lines of the coronavirus pandemic. 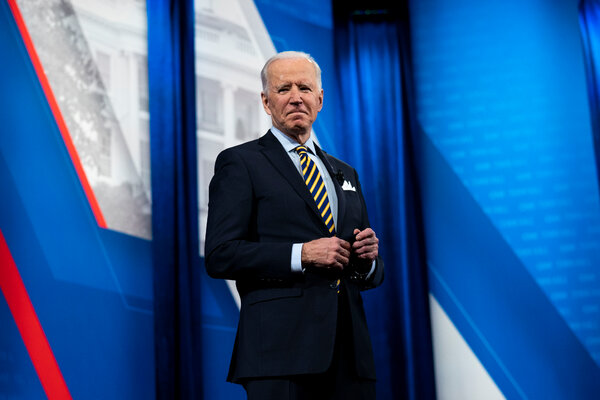 Publicly, the White House is insisting that Congress should pass the president’s broad immigration overhaul. Jen Psaki, the White House press secretary, said this week that Mr. Biden was pushing for comprehensive changes because “they all need to be addressed — that’s why he proposed them together.”

And the chief backers of Mr. Biden’s legislation in Congress — Senator Bob Menendez of New Jersey and Representative Linda T. Sanchez of California — say abandoning the broader effort before it has even begun would be a mistake. Mr. Menendez and Ms. Sanchez are expected to reveal details about the president’s legislation on Thursday morning after it is introduced in the House.

One Democratic aide familiar with the legislation said if immigration activists ask for only “half a loaf,” they should not be surprised when they end up going home with just a single slice of bread.

“We have an economic and moral imperative to pass big, bold and inclusive immigration reform — reform that leaves no one behind,” Mr. Menendez said Wednesday evening. He criticized advocates for not being willing to fight for legislation that would eventually legalize all of the country’s undocumented population.

“We must not start with concessions out of the gate. We are not going to start with two million undocumented people instead of 11 million,” he said. “We will never win an argument that we don’t have the courage to make. We must make our case for bold, inclusive and lasting immigration reform.”

How to successfully revamp the nation’s immigration system has for decades eluded policymakers in Washington. The last time a major immigration bill was signed into law was in 1990, when President George Bush expanded legal immigration into the United States, ahead of an explosion of illegal crossings at the southwestern border in the following 20 years.

The surge in illegal border crossings prompted demands for increased enforcement from conservatives even as backlogs in legal immigration created a growing crisis for businesses looking for workers and for families seeking refuge in the United States from violence and disasters at home.

For nearly three decades, those in favor of immigration have argued for a single, comprehensive bill with elements that could unite Democrats and Republicans, labor unions and big businesses, security-minded conservatives and liberal immigration supporters.

Such bills — which were introduced in 2001, 2006, 2007 and 2013 — centered around a trade-off: amped up border security and immigration law enforcement in exchange for a path to citizenship for undocumented people. They also included increases in the number of temporary workers allowed into the United States; more resources for processing asylum applications; new opportunities for high-skilled workers from other countries; some limits on immigration based on family ties; and protections for undocumented immigrants brought to the United States as children.

But none of those efforts succeeded. Despite support from President George W. Bush, the Senate and House failed to reach a compromise in 2006, and legislation in 2007 was defeated in the Senate. In 2013, Mr. Obama secured bipartisan Senate passage of an immigration overhaul, 68 to 32, only to see it ignored by the Republican-controlled House. Over the past four years, some of the conservative side of the equation — border security — was secured by Donald J. Trump in the form of tough restrictions on asylum seekers and partial construction of Mr. Trump’s border wall.

Mr. Biden won the presidency in part by pledging that he would bring back bipartisanship and saying that his longstanding relationships in the Senate would help him bridge the partisan divides that have grown deeper in recent years. Ms. Psaki said the president has outlined “the tenets of what we think the proposal should look like” in the hopes of addressing the root causes of immigration problems.

But immigration advocates say the history of failure is driving a change in strategy this year.

“You’re talking about a fight that we’ve had for over three decades at this point,” said Lorella Praeli, the president of Community Change Action. “I’m not interested in a dance. I’m committed to seeing this through and delivering on concrete changes.”

Ms. Praeli and other proponents praised Mr. Biden, Mr. Menendez and Ms. Sanchez for their broader bill. But they also called on the president to promise that he will also use a budgetary tool known as reconciliation to enact smaller components of the legislation even as he pushes ahead with the larger effort.

Under Senate rules, legislation that significantly affects the nation’s budget can be passed with only a majority vote, avoiding filibuster rules that require the support of 60 senators. With the current 50-50 Senate, that would give Democrats the ability to pass reconciliation bills without Republican support and with Vice President Kamala Harris casting the tiebreaking vote — if they can stay united.

Immigration proponents say some more targeted efforts to legalize some undocumented immigrants would pass muster under the sometimes baffling rules of reconciliation, which are supposed to bar pure policy measures from bills that are supposed to deal with government taxation and spending. Because newly legalized residents would affect tax revenue and government benefits, the groups say immigration legislation could be tailored as budget measures.

Reconciliation is already being used to muscle through Mr. Biden’s $1.9 trillion pandemic relief package, but another budget measure is expected to address infrastructure funding and climate change.

“We should be included in that package,” said Mr. Sharry of America’s Voice.

Many Republican senators who had been supporters of immigration — including John McCain and Jeff Flake of Arizona; Lamar Alexander and Bob Corker of Tennessee; Orrin Hatch of Utah; Dean Heller of Nevada; and others — have left the Senate. Others, like Marco Rubio of Florida and Lindsey Graham of South Carolina, who helped negotiate previous immigration packages, shifted right in the Trump years.

Kerri Talbot, the deputy director of The Immigration Hub, said that it was clear to many of the groups that Republicans cannot be counted on to support a broad overhaul of immigration without the kind of extreme measures that Mr. Trump insisted upon during his presidency. She said that pursuing smaller, popular measures like providing legalization for Dreamers would put Republicans on the spot.

“We’re always open to having a broader discussion, but absent that, we want to move forward with pieces that can pass,” she said. “We would love to have bipartisanship. I’d love to have that conversation again. But it’s really up to Republicans.”

Ms. Praeli said she and others who have fought over immigration for years believed it was time to “put the ‘W’s’ on the board” by granting a path to citizenship to as many people as they can.

“We’re in a different moment,” said Ms. Praeli, who became a citizen in 2015 after being undocumented for years following her arrival in the United States as a small child. “We can see that Trump is no longer here, but Trumpism did not go away.”

Sturgeon plot: SNP considers reaching out to EU behind Boris’ back as Brexit deal on brink