The administration is stepping up the pace of vaccinations and expanding access to shots, but it remains in a race against a virus on the upswing. 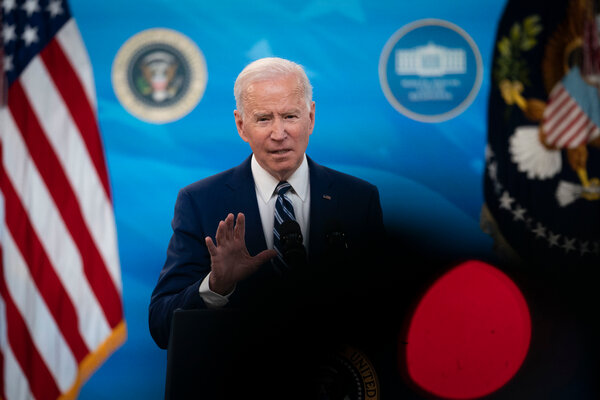 WASHINGTON — President Biden, facing a rise in coronavirus cases around the country, called on Monday for governors and mayors to reinstate mask mandates as the director of the Centers for Disease Control and Prevention warned of “impending doom” from a potential fourth surge of the pandemic.

The president’s comments came only hours after the C.D.C. director, Dr. Rochelle Walensky, appeared to fight back tears as she pleaded with Americans to “hold on a little while longer” and continue following public health advice, like wearing masks and social distancing, to curb the virus’ spread.

The back-to-back appeals reflected a growing sense of urgency among top White House officials and government scientists that the chance to conquer the pandemic, now in its second year, may slip through its grasp. Coronavirus infections and hospitalizations are on the upswing, including a troubling rise in the Northeast, even as the pace of vaccinations is accelerating.

“Please, this is not politics — reinstate the mandate,” Mr. Biden said, adding, “The failure to take this virus seriously is precisely what got us into this mess in the first place.”

According to a New York Times database, the seven-day average of new virus cases as of Sunday was about 63,000, a level comparable with late October’s average. That was up from 54,000 a day two weeks earlier, an increase of more than 16 percent. Similar upticks in Europe have led to major surges in the spread of Covid-19, Dr. Walensky said.

Public health experts say that the nation is in a race between the vaccination campaign and new, worrisome coronavirus variants. Although more than one in three American adults have received at least one shot and nearly one-fifth are fully vaccinated, the nation is a long way away from reaching so-called herd immunity — the tipping point that comes when spread of a virus begins to slow because so many people, estimated at 70 to 90 percent of the population, are immune to it.

But states are rapidly expanding access to more plentiful quantities of the vaccine. On Monday, at least six — Texas, Kansas, Louisiana, North Dakota, Ohio and Oklahoma — made all adults eligible for vaccination. New York said that all adults would be eligible starting April 6.