The airstrikes the president ordered on Iranian-backed militias show how he has to navigate between using force and pursuing diplomacy to revive the nuclear deal. 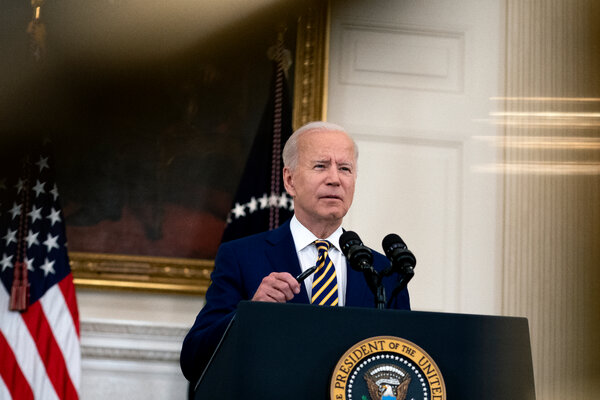 WASHINGTON — President Biden’s decision to strike Iranian-backed militias in Iraq and Syria early on Monday illustrated the delicate balancing act of his approach to Tehran: He must demonstrate that he is willing to use force to defend American interests, while keeping open a fragile diplomatic line of communication as the two countries try to resuscitate the 2015 deal limiting Iran’s nuclear program.

In public, administration officials insisted that the two issues are separate.

Mr. Biden, they said on Monday, acted under his constitutional authority to defend American troops by carrying out airstrikes on sites used to launch drone attacks on American forces in Iraq. They said that should not interfere with the final push to bring both countries back into compliance with the nuclear accord.

In fact, the issues are deeply intertwined.

To the Iranians, the march toward the capacity to build a nuclear weapon has been in part an effort to demonstrate that Tehran is a force to be reckoned with in the Middle East and beyond. Now, the country’s power has been augmented by a new arsenal of highly accurate drones, longer-range missiles and increasingly sophisticated cyberweapons, some of which involve technologies that seemed beyond Tehran’s skills when the nuclear deal was negotiated in 2015.

Part of Mr. Biden’s goal in trying to revive the nuclear deal is to use it as a first step toward pressing Iran into addressing other issues, including its support for terrorist groups in the region and its expanded arsenal. On that front, the strikes ordered Sunday and carried out early Monday by U.S. Air Force fighter-bombers are not expected to be any more than a temporary setback to Iran.

There is also the danger of escalation. Later on Monday, Iranian-backed militias were suspected of firing rockets at American forces in Syria, according to a U.S. military spokesman, Col. Wayne Marotto. Kurdish-Syrian news media said the targets were U.S. troops near an oil field.

Even if the administration succeeds in putting the nuclear deal back together, Mr. Biden will still face the challenge of finding a way to further rein in the Iranians — a step the country’s new president-elect, Ebrahim Raisi, said the day after his election that he would never agree to.

In that sense, the airstrikes only underscored how many conflicting currents Mr. Biden faces as he attempts to fashion a coherent Iran policy. He faces pressures in various directions from Congress, Israel and Arab allies, never mind Tehran’s incoming, hard-line government, led by Mr. Raisi, who was placed under sanctions in 2019 by the Treasury Department, which concluded that he “participated in a so-called ‘death commission’ that ordered the extrajudicial executions of thousands of political prisoners” more than 30 years ago.

Coronavirus: ‘We have the power to proceed’ with Manchester Tier 3 lockdown if talks fail, Raab says

Brexit: Sausage war between UK and EU not even handbags at dawn, MPs told