The Brussels diplomat was told he must release copies of the legal text for the future EU-UK relationship immediately amid growing anger that it will be bundled past MEPs. The powerful Conference of Presidents – made of political group leaders – met with the bloc’s Brexit chief earlier this morning to discuss the ongoing wrangling over the future UK-EU trade agreement. The senior MEPs will publish a statement issuing a warning to EU Brexit chief Michel Barnier, according to a source familiar with the plan.

After the meeting, Mr Barnier said: “In the final stretch of talks, transparency and unity are important as ever. Debriefed the EU Parliament’s Conference of Presidents this morning on EU-UK negotiations.

“Good progress, but last stumbling blocks remain. We will only sign a deal protecting EU interests and principles.”

Sources close to the talks have described both sides as still “far apart” on the main sticking points – future fishing quotas and common standards. 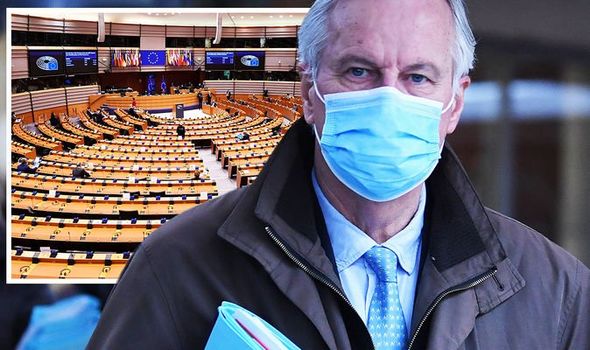