Home » Politics » As Their D.C. Days Dwindle, Ivanka and Jared Look for a New Beginning

WASHINGTON — Town officials in Bedminster, N.J., have the plans for a possible Trump family future, or at least the blueprints: a major addition to Ivanka Trump and Jared Kushner’s “cottage” on the grounds of the Trump National Golf Club, four new pickleball courts, a relocated heliport, and a spa and yoga complex.

As Manhattan awaits word of the Trump family’s return, the first daughter and her husband appear to be making preparations elsewhere: a Garden State refuge behind guarded gates, perhaps, or Florida, where President Trump is renovating his Mar-a-Lago estate.

But New York now seems inhospitable and nowhere in their plans.

“In an odd way, they will even have a harder time than Trump himself” in New York, said Donny Deutsch, a brand management mogul in Manhattan and no-holds-barred critic of Mr. Trump on cable TV. “He’s despicable but larger than life.”

“Those two are the hapless minions who went along.”

Sam Nunberg, a short-lived Trump campaign adviser, said he would never presume to offer the couple advice, but “I’m moving to Florida next year for taxes and lifestyle.”

Wherever they alight, Ms. Trump and Mr. Kushner seem poised for a quick departure from Washington, where they always struggled to fit in. The couple had already expanded their “cottage” in New Jersey by 2,500 square feet in 2016, adding a basement and a fireplace sitting room, all documented by Ms. Trump on Instagram. The new plans before the Bedminster Township call for an expanded master bedroom, bath and dressing room, two new bedrooms, a study and a ground floor veranda, making it more comparable to the $5 million house they rent for $15,000 a month in the gilded Washington enclave of Kalorama.

Plans also call for adding five more “cottages” of 5,000 square feet each to the property, and a recreation complex with spa treatments and a “general store.” A friend of the family said Tuesday that the renovations have been going on for awhile, but Trump representatives are set to present the plans to the township on Dec. 3. 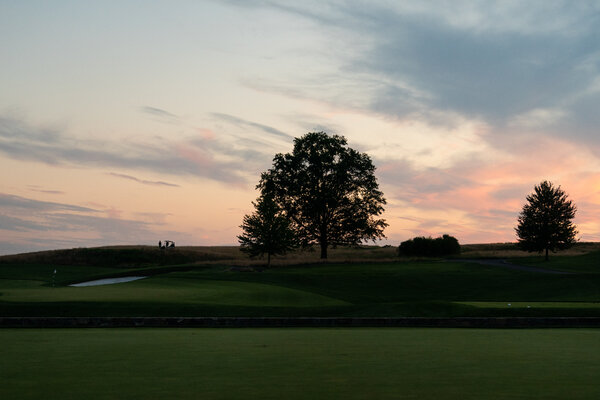 When Ms. Trump and Mr. Kushner moved to the nation’s capital, they had convinced many observers that they would be a moderating voice in the West Wing.

It has been a turbulent social ride since then, captured best by their experience with the Milton Gottesman Jewish Day School of the Nation’s Capital. In 2017, the couple enrolled their elder two children in the private elementary school.

The small student body leans heavily toward the progeny of public servants and diplomats derided by Mr. Trump as the “Deep State,” and the Kushners’ enrollment created the kind of heated divide that has trailed the Trumps over the past four years. Some parents lobbied to refuse them admission; others urged tolerance for children not guilty for what they saw as the sins of their grandfather.

Once in, Ms. Trump and Mr. Kushner tended to violate the unspoken rule of the Washington private-school world, that parents with heavy security details keep disruption to a minimum, four parents said. At schoolwide events, the family and its entourage often occupied the front two rows, standing to greet administration well-wishers, said one irritated parent.

Three people, including two who were present, spoke about a birthday party Mr. Kushner decided to attend with his children. He then requested the hosts’ Wi-Fi password so he could work in the living room.

The tension came to a head this fall, after the White House event to announce Judge Amy Coney Barrett’s nomination to the Supreme Court, which featured few masks, no social distancing, a rash of coronavirus infections and the president’s subsequent hospitalization with Covid-19. With parents up in arms, school administrators approached the family about the potential exposure of students, the youngest of whom had been attending in-person classes. According to a person familiar with the discussions, talks faltered on the couple’s reluctance to answer basic questions, including when their children were last exposed to Mr. Trump.

The family withdrew from the school on Oct. 19 and enrolled in another Jewish elementary school in the Washington suburb of Rockville, Md.

Carolina Hurley, a White House spokeswoman, has issued the same blanket response since early this month when the Jewish Telegraphic Agency reported the children’s withdrawal: “Unnamed sources attacking a family’s decision about what is best for their kids in the middle of a pandemic is shameful. As is true for all families, schooling choices and education are deeply personal decisions and they owe no one, especially idle gossips seeking press attention, an explanation.”

The school has stuck to its official statement as well: “Our school community has made extraordinary efforts to provide a safe and supportive learning environment during these challenging times. As is our longstanding policy, we do not discuss individual students and families.”

So it has gone in Washington for the family, whose neighbors include the Obamas and Jeff Bezos. The Daily Mail, a gossipy tabloid, installed a lone paparazzo, Matthew D’Agostino, on the street outside the family’s house. Liberal neighbors or their guests passed the photographer’s car trading news tips, murmuring that taxpayers were footing the bill for the Secret Service to stay in a nearby apartment, dishing on which Middle Eastern diplomats were visiting the Jordanian ambassador’s house across the street.

Mr. D’Agostino passed word to editors more interested in “full-length shots; they want the dress, the shoes, the bag,” or a photo of the cheap bottle of wine that Treasury Secretary Steven Mnuchin, a multimillionaire, brought to dinner.

The family’s home had once been occupied by Shirley Temple Black, the movie star turned diplomat, her presence noted on a bronze plaque. “What plaque is going to be here when they’re gone?” Mr. D’Agostino said he would wonder over a beer in his car out front. “The answer’s, like, ‘none.’”

The home was near the family’s synagogue. Observant Jews, they would frequently walk there according to Sabbath tradition, tailed by about 15 Secret Service agents.

“Outside the building they may be one of the most famous couples in America, but inside the synagogue they are just a young Jewish couple trying to raise their children in the Jewish tradition,” said Rabbi Levi Shemtov, the executive vice president of American Friends of Lubavitch (Chabad) and spiritual leader of their congregation, TheSHUL of the Nation’s Capital in Kalorama.

One of Ms. Trump’s contributions to Washington’s cultural community was unwitting. In 2019, a Washington conceptual artist, Jennifer Rubell, created “Ivanka Vacuuming,” in which a 16-year-old look-alike of Ms. Trump vacuumed up crumbs tossed by onlookers onto a pink carpet.

“I truly did not intend the piece to be only a critique of her. I thought it was just as indicting of the viewer and all of us in our perception of her,” Ms. Rubell said in an interview. “I invited her to see the show. I was so naïve — I thought she would think it was kind of funny.”

Instead, Ms. Trump tweeted: “Women can choose to knock each other down or build each other up. I choose the latter.” Conservative commentators and Ms. Trump’s brothers denounced Ms. Rubell’s work. The artist said she received death threats.

To the artist and her colleagues, it was a turning point in Ms. Trump’s real-life persona, from perceived moderating influence to conservative culture warrior.

By the time the 2020 campaign was in full swing, all the liberal hopes that Ms. Trump carried with her to Washington were long gone.

“For the first time in a long time, we have a president who has called out Washington’s hypocrisy, and they hate him for it,” she declared on the White House grounds at the Republican National Convention. “Dad, people attack you for being unconventional, but I love you for being real.”

Days before the election, she declared, “I am pro-life, and unapologetically so.”

Such pronouncements appear to have made Manhattan re-entry all but impossible, at least for now.

“As soon as she ditches the District of Columbia for the old pad she owns with Kushner at Trump Park Avenue in Manhattan, she’ll beg to be back on the scene,” Artnet News warned on Nov. 6. “In 2017, the art world organized a series of social media campaigns, protests, and performative actions under the banner ‘Dear Ivanka,’ urging her to push back against her father’s hateful and divisive platform. That, um, did not work.”

Not everyone expects such turbulence. “I think she’s a wonderful, smart person, and she’s handled the situation really, really well,” Georgina Bloomberg, whose father, Michael Bloomberg, spent more than $1 billion of his fortune to defeat Mr. Trump, told The Daily Beast this month. “At the end of the day it’s her father, and she’s very quick to get a lot of criticism that she doesn’t deserve.”

Business-wise, Ms. Trump and Mr. Kushner will not lack for options, given the Kushner family money. Two people who know the couple said Ms. Trump might be able to resurrect her jewelry and clothing brands, retargeted to her new conservative fans, but two more say that line would not sell.

“Kushner’s in the real estate business,” Mr. Deutsch said. “You can do real estate deals, and if he’s doing anything with the Trump name he can monetize it in red areas.”

Nobody rules out politics for Ms. Trump, either as candidate or king maker.

“If I’m trying to keep my Senate seat or I’m running in the governor’s races in Michigan, Wisconsin or Pennsylvania, not only do I want President Trump, I want all the Trumps there,” Mr. Nunberg said.

“I think Ivanka is able to live in two worlds: Trump-conservative populist and — I don’t say this in a derogatory way — Nikki Haley-country club-Jeb Bush Republican,” he said.

Manhattan society is a different story. Christopher Buckley, a comic author who satirized the Trump administration in the novel “Make Russia Great Again,” said, “Washington tends to be more tolerant of fellow swamp creatures, who are continually in and out of favor.”

That does not extend to “Manhattan, where ‘in’ and ‘out’ lists are sacred tablets,” he added, concluding, “There might be more Grubhub than La Grenouille in their dining future.”