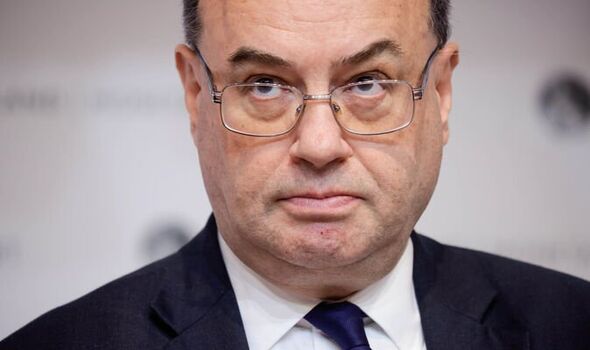 Governor Mr Bailey fears a further inflation surge is a “major worry” as the conflict disrupts supplies of wheat, cooking oil and other essentials from the region.

He urged high-earning UK employees not to demand bumper pay rises, to reduce the threat of a damaging wage-price spiral.

But £575,000-a-year Mr Bailey, below, admitted the bank’s policy chiefs have felt “helpless” in the face of soaring price rises.

He said: “It’s a very, very difficult place for us to be in. This is a bad situation.” He delivered his grim forecast for the UK economy to the Commons Treasury Committee yesterday, adding that 80 percent of the factors which are pushing up prices come from overseas.

The Ukraine war was the biggest driver of inflation, with export crops unable to leave the country due to the fighting.

Mr Bailey warned MPs: “Ukraine and Russia is the big risk in a way. One is the risk of a further energy price shock, which would come from the cutting-off of gas and distillates, such as products like diesel.

“And then, the one which I might sound rather apocalyptic about is food.”

Mr Bailey added Ukraine’s finance minister had said food supplies were stuck there: “While he was optimistic about crop planting, as a major supplier of wheat and cooking oil he said ‘We have no way of shipping it out’.

The problem worsened yesterday as India said it is restricting wheat exports due to a heatwave and prices rose five percent to a record high. Mr Bailey rejected criticism from ministers and MPs of the bank’s failure to foresee the extent of the inflation surge. Initial forecasts of a five percent peak have been replaced by fears of 10 percent this year.

The governor told MPs: “There has been a series of supply shocks and most recently with the impact of the war, Russia’s invasion of Ukraine. We can’t predict things like wars – that’s not in anybody’s power. I don’t think we could have done anything differently.”

Mr Bailey’s downbeat analysis came as diesel hit a record high of more than 180p a litre. The RAC said wholesale prices rose on the back of efforts to cut imports from Russia.

Three weeks before Russia invaded, the average litre was 150.0p.

Petrol is a typical 166.7p per litre, close to its record 167.3p on March 22. The RAC’s fuel spokesman Simon Williams said: “Drivers with diesel vehicles need to brace themselves for yet more pain at the pumps.”

Meanwhile Mr Bailey said high earners should “think and reflect” before asking for pay rises, adding: “I am not preaching about this. I had asked the Bank not to give me one, because I felt that was the right thing for me.

“But everybody must make their own judgment on that.” Mr Bailey told the committee he was taken by surprise by the UK labour market shrinking after the pandemic.

The governor and senior colleagues speculated that the fall was the result of Long Covid absences and other pandemic health issues, plus workers deciding to take early retirement. He said: “Since 2019, we’ve seen a fall of around 450,000, or 1.3 percent.

“It represents a three percent increase in the number of economically inactive people, meaning someone who isn’t searching for a job unlike an unemployed person who is looking for one.

“The scale and persistence of this drop has been a surprise to us.

“We have seen an increase in long-term sickness in that number of about 320,000 people, and so what we’ve done in the main monetary policy report is to lower the projected view of labour participation.

“We now expect that to be flat at 63 percent of the working-age population. We originally thought we might have a recovery to 63.5 percent.”

Mr Bailey feared the Bank was facing the biggest challenge to its monetary policy framework in 25 years.

He defended its independence, following suggestions from some Whitehall sources that ministers may seize back control of interest rate policy to try and meet the target of keeping inflation below two percent.

Michael Saunders, a member of the Bank’s Monetary Policy Committee, warned the hearing there was no upside to the price surge, adding: “High inflation is a bad thing for the economy; there is no sense in which it is good.”

Against the backdrop of soaring inflation, rising energy bills and high fuel prices, a minister came under fire yesterday for suggesting that people struggling in the cost-of-living crisis should consider taking on more hours at work or moving to a better-paid job.

Rachel Maclean, who holds the safeguarding brief in the Home Office, admitted the idea would not work for all households but told Sky News: “What we need to focus on now is over the long term. We do have these short-term pressures on us.

“But over the long term we need to have a plan to grow the economy and make sure that people are able to protect themselves better, whether that is by taking on more hours or moving to a better-paid job. That is what we are focused on as a Government. It may be right for some people, they may be able to access additional hours, but of course it is not going to work for people who are already in three jobs.

“That’s why we need to have the other measures, such as all the help we are putting into schools, the help with the local authorities…and that’s where we are going to target help to where it is most needed.”

Labour frontbencher Ian Murray said the “ludicrous” advice appeared to hark back to Prime Minister Margaret Thatcher’s era. The shadow Scotland secretary said: “Sounds like the Norman Tebbit’s ‘Get on your bike’ instructions from the 1980s.

“It’s so out of touch with reality that I’m sure the minister knows how ludicrous it is, but they’ll defend Boris Johnson at all costs.”

“Millions are working flat out but are still struggling to cover the basics.

“It’s a bit rich for ministers to tell people to find better-paid work – especially when they have presided over an explosion of low-paid and insecure jobs.”

Ms Maclean said later on LBC “nothing is off the table” for supporting people in the crisis: “The Chancellor always keeps everything under review. What we want to do is make sure we are protecting families and help them to weather the storm.”

Bank of England Governor Andrew Bailey is half right to be gloomy but there are reasons for optimism.

Recessions can have multiple causes, and some are more serious.

In 2008, the world saw a balance-sheet recession coupled with a banking crisis. Dips of that sort hurt and tend to see slow recovery.

Now we have pandemic and Ukraine crises. Mr Bailey warns of a “real income shock” coming from energy and “apocalyptic” food prices. This downturn will hurt the poor and the Government should do all it can to support the vulnerable.

But it is not all doom. The economic shock, however unpleasant, will not be long-lived.

Energy suppliers are doubling down on alternatives to oil and gas, and households will seek greater efficiency. As a result, the energy crisis will begin to ease by late winter, if policymakers react appropriately.

As for supply chains, companies will look for substitute products and sources of supply. For example, while Ukraine is a major supplier of sunflower oil, alternatives such as rapeseed can be used.

Ukraine is a major supplier of purified neon but other companies can replicate its infrastructure. Assuming the crisis lasts for some time, these alternatives will emerge.

The long-term result will be a rethink of how supply chains operate and are managed.

In the medium term we will see alternative suppliers emerge and shortages will ease. As a result, recovery should begin in earnest relatively quickly.

Mysterious Ailments Are Said to Be More Widespread Among U.S. Personnel