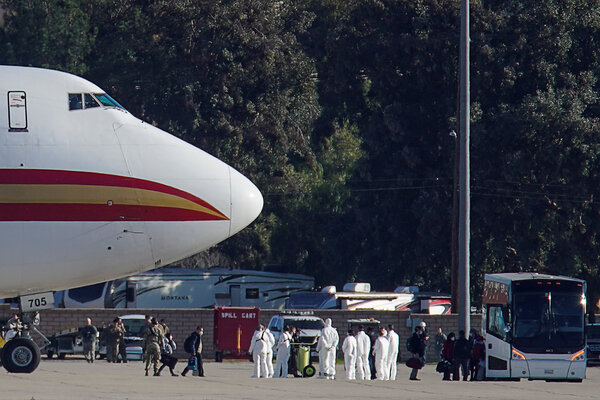 The government’s confused effort to retrieve Americans overseas during the early weeks of the coronavirus outbreak compromised the safety of the evacuees, federal employees and communities near where Americans returned to, according to a new report published on Monday by Congress’s nonpartisan watchdog.

The effort was so dysfunctional that federal health agencies could not even agree on the purpose and terms of the mission, contradicting one another about whether it was classified as an evacuation or repatriation.

The more-than-yearlong investigation by the Government Accountability Office concluded that the evacuation of Americans from China bogged down badly as different divisions within the Department of Health and Human Services argued over which was responsible. That fighting undermined the earliest attempts to protect those Americans after they returned from China, where the coronavirus was believed to have originated.

The G.A.O. said three agencies within the department — the Centers for Disease Control and Prevention, the Office of the Assistant Secretary for Preparedness and Response, and the Administration for Children and Families — “did not follow plans or guidance delineating their roles and responsibilities for repatriating individuals during a pandemic — an event these agencies had never experienced.”

The report built on previous reviews of the repatriation effort by health department lawyers and a whistle-blower complaint filed early last year. Last April, the department’s top lawyer concluded that federal health employees without adequate protective gear or training interacted with Americans quarantined at the base, validating the whistle-blower’s central complaint.

According to the G.A.O. report issued Monday, as the Administration for Children and Families, or A.C.F., began its role overseeing the repatriation of the evacuees, lawyers at H.H.S. determined that the flights from Wuhan, China, constituted an evacuation, not a repatriation, and therefore were the C.D.C.’s responsibility.