He’s proud, he’s scared, and, as he prepares to help in the fight against coronavirus, Ricky Baker, a student nurse, is angry. He’s upset that his year group, the first to be asked to risk their lives in this way, is also the first to have paid £9,250-a-year tuition fees.

More than 15,000 second and third-year nursing and midwifery degree students have opted in to fight the pandemic, helping make up for the 40,000 shortfall in nurses in the NHS. All will be graduating with huge debts – in many cases nearly £60,000 – the result of the government’s decision to scrap the NHS bursaries. To add insult to injury, those graduating this year will have missed out on the new £5,500-a-year grants towards living costs that the government is introducing in September to try to boost falling recruitment.

Since 2017 student nurses have paid tuition fees as well as taking out big loans to cover living costs, with those from the poorest backgrounds borrowing the most. Baker,28, a third-year nursing student at Worcester University, who is waiting to hear where he will be deployed, says: “Many nursing students will have debts approaching £60,000 as we finish our degrees on placements that could cost us our lives.” 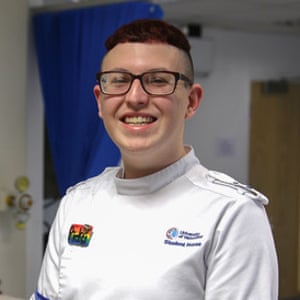 Baker, shortlisted as a Nursing Times’ student nurse of the year, says he has really felt the loss of the bursary. In a typical week, as well as his 37 hours unpaid on the ward for his training placement, he also works two or three 12-hour shifts as a healthcare assistant to help with living costs, which include travel to and from his placement.

He loves nursing and is proud to be helping in the crisis, but he adds: “Like other students, I am scared. My university has been great, but our degree has been turned upside down and our final weeks of learning will be working. What is the government going to do for us?”

The student nurses’ financial plight has drawn the attention of MPs. Last week more than 80 MPs, including Diane Abbott, Stella Creasy and Jess Phillips, signed a letter calling on the health secretary, Matt Hancock, to cancel the debt of students stepping in to fight the virus.

Sarah Owen, MP for Luton North, who wrote the letter, says cancelling the debt would send an “important signal” to those starting their nursing careers that they are valued by the government.

Katy Williams, a third-year student nurse at Edge Hill University, in Lancashire, who has signed up to work, says: “It is a scary thought having so much training left and being put on the frontline. It’s daunting and gives me huge anxiety, especially at night, when I struggle to sleep. But I am happy to help, knowing those patients have loved ones.”

Williams will graduate with £48,000 of debt. She says: “I absolutely agree with the MPs who are saying student nurses’ debt should be scrapped for those stepping up. We haven’t been told to work on the frontline. We have volunteered. We know the risks and we’re still happy to help. Shouldn’t that be recognised by the government?”

Doctors, nurses, porters, volunteers: the UK health workers who have died from Covid-19

She is angry that nurses are expected to pay the same fees as other students, and says removing the bursary has had a “huge impact”. Like Baker she has a part-time job on top of her 37 hours a week working unpaid on placement, a stark difference from the “laid-back approach to learning” she notices among students in other faculties.

“We do endless hours of working in the NHS for free alongside all the exams, deadlines and assignments. Placements are very hard. A student nurse could be working a 14-hour day and dealing with very emotional situations.”

Already, two healthcare students have died of the virus. One, Julie Omar, an experienced nurse at the Alexandra Hospital in Redditch, who was studying for a health sciences degree at Baker’s university, died two weeks ago.

Prof David Green, vice-chancellor of Worcester University, says Omar had had been an invaluable mentor to nursing students for years, making sure they had a friendly, expert to turn as they tackled the reality of practice. “We want to come together to mourn the loss of Julie but, as we can’t at present, students and staff have created an online book of remembrance which we will give to her family.”

And Middlesex University announced on Wednesday that Ade Raymond, a first-year mental health nursing student who was also a healthcare assistant at Barnet, Enfield and Haringey NHS trust in London, had died of Covid-19. A spokesperson for the university says students and staff have been “deeply affected”.

Another final-year student nurse, at a university in the south of England, who wishes to remain anonymous, says: “None of us chose nursing for the money; patients are our number one priority. But the extent to which our cohort has been financially disadvantaged cannot be ignored.”

She says that because nurses have to spend 2,300 hours on placement during their degree it is much harder for them to support themselves with enough paid work. As a result, like many of her course-mates, she has taken out the full maintenance loan and will graduate with nearly £58,000 of student debt.

“Due to the immense pressure the NHS is under I, like many others, have often found myself counted as one of the workforce during my placement, rather than as a supernumerary. Essentially we are paying £9,250 a year to work.”

The Royal College of Nursing welcomes the introduction of £5,500 grants for nursing students but warns: “This is only the start of what is needed to address the workforce crisis.”

A spokesperson says: “Forcing student nurses to pay tuition fees has been a disaster. Numbers applying fell dramatically at the moment frontline shortages were soaring. These fees are a barrier to safely staffing the NHS and care, and should be removed.”

Prof Green has described the removal of the bursary as a “bad and mad policy”, and says there is “no doubt” it put thousands of mature students off training to be nurses and midwives. The new grants are a positive step forward, he agrees, but he says the government needs to go further.

Green is also worried that the modern universities, who typically train nurses, could be the ones whose finances are hit hardest by the coronavirus. “Many of the universities who are essential for training nurses around the country are in danger of having a heart attack in the next year,” he says. “There are about 300,000 health education students in this country and the government has to make sure institutions are able to continue to train them.”

Man arrested after shots fired at police in Northland

University Guide 2021: university profiles from A to Z