Walter LaFeber, a Cornell University history professor and author whose unvarnished version of American diplomacy drew hundreds of students and spectators to his Saturday morning lectures, and whose acolytes went on to influence the nation’s foreign policy, died on Tuesday in Ithaca, N.Y. He was 87.

His daughter, Suzanne Kahl, confirmed the death, at an assisted living facility.

Professor LaFeber (pronounced la-FEE-ber) did not like to label himself or others, but he was widely considered to be a “moderate revisionist.” He was a disciple of the so-called Wisconsin School of diplomatic history inspired by William Appelman Williams, which challenged conventional accounts of American exceptionalism by suggesting that United States foreign policy was also motivated by imperialism.

Professor LaFeber valued the roles that institutions played in shaping history, but he never underestimated the influence of individuals. He enlivened his books and lectures by fleshing out characters from Aaron Burr and John Quincy Adams to George W. Bush and even Michael Jordan. His book “Michael Jordan and the New Global Capitalism” (1999) was about basketball as a metaphor for globalization.

While he could condemn without demonizing, he had no compunctions about exposing hypocrisy. Just before Independence Day in 1983, in response to Secretary of State George P. Shultz’s declaration that the United States would not tolerate Central American revolutionaries “shooting their way into the government,” Professor LaFeber wrote in a New York Times Op-Ed article, “Given George Washington’s and Thomas Jefferson’s dependence on American riflemen, it is well for Fourth of July celebrations that Mr. Shultz’s law cannot be applied retroactively.” (Mr. Shultz died last month.)

His scholarly career “indicates that he had imbibed the Wisconsin lessons of empiricism, criticism, and a suspicion of power,” Andrew J. Rotter and Frank Cosigliola wrote in 2004 in the journal Diplomatic History.

“In his nearly half-century of writing,” they concluded, “LaFeber has won deep respect among scholars and students of U.S. foreign relations for his ability to analyze a complex historical topic with clarity and brilliance.” 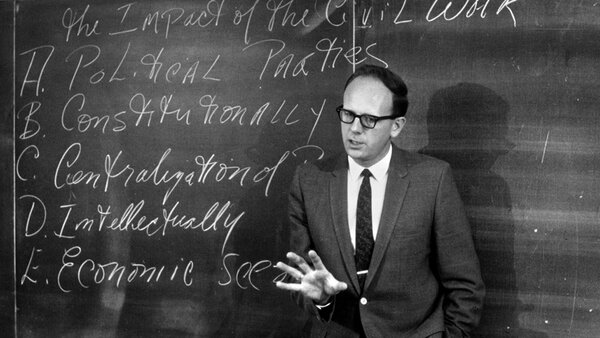 Professor LaFeber thought the war in Vietnam was a mistake, resulting from contradictory policy objectives. He was also a champion of racial justice. But he argued in 1969 that Black students armed with rifles who seized the student union building at Cornell had gone too far. He resigned as chairman of the history department to protest attempts by the university’s president to placate the demonstrators.

“What a university is all about is rational discourse,” he was quoted as saying in “Cornell ’69: Liberalism and the Crisis of the American University” (1999), by Donald Alexander Downs. “What these people were doing was essentially raping the major principle of the university. Once you introduce any kind of element of force into the university, you compromise the institution. To me, that is totally unforgivable.”

He continued: “I’m a relativist in terms of object and conclusion. I don’t think I am necessarily right. What I am absolutist about is the procedure you use to get there. Which means the university always has to be open and it cannot be compromised.”

His students included the future foreign policy experts Samuel R. Berger, who served as national security adviser under President Bill Clinton, and Stephen J. Hadley, who held the same position under George W. Bush; Eric S. Edelman, who was under secretary of defense for policy in the Bush administration; William Brownfield, who served as assistant secretary of state under Barack Obama; former Representative Thomas Downey, a Long Island Democrat; and the history professors Susan A. Brewer of the University of Wisconsin-Stevens Point, Lorena Oropeza of the University of California, Davis, and Nancy F. Cott of Harvard.

“His brilliant lectures on American foreign relations at Cornell persuaded me to specialize in diplomatic history as a graduate student,” Professor Brewer said by email. “Along with the Monroe Doctrine and the Yalta Conference, there was room for Herman Melville, Jane Addams and John Wayne.”

Professor Cott recalled: “Since I was only a student in his large lecture class, I assumed he did not know who I was. But when I published a book about Mary Ritter Beard in 1991, LaFeber, who was a great admirer of Charles Beard, Mary Beard’s husband and sometime co-author, wrote me a fan letter about the book! I was stunned and felt extremely honored by his awareness as much as his praise.”

Walter Frederick LaFeber was born on Aug. 30, 1933, in Walkerton, Ind., a small town near South Bend. His father, Ralph Nichols LaFeber, owned a grocery store, where Walt started working when he was 8. His mother, Helen (Liedecker) LaFeber, was a homemaker.

After a stellar basketball career in high school (he was 6-foot-2), he graduated from Hanover, a Presbyterian liberal arts college in southern Indiana, where a professor whetted his appetite for history. He went on to earn a master’s from Stanford University in 1956.

As an undergraduate, he had been relatively comfortable with the foreign policies of Republicans like Senator Robert A. Taft and President Dwight D. Eisenhower. He became more critical after he entered the University of Wisconsin, where he studied under Professor Fred Harvey Harrington and where he and two other future professors, Lloyd C. Gardner and Thomas J. McCormick, were recruited to be William Appleman Williams’s teaching assistants.

In 1955, Professor LaFeber married Sandra Gould, whom he had met at Hanover. She and their daughter survive him, along with a son, Scott; two grandsons; and a granddaughter.

After he earned his doctorate in 1959, he was hired as an assistant professor at Cornell, joining a star-studded roster of political scientists like Allan Bloom, Andrew Hacker and Theodore J. Lowi. He became a full professor in 1967 and, unlike many colleagues, continued to teach undergraduates regularly. The students in his class “History of American Foreign Relations” gave him standing ovations.

His formal dress gave him gravitas in an era of growing turmoil on campus.

“Wearing a tie to teach, for example, might signify a belief that teaching is a different and more serious enterprise than anything else he does,” Professors Rotter and Costigliola wrote in 2004. “Certainly the decision to look very different from how he sounded, to create and then confound expectation in this way, gave LaFeber a special authority of the sort often lacking in radicals in the 1960s-’70s. It was in part because of the contrast in form and substance that students paid attention.”

In 1976, Professor LaFeber was the first faculty member invited to deliver Cornell’s commencement address, and in 2002 he was named the first Andrew H. and James S. Tisch distinguished professor. In 2006, some 3,000 Cornellians filled the Beacon Theater in Manhattan to hear him deliver what was billed as his farewell lecture, titled “A Half-Century of Friends, Foreign Policy and Great Losers.”

His books include “The New Empire: An Interpretation of American Expansion, 1860-1898” (1963); “Creation of the American Empire: U.S. Diplomatic History” (1973); “The Panama Canal: The Crisis in Historical Perspective” (1978), which was credited with nudging the Senate into ratifying the treaty relinquishing the canal (National Review called its support of the treaty “predictable”); “The American Age: U.S. Foreign Policy at Home and Abroad Since 1750” (1989); “America, Russia and the Cold War” (the most recent edition of which was published in 2006); and “The Deadly Bet: LBJ, Vietnam, and the 1968 Election” (2005).

Professor LaFeber’s books won praise for placing American foreign policy in the context of domestic politics and the sometimes neglected agendas of other nations. He also took the long view of history, which was a prudent perspective for a fan of the Chicago Cubs, a team that before 2016 had not won a World Series since 1908.

“As someone once said,” Professor LaFeber noted, “‘Anybody can have a bad century.’”

Kerre McIvor: Critical maths – our kids are the collateral damage after years of teaching decline

Higher education in the UK is morally bankrupt. I’m taking my research millions and I’m off