The University of Manchester has announced a two-week rent reduction for students in their accommodation, following protests on campus.

Students will also be able to leave their accommodation whenever they want without receiving a financial penalty, under the new plans.

However, the measures have done little to placate a university rent strike group, who said the move was “not good enough”.

“This morning we were given an insulting offer of two-week rent reduction,” UoM Rent strike tweeted on Tuesday.

The group have said they want at least a 40 per cent rent reduction for the rest of the academic year, and this demand “remains the same” following the announcement.

Rent strikers have occupied a building on campus, refusing to move until they meet with the vice-chancellor and their demands are met. The occupation of the disused accomodation block will continue, the group said following Tuesday’s announcement.

The group are seeking a reduction to their rent after face-to-face classes were halted and a series issues with accommodation, with one striker telling The Independent he was unhappy with the cost of fees while campus facilities were reduced due to coronavirus.

A University of Manchester spokesperson told The Independent senior staff met with student representatives over the weekend to discuss concerns raised by students, and new measures have since been announced including “a reduction in rent, more flexible accommodation contracts, and increased study spaces”.

The five-point charter – which also promises to tackle anti-social behaviour and better maintenance support – has been backed by the Students’ Union, they said.

The two-week reduction in rent for all students in their accommodation works out at about 20 per cent off the remaining weeks this term, according to the university – where most teaching was temporarily pushed online this term amid a surge in local coronavirus infections. 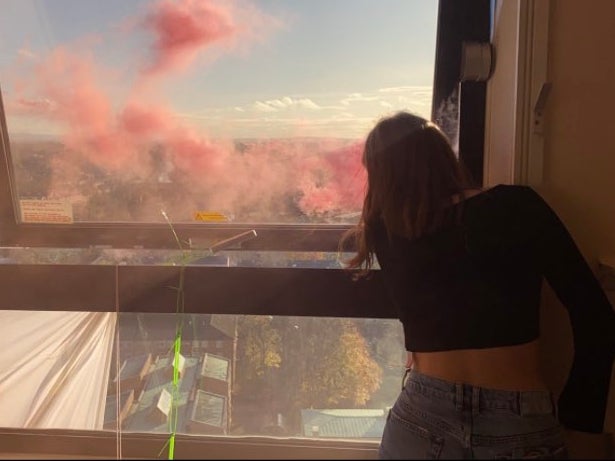 The National Union for Students told The Independent  last week university students across England should get a rent rebate if they follow government guidance and go home for Christmas early December during the suggested “travel window”.

Students at Manchester Metropolitan University and the University of Glasgow were offered rent rebates this term, after outbreaks sent hundreds into self-isolation.

The University of Manchester has faced protests since the start of term, including after fencing was put up around campus on the day England’s lockdown started – although students told The Independent  the demonstration was about wider concerns too.

An inquiry has since been launched into the decision-making and communication around the matter. Students told The Independent they had received no warning or information about the fencing before finding themselves surrounded.

A separate investigation has been launched after a student claimed he had faced racial profiling by security guards – who have since been suspended – on campus.

How to Make Remote Learning Work? Unmute Yourself!

‘Only a zealot would oppose’: should the UK nationalise struggling private schools?