Pupil premium funding used to boost the education of the poorest children should be trebled, says the boss of a leading academy chain.

Disadvantaged children were hit hardest by the lockdown, says Steve Chalke, founder of the Oasis Trust which runs 53 academies in England.

The learning gap between disadvantaged pupils and better off children “has become a gulf”, he claims.

The government says it has already allocated £1bn to help pupils catch-up.

But Mr Chalke questions whether enough of this funding is earmarked for the pupils in most need.

Oasis Trust focuses on running schools in deprived areas, and Mr Chalke says he is particularly concerned by recent research which suggests pupils at schools like these fell further behind than better-off children during the lockdown.

Their teachers will have a tougher job of helping them catch up, he says.

The Chancellor has cancelled this autumn’s budget to focus on emergency support during the pandemic.

Mr Chalke argues this support should include a fundamental rethink of the pupil premium, which was introduced by the coalition government in 2011 to boost the education of disadvantaged children.

It is a cash bonus paid to schools for any pupil who has been eligible for free school meals at any point during the previous six years, or for pupils who have been in care for more than six months continuously.

Mr Chalke argues more money is needed, specifically targeted at poorer pupils whose learning has been so badly harmed by the lockdown.

“Government should respond to the need before it causes irrevocable damage by trebling this funding, at least over the next three years, and focusing it on children living in persistent poverty and facing long-term disadvantage,” he argues.

“It is vital that government makes this move now, to ensure that a generation of children, already disadvantaged before the Covid-19 lockdown but whose situations have deteriorated even further, are not completely abandoned, doomed to spend their lives struggling for opportunities their peers will have ready access to, rather than flourishing,” he said. 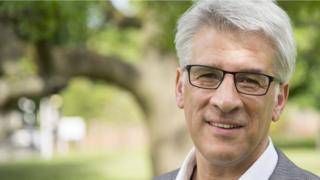 Mr Chalke also says the government’s £350m National Tutoring Programme which is aimed at helping the most disadvantaged pupils catch-up after the lockdown “is far too little”.

This funding, for just one academic year, will not address the “aching long-term need to narrow the disadvantage gap”, he says.

“It is the equivalent of a very poor quality sticking plaster being stretched across a wound that is far too deep to be healed by short-term interventions.”

Mr Chalke argues that the whole designation of this money as “catch-up funding” is wrong.

“The focus on academic achievement, accompanied by a ‘teach to the test’ education strategy, fails totally to recognise the heart of the issue.

“Despite the fact that there is, at last, a focus on student wellbeing in the national curriculum, until we develop an education strategy that commits cash and learning time to working with the adverse and traumatic childhood experiences that many disadvantaged students suffer, and have suffered through lockdown, we are wasting public money.

“That’s why the attainment gap has never been tackled successfully, despite the many millions already spent on improving outcomes for disadvantaged students.”

In a statement, the Department for Education said the best place for disadvantaged children was back in school, where the government’s £1bn Covid catch-up package was “tackling the impact of lost teaching time”.

This includes £350m for disadvantaged students through the National Tutoring Programme, “which is in addition to our £2.4bn pupil premium to improve these pupils’ attainment and outcomes,” said the statement.

“Head teachers and school leaders are best placed to make decisions about their pupils and which of them need the most support,” said the spokeswoman.

Staycations or charity work? Ideas for a Covid gap year

University Guide 2021: university profiles from A to Z

Higher education in the UK is morally bankrupt. I’m taking my research millions and I’m off