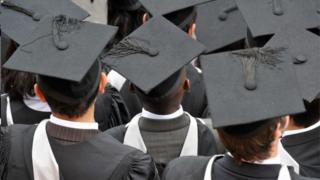 Hundreds of thousands of students, who have missed out on their studies during lockdown, are being asked to sign up for a “mass action” for compensation.

The National Union of Students (NUS) wants debt relief and compensation for students who have faced disruption since universities closed their doors.

But NUS President Zamzam Ibrahim says this approach means students have “less rights than if we’d booked an Airbnb”.

Hundreds of thousands of students are paying for an education they are simply not getting, according to the NUS, which is launching its UK-wide campaign on Wednesday.

The union says its own research suggests one in five students have been unable to access their learning at all during lockdown, while one in three say it has been of poor quality.

Those particularly hard hit are:

The Scottish government has announced support for students over the summer.

So far more than 500,000 students have signed a series of petitions asking for fee refunds, but the NUS says institutions face significant financial challenges due to the pandemic and will struggle to foot the bill without government support.

“We’re calling today for students to sign up to our mass action to win fair compensation either through a redo, write-off, or reimbursement,” said NUS Vice President for higher education, Claire Sosienski Smith.

“We know the scale of this disruption has been so vast that we need a national sector-wide response from government for this, including funding from Westminster.

“Even if students complain to their individual institutions, how will universities afford it when the UK government haven’t announced a single penny of additional funding to support them?” she asked.

At London’s prestigious Royal College of Art, just under half of students have signed a joint complaint about the standard of learning they have received this term, asking to be refunded a third of their fees.

Student Ed Compson, who is co-ordinating the campaign, is in the second year of a masters in painting and says the college has moved teaching online.

“But for students whose practice is studio-based this is unfeasible and even if they still get a good degree at the end, it is worth little without the time art students need to spend in studios, developing their practice.

“More than anything it’s about building a portfolio,” he says.

He says that for him the lockdown came at a very bad time, just as he was building on 18 months of experimentation towards the work that would form his degree exhibition.

And moving the crucial end-of-year degree show online is of no use to art students whose practice is studio based, he says.

Students have asked for access to studios over the summer or next year but fear the college will prioritise income from summer short courses and from next year’s intake of new students.

Several dozen students are now unable to pay their fees, having lost their part-time jobs during the pandemic and have been suspended by the college, says Ed, and international students in this position could face deportation under government rules on student visas.

The RCA said it had “endeavoured to provide the best quality learning experience for students during the pandemic, following all government and regulatory requirements”.

“Our student support team is constantly working to help students with hardship and payment plans, as well as to offer counselling during what has been a difficult time for everyone,” it said in a statement.

“There’ll be no summer short courses this year while we undertake the complex work of adapting and preparing our buildings for returning and new students in September.”

NUS president Zamzam Ibrahim believes the scale of the problem for students is too large to be handled through existing local processes.

“The UK government are desperate to reduce this to a series of individual problems.

“It’s a total betrayal of trust to the thousands of students who are now facing lifelong debts for a once-in-a-lifetime education they haven’t received,” she said.

The NUS hopes to work with the sector and with government to solve the issue “in the first instance” but is not “ruling out a more formal action if necessary”.

In a statement, the Department for Education argues that universities are “autonomous” and responsible for setting their own fees so whether a student is entitled to a refund “depends on the specific contractual arrangements between them and their provider”.

“Students should first raise their concerns with their provider and any unresolved complaints at providers in England and Wales should go to the Office for the Independent Adjudicator for Higher Education which has published guidance on this issue,” says the statement.

Fashion graduates have a unique opportunity to make retail sustainable