This article is part of our latest Learning special report, which focuses on ways that remote learning will shape the future.

To grasp the mind-set in rural Lawrence County, Tenn., consider this: After facing two tornadoes in February without warnings from the National Weather Service, residents in May installed their own Doppler radar atop a 75-foot pedestal at the local radio station.

The four-foot domed radar is useless against the storm no one can see: Covid-19. But the same resourcefulness, hunger for pinpoint data and communal spirit that spurred it are giving Lawrence County schools a shot at navigating this wild academic year.

As the pandemic has spread, much has been made of the disparity in resources between urban and rural communities, but a recent visit to Lawrence County showed what can be done.

There is nothing flashy here. In this county, where school board meetings begin with a prayer and the Pledge of Allegiance, Michael Adkins, director of the Lawrence County School System, whose 6,500 students live across 618 square miles, focused planning — and public health practices — on getting as much in-person learning as possible.

In Tennessee, the governor declined to mandate wearing masks. The Lawrence County executive followed suit. But Mr. Adkins was clear: Students, teachers and staff must wear them. “It is part of our dress code,” he said. “My No. 1 goal is to have kids in school, so we will be wearing masks.”

Mr. Adkins made “M.D.S.,” for “Masks, Distancing, Sanitizing” the guide to reopening, and Mr. Luna created public service announcements that ran 10 times a day in July so families knew what to expect. 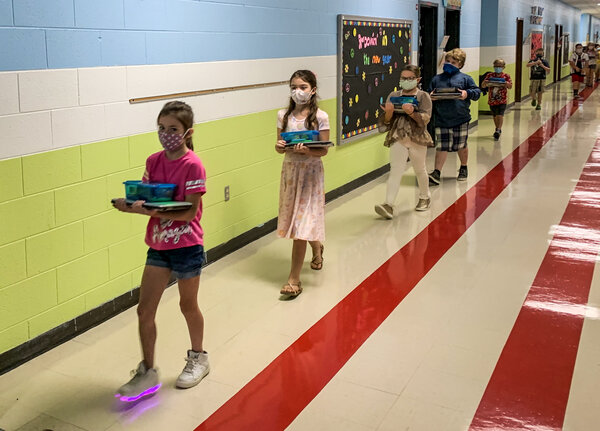 Inside school buildings, social distancing markers dot shining waxed floors. Hand sanitizer is ubiquitous; masked elementary school students reflexively extended palms for a squirt during a library visit. (No browsing the shelves; students use their Chromebooks to search the catalog for books the librarian then retrieves.)

At the high schools, custodians wipe down door knobs between passing periods and sanitize buildings on Sunday and Wednesday afternoons. One-way hallways now often route students outdoors, then back inside to reach the next class.

School bus drivers keep seating charts (only family members may sit together) to aid in contact tracing. At the bus depot, drivers liked to gather for coffee in the morning, but “we had to cut that out,” said Josh Rogers, the transportation supervisor. He fears losing drivers or mechanics to Covid exposure in a district where buses are critical, with many students relying on them for 45-minute rides each way.

And there is a focus on data. Every day at 2 p.m. Jenny Golden, the district’s health coordinator, emails or walks from her office across a parking lot to Mr. Adkins’s office with the latest Covid counts at each of the 13 schools (the Lawrence County Health Department offers free weekday testing). Plus, the numbers of students and teachers in quarantine.

The district has struggled to find ways to provide internet access in areas that barely have cellphone service, let alone broadband, which is critical for online learning. (Data from Broadband Now, a consumer research site, show that just 53 percent of residents have high-speed internet.)

The schools have been working on the problem since March, said Kenneth Hobbs, the district’s director of technology. “We had some ideas in the back of our minds, watching what was happening,” he said.

Teachers now download videos and assignments onto thumb drives (the schools bought 1,000). The district also put weatherproof internet hot spots at schools. But that can be a long drive.

Which is why it recently also fit 10 buses with Wi-Fi antennae, then found locations with electricity (like outdoor pavilions). Loretto Telecom (with CARES Act funding) is running cable so buses can drive up, connect and provide students internet access — should the district need to go completely remote.

School started on Aug. 10 cautiously, with 16 percent of students remote; others had been given a Monday-Tuesday or a Thursday-Friday in-person schedule, with off-days remote.

Through the first month, Covid cases were low. But as school was opening, Mr. Adkins said, “teachers being teachers, all hopped in a car to eat somewhere” after a meeting. The next day, one reported Covid symptoms, forcing all to quarantine.

“We lost five English teachers for close contact,” he said. When two students on the middle school volleyball team tested positive, the team was quarantined.

Nonetheless, the district stuck with its plan. In early September, at Lawrenceburg Public School, a first-grade teacher, Amanda Moore, masked up, led a live phonics lesson for eight students, wearing masks and sitting two to a table.

They bent over individual white boards, grasping markers bearing their names (there is no more sharing) and taking dictation. “How do I spell get?” asked Ms. Moore. “Sometimes in the South we say, ‘g-i-tt,’” she hinted. “So, you have to be careful because it is ‘guh-Eh-tt.’ ”

But the hybrid schedule is hard on teachers. “The first couple weeks were rough,” said Amanda Land, who teaches Algebra I at Lawrence County High School. She posts assignments online and, like many, also makes videos explaining lessons. (When I visited, she had just made one on solving inequalities.)

As a Thursday-Friday student, Jacob Hughes, a Summertown High School senior, arrived late in the week, eager for class. But teachers seemed, he said, “a bit tired out and rightly so.” His classmate Kareena Mahaffey liked that the schedule let her work more hours as a personal shopper at the Kroger’s supermarket. Plus, three days of remote class let her “work at my own pace and not worry about being caught up with the other kids.”

While Mr. Adkins appreciated the public health benefit of the hybrid model, he feared it was not enough to keep younger students on track.

On Sept. 14, after a survey found that 74 percent of teachers favored an expanded schedule, the district changed course and began phasing in a four-day week. A planned Fair Day holiday (even though there is no fair this year) and fall break from Oct. 2 through Oct. 12 offered additional social distancing.

“If we go full speed and it doesn’t work, we won’t visit it again,” Mr. Adkins said.

As students started the four-day schedule, schools had fewer than 10 cases, but numbers in the county were rising. “They have a fair amount of community transmission,” said Dr. Joshua Sharfstein, professor at Johns Hopkins Bloomberg School of Public Health, checking a Covid tracker on Sept. 22. “It is going to be challenging.”

Tight monitoring and the fall vacation may help, but Mr. Adkins knows they may have to go completely remote. Which is a huge challenge in places like Lawrence County.

In urban areas, families without high-speed internet can be handed a hot spot. But, those require a cell signal, which some “out in the boonies,” as one Summertown High School senior student put it, don’t even have. This has complicated the year for families like Jonathan Bradley’s.

Having his son, in second grade, and his daughter, in seventh, attend remotely “was actually the easiest decision.” His son had a heart transplant and is on immunosuppression drugs.

What’s tough is living in an area so rural that he is “grateful for the one to two bars on my cellphone.” Now, he and his wife shuttle their children to his father-in-law’s home, which has internet, to do schoolwork.

There is no doubt: This is going to be an on-again, off-again school year. Ms. Moore, the first-grade teacher, initially worried about students returning. She has asthma and recently lost her grandfather to Covid. But she also saw students without a lot of family support falling behind.

“I could see that gap growing, and I was beginning to panic about how we were going to make up so much lost time,” she said.

In late September, she had 19 in her classroom. There were no mask breaks; she barred students from touching things like the pencil sharpener. She kept her class separate from others, even on the playground. “I cannot let my guard down,” she said.

Students willingly complied. “They seem so happy just to be back, and in a routine,” said Ms. Moore. “Pray, clean, teach, repeat. That’s my motto right now.”