At Huntington secondary school in York this week, the headteacher, John Tomsett, thought he was just about ready for the return of year 10s.

Paul Mussell, the school premises manager, was about to be dispatched to an industrial estate in Keighley to buy up Yorkshire’s remaining supply of hazard tape to mark out 2-metre spacings on the floor. Then Tomsett tuned into the prime minister’s press conference on Wednesday and heard the government’s chief scientific adviser suggest that the 2-metre diktat was “not a scientific rule” and had never been official advice.

“The moment we are ready to welcome back year 10, the government openly discusses the fact that 2-metres is optional and is probably going to go down to 1,” said Tomsett. “It’s the same way they have been gaslighting us with Dominic Cummings.”

He remains incensed the prime minister’s closest adviser got away with bending the rules – if not breaking the law – to drive 500 miles to Durham in case he needed childcare.

“My mother died of Covid during the pandemic in April and I drove 500 miles to Sussex for her funeral, there and back in a day. My sister lives a mile away from where we buried her but I didn’t stay over because I didn’t want to break the rules.”

Until this week, the government had insisted that all primary school children in England would go back for a month before the summer holidays. Then, in a statement to the House of Commons on Tuesday, the education secretary, Gavin Williamson, conceded defeat. Now, he said, “we will be working to bring all children back to school in September”.

It was just the latest screeching U-turn from an education department that effectively left schools to fend for themselves, and has moved the goalposts so many times over the past 12 weeks that teachers and parents are finding it hard to remember how this interminable guessing game began.

That was on 18 March, when Boris Johnson announced all schools in England were to close indefinitely, following similar announcements in Scotland and Wales. 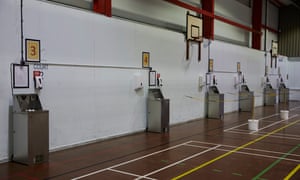 Until June, only the most vulnerable children and the offspring of key workers were allowed to go to school, with everyone else muddling along at home.

Ashley Parry is headteacher of two small primary schools in High Peak, Derbyshire: Thornsett, which has 85 pupils, and New Town, with 73. “Probably the most difficult thing throughout this has been the constant guidance changes,” he said. “I sent a newsletter out to parents at the end of last month and at that point there had been 150 guidance changes. I think it’s 180-something now. It’s just constant.”

The situation in Scotland, Wales and Northern Ireland has been clearer, with the devolved administrations deciding earlier on that children were not returning this school year. But until this week, English schools had been in limbo.

Parry’s schools had been looking after key worker and vulnerable children for more than two months before government decided to tell schools to keep children 2 metres apart, he said: “They’ve been washing hands lots and being sensible, but they are primary school kids. We weren’t able to adhere to the 2-metre rule.”

There are only three classrooms at Thornsett, which is perched on a hillside above the town of New Mills. They are already at capacity, with 29 pupils back from reception, year 1 and year 6, split into three “bubbles” that don’t mix. It was never feasible to have all the children back and abide by physical-distancing rules, said Parry. 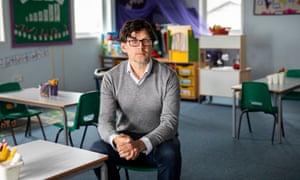 Twenty miles to the north-west. in the Moss Side area of Manchester, Jenny McGarry was having problems trying to get her pupils back full stop. She is the head of St Mary’s, an outstanding primary school with 420 pupils, 90% of whom speak English as a second language. About 70% of students qualify for free school meals.

The government has failed to understand how difficult it can be getting vulnerable children into school at the best of times, she said.

“The relationship between disadvantaged families and school is complex. Often they are families who struggle to engage with school when things are typical. There needs to be an acknowledgment that getting children back to school is not just about having the space but also having the conversation, the hearts and minds part.”

The vast majority of children and many staff at St Mary’s are black or from another ethic minority, a group known to be at higher risk of dying from Covid-19. “There is an added anxiety for them. Parents are anxious. We’ve had a lot of doorstep visits, a lot of phone calls but parents still aren’t completely convinced that school is safe before September so we have very low numbers,” said McGarry.

The school surveyed parents and found 80% did not want to send their children back at all until September. About 30% of staff are unable to come in, either because they are shielding or have family members who are. Even McGarry is coordinating everything at home, being clinically vulnerable herself.

St Mary’s reopened to year 6 on Monday but only five pupils showed up. McGarry has a few theories why. “Some of our families are quite big and they might only be sending one child back and have the rest at home, so it doesn’t make life easier. Also, if you look at our level of free school meals, our levels of unemployment are incredibly high, so that pressure to get back to work is probably felt a little bit less than schools in more affluent areas,” she said. It had not gone unnoticed that the government said parents would not be fined for keeping children at home, she added: “But we are trying to whip up interest on a daily basis.”

‘I don’t feel I can say no’: parents torn on sending children back to school

A month into lockdown, the government announced a scheme to give laptops to all vulnerable and disadvantaged children. But the criteria was so strict that only three of St Mary’s students qualified. They are still waiting for the laptops.

In the meantime, the school bought laptops and iPads for about 15 other families, sometimes showing parents how to set up email addresses for the first time.

“You have other families where the mum is using data on her phone and perhaps four kids all trying to access remote learning,” said McGarry. A less centralised approach would have been better, she said: “If we have been given the funding ourselves we could have gone out and bought equipment right at the start for those who needed it.”

In Sunderland, which has one of the highest number of Covid-19 cases in England (499 per 100,000 people, compared with the English average of 279), staff at Our Lady Queen of Peace Catholic primary school in Penshaw, Houghton-le-Spring, have been working non-stop since February half-term, throughout the Easter holidays and taking just one Bank Holiday Monday off. “We have been particularly lucky and blessed that staff were fit and able to keep working,” said the headteacher, Barbara Reilly-O’Donnell.

Will there be a second wave of coronavirus?

Epidemics of infectious diseases behave in different ways but the 1918 influenza pandemic that killed more than 50 million people is regarded as a key example of a pandemic that occurred in multiple waves, with the latter more severe than the first. It has been replicated – albeit more mildly – in subsequent flu pandemics.

How and why multiple-wave outbreaks occur, and how subsequent waves of infection can be prevented, has become a staple of epidemiological modelling studies and pandemic preparation, which have looked at everything from social behaviour and health policy to vaccination and the buildup of community immunity, also known as herd immunity.

This is being watched very carefully. Without a vaccine, and with no widespread immunity to the new disease, one alarm is being sounded by the experience of Singapore, which has seen a sudden resurgence in infections despite being lauded for its early handling of the outbreak.

Although Singapore instituted a strong contact tracing system for its general population, the disease re-emerged in cramped dormitory accommodation used by thousands of foreign workers with inadequate hygiene facilities and shared canteens.

Singapore’s experience, although very specific, has demonstrated the ability of the disease to come back strongly in places where people are in close proximity and its ability to exploit any weakness in public health regimes set up to counter it.

Conventional wisdom among scientists suggests second waves of resistant infections occur after the capacity for treatment and isolation becomes exhausted. In this case the concern is that the social and political consensus supporting lockdowns is being overtaken by public frustration and the urgent need to reopen economies.

The threat declines when susceptibility of the population to the disease falls below a certain threshold or when widespread vaccination becomes available.

In general terms the ratio of susceptible and immune individuals in a population at the end of one wave determines the potential magnitude of a subsequent wave. The worry right now is that with a vaccine still months away, and the real rate of infection only being guessed at, populations worldwide remain highly vulnerable to both resurgence and subsequent waves.

Staff have pulled out all the stops to try to reassure the children, she said. Some have filmed themselves reading stories and put them on YouTube: “It’s nice for the children to see a familiar face, to give them some certainty that not everything has changed in their life.”

Like all the headteachers interviewed for this story, Reilly-O’Donnell was taken aback to hear Boris Johnson announce this week “a big summer of catchup” for pupils who have missed months of lessons in the lockdown. “Do I want all children to catch up? Well of course I do,” she said. “But we have to explore lots of different avenues how to do that … I’m disappointed we haven’t yet had the opportunity to explore what that might look like and the quality of that provision.”

In High Peak, Parry is categorical his staff will not be working at a summer school, as they are on the verge of burnout after trying to balance the expectations of “parents who expect three Zooms a day and others who just want to be left alone”, he said. “Staff are exhausted. It’s just a non-starter.”

In York, Tomsett does not think schools will be back to normal in September. “I’m planning for three scenarios: a spike happens and we are completely closed, we’re completely open or it’s 50-50. If it goes down to 1 metre we can get half the school back.” Under 2-metre rules they can only fit eight pupils into a classroom that normally seats 30.

He pooh-poohed the suggestion that village halls could be co-opted into “Nightingale schools” providing spillover classrooms.

“If you’ve got coronavirus and you are in hospital, you are either unconscious or unbelievably compliant and just want people to help you. You don’t care if it’s in some warehouse. If you’re a year 10, in a town hall being taught by someone you’ve never met, the situation is completely different.”

He, too, questioned how these pop-up schools would be staffed. While the NHS seemed to have little trouble coaxing doctors out of retirement, the same may well not be true for teachers, he added: “Lots of teachers have gone into retirement for very good reason: because they never want to teach again. It’s completely different. I just don’t understand the government’s thinking.”

Symptom-trackers and doctor dorms: how universities are fighting Covid-19