Home » Business » ‘We Are Forgotten’: Grocery Workers Hope for Higher Pay and Vaccinations

It has been an exhausting 10 months for Toni Ward Sockwell, an assistant manager at Cash Saver, a grocery chain, in Guthrie, Okla. She has been helping to oversee about 40 anxious employees during a deadly pandemic, vigilantly disinfecting counters at the store and worrying about passing the coronavirus to her elderly mother while dropping off produce.

News of the vaccines initially boosted her spirits, but her optimism faded as she learned that grocery store workers in Oklahoma would not be eligible for them until spring.

“When they said we were Phase 3, I wanted to laugh,” Ms. Sockwell, 45, said. “We’re around just as many sick people as we are around nonsick people, just like health care workers, because we are always going to be open to supply food to the public.

“Health care workers are heroes in my eyes,” she added. “But we are forgotten.”

The race to distribute vaccines and the emergence of more contagious variants of Covid-19 have put a renewed spotlight on the plight of grocery workers in the United States. The industry has boomed in the past year as Americans have stayed home and avoided restaurants. But in most cases, that has not translated into extra pay for its workers. After Long Beach, Calif., mandated hazard pay for grocery workers, the grocery giant Kroger responded last week by saying it would close two locations.

And now, even as experts warn people to minimize time spent in grocery stores because of new coronavirus variants, The New York Times found only 13 states that had started specifically vaccinating those workers.

“Grocers are known to have these very thin margins, which they do, but they have been very profitable during the pandemic,” said Molly Kinder, a fellow at the Brookings Institution who has researched retailers’ pay during the pandemic. “Employers by and large, with only a few exceptions like Trader Joe’s and Costco, ended hazard pay months and months ago.”

She added, “If you look at how the virus has gone since then, it’s so much more deadly now.” 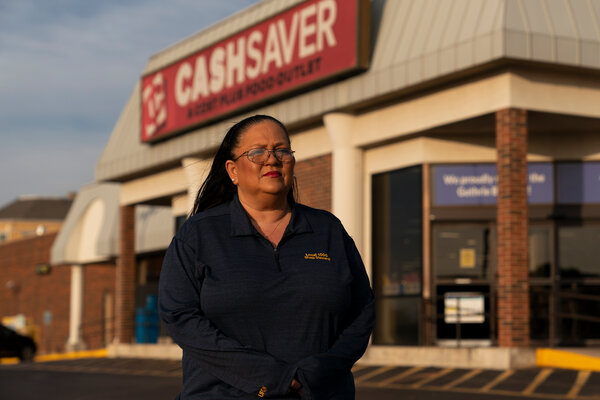 Brookings found that while 13 of the largest retail and grocery companies in the United States earned $17.7 billion more in the first three quarters of 2020 than they did a year earlier, most stopped offering extra compensation to their associates in the early summer. At the same time, some opted to buy back shares and gave big sums to executives.

The tension is especially high on the West Coast, where cities like Los Angeles and Seattle have moved forward with mandates that require hazard pay for essential grocery workers — and are now facing threats of store closures and even an end to food bank donations from grocers.

Bertha Ayala, who works at a Food 4 Less store in Long Beach, was ecstatic after the city enacted an ordinance last month requiring her store, which is owned by Kroger, to pay its workers an additional $4 per hour of “hero pay” to compensate them for the risks they face.

“I love my job,” Ms. Ayala said. “But it has been very stressful.” She said the extra pay was welcome considering the high cost of living in Southern California and as a validation of her sacrifices in going to work.

But only days after the additional money started flowing to Ms. Ayala and her colleagues, supervisors told the staff last week that Kroger was shutting down the store because of the hero pay requirement. Kroger also said it was closing a second store in Long Beach. The employees’ union said it had not been told whether Kroger would move the workers to other locations.

“Kroger is sending a message, more than anything else,” said Andrea Zinder, president of Local 324 of the United Food and Commercial Workers, which represents about 160 employees at the two stores. “They are trying to intimidate workers and communities: If you pass these types of ordinances, there will be consequences.”

Kroger, which operates about 2,750 stores, has attracted particular attention because it pursued stock buybacks last year and because its chief executive, Rodney McMullen, earned more than $20 million in 2019. The median compensation of a Kroger employee that year was $26,790, or a ratio of 789 to 1, according to company filings.

“In 2020 alone, Kroger has invested well over $1.3 billion to safeguard and reward our associates and committed nearly $1 billion to secure pensions for tens of thousands of our associates across the country,” the company said in a statement. “This is in addition to the more than $800 million the company will have invested in associate wage increases from 2018 to 2020 — which are not one-time awards but lasting wage increases.” On Friday, the company also said it would provide $100 to all workers who received a coronavirus vaccine.

Lisa Harris, a cashier at Kroger in Mechanicsville, Va., said the company had not given extra compensation to employees since it ended its $2-per-hour hero pay in May. It occasionally gives workers $100 to spend on groceries, but things are otherwise “business as usual,” she said.

Meanwhile, she said, colleagues are signing cards for one another when relatives die from Covid-19 and dealing with working in a busy store where customers sometimes refuse to wear masks.

“We’ve had people quit, we’ve had verbal alterations between associates because they’re too stressed,” said Ms. Harris, 32, a member of her local U.F.C.W. “It’s rough to get up the courage, which is what it takes to walk in that door each day.”

Seattle recently enacted a hero pay requirement of $4 an hour, which an industry group warned could prompt smaller grocery chains to cut back on donations to food banks and charities or reduce store hours because it was eating into already thin profit margins.

“They care so much about their communities and their employees,” said Tammie Hetrick, chief executive of the Washington Food Industry Association. “Whatever they have to do is going to be such a difficult decision for them.”

Let Us Help You Better Understand the Coronavirus