Home » Business » Wall Street Sees Nothing but Good News, Even When It’s Bad

Deaths and hospitalizations related to the coronavirus are soaring, and many businesses have shelved plans to return to the office. Staffing shortages and supply-chain bottlenecks linger, while consumer confidence has fallen.

And yet, the stock market continued its quietly remarkable year in August, posting its seventh straight monthly rise. The S&P 500 index is up over 20 percent for 2021 and has more than doubled in value since it hit bottom in March 2020. The market has closed at a record high 53 times — the most by this point of the year since 1964, according to LPL Financial.

It’s an ascent that looks out of step with the reality of the virus in many parts of the country, but most investors are confident of two things: The Federal Reserve will keep interest rates at rock-bottom levels, possibly for years to come, and the federal government won’t be shy about spending heavily to keep the recovery going.

“I hate to say it,” said Ed Yardeni, a longtime market analyst and president of the stock market research firm Yardeni Research. “But it looks like we’re learning to live with this virus, and the market certainly has.”

Not everybody expects the rally to continue unabated. And any disruption of investors’ expectations about interest rates and governmental supports — or a big slowdown caused by Delta or some other variant — could alter the persistently sunny outlook.

But so far, the lingering pandemic has lifted the stock prices of companies whose profits are tied to it directly — Moderna’s 260 percent rally this year has made it the S&P 500’s best performer — and those positioned to gain from the messy economic recovery, like metals manufacturers, energy companies and semiconductor makers.

The breadth of the boom was clear in July. Second-quarter earnings results were expected to be generally strong, but trounced expectations: Nearly 90 percent of companies exceeded analyst forecasts, the highest such level of “beats” on record, according to Refinitiv data going back to 1994.

Typically, periods of strong economic growth and red-hot profits are also accompanied by high or rising interest rates, which tend to act as a headwind for stocks. But not this time.

Despite higher-than-expected inflation, the Federal Reserve has signaled it intends to keep rates low even as it prepares to slow — or “taper” — the money-printing and bond purchases it began at the start of the pandemic.

During a closely watched speech last week, Jerome H. Powell, the Federal Reserve chairman, stressed that rate increases were far away, and that the Fed was attuned to the risk posed by the Delta variant of the coronavirus. His comments helped to catalyze a fresh scramble higher for the market.

“I think investors can live with tapering because everyone knows it’s going to happen and it’s been talked about so much,” said Ryan Detrick, chief market strategist at LPL Financial, a brokerage and investment advisory firm. “But knowing rates are going to stay a little bit lower for longer, that’s that cherry on top with an economy that’s overall still improving.”

Such widespread optimism is a far cry from how investors reacted when the pandemic first hit. Stocks plunged 34 percent as the extent of the economic risks finally dawned on them in early 2020. 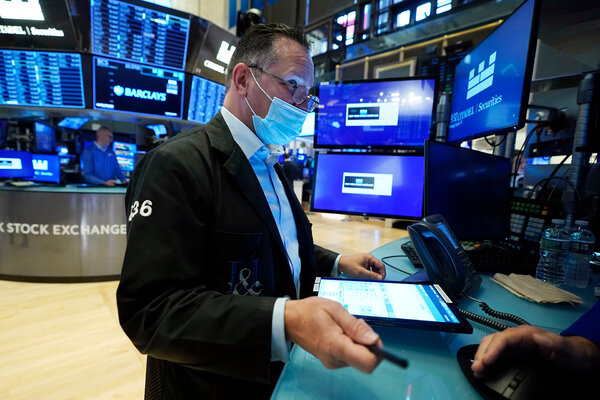 Government and central bank intervention quelled the panic. The Federal Reserve cut interest rates to near zero and began pumping money into financial markets. The Trump administration and Congress quickly enacted trillions of dollars in relief spending for companies and households, cushioning the economy from the worst damage and setting off the market’s climb.

The initial rally centered on stocks that were poised to thrive in a work-from-home world, including online retailers like Etsy, the home exercise company Peloton and suddenly ubiquitous services like Zoom Video.

But the stock surge broadened in November, when favorable results on vaccines lifted expectations of an economic recovery. Businesses including airlines, casino companies and commodities producers began to race higher, too.

As much as the stock market abhors uncertainty, the shifting threat that is the Delta variant has been no match for investors’ confidence that Washington will offer plenty of support — no matter what.

When the S&P 500 this month rose to double its Covid-era low on March 23, 2020, it was the fastest 100 percent rise for the index since World War II, according to Yardeni Research. In roughly 17 months, the rally created nearly $20 trillion in stock market wealth.

Besides the sheer angle of the ascent, analysts have been struck by the smoothness of the rally. The S&P hasn’t suffered a 5 percent pullback since October, according to Mr. Detrick. Even with a 0.1 percent decline on Tuesday, the market is just a day removed from its most recent record high.

It won’t last forever, of course. The market’s seemingly effortless upward glide is bound to hit turbulence — and some experts think it’s likely at some point in the next year.

Mike Wilson, chief U.S. equity strategist at Morgan Stanley, said he believed that there would be some kind of “comeuppance” as the economic picture shifts.

The economy, which is expected to grow at a pace above 6 percent this year, is widely expected to slow. Goldman Sachs recently cut its 2021 growth forecast to 6 percent, from 6.4 percent, citing the Delta variant’s impact. Slower growth could mean less impressive corporate earnings.

And even if the Federal Reserve doesn’t actually raise interest rates, its support for the stock market will weaken as it cuts back on the money-printing and bond-buying programs to which investors have grown accustomed.

Both factors lend themselves to lower stock prices. Mr. Wilson said he believed that the market was due for a correction — Wall Street’s term for a decline of 10 percent or more.

But, he said, the sell-off could be worse the longer the market rises and the further stock prices get out of whack with standard measures of value.

Primark Stung by COVID-19 Closures, and No E-commerce Strategy