Layoffs are rising again and Americans’ incomes are falling, the latest signs that the one-two punch of a resurgent pandemic and waning government aid are undermining the U.S. economic recovery.

Applications for state jobless benefits rose for the second straight week last week, the Labor Department said Wednesday. Unemployment filings are up by more than 100,000 from the first week of November, when they hit their lowest level since last spring, the start of the pandemic.

Forecasters have been warning for weeks that the increase in coronavirus cases could have dire economic consequences as consumers pull back on spending and cities and states reimpose restrictions on businesses and social gatherings. But while job gains and other markers of progress have slowed since the summer, the recovery had proved surprisingly resilient.

Now cracks are beginning to appear. Jobless claims, not adjusted for seasonal patterns, jumped by 78,000 last week to nearly 828,000 — a big change following an increase of 18,000 the week before. It was the first time filings had risen for two straight weeks since early September, and the largest two-week increase since April. Measures of consumer confidence fell sharply in November, and real-time data from private sources show the labor market slowing further or going into reverse.

Any reversal would be disappointing after months of economic progress. But it would hardly be surprising given the new wave of lockdowns and business restrictions that made further layoffs all but inevitable. In recent weeks, Chicago has imposed a new stay-at-home order, Los Angeles County has suspended outdoor dining and Philadelphia has banned most indoor private gatherings. Several states have ended or restricted indoor dining. And even where officials have enacted no new rules, many consumers are likely to restrict their activity voluntarily to avoid contracting the virus.

“The most obvious culprit for rising claims is the surging pandemic,” said Daniel Zhao, senior economist for the career site Glassdoor. “It seems like it was only a matter of time before it started to show up in the economic data.”

The latest data is not universally bleak. The Commerce Department reported on Wednesday that orders for big-ticket goods like machinery, a measure of business confidence, rose in October. New home sales also jumped, as rock-bottom interest rates continue to lift the housing market. Households have $1 trillion more in savings than before the pandemic, money that could fuel consumer spending when vaccines become widely available and the threat of the virus fades. And the stock market, that highly imperfect barometer of the economy, has set new highs.

But for the people and industries most exposed, the outlook is bleak. In addition to the new round of business restrictions, a new wave of school closings could push parents — and particularly mothers — back out of the work force. A growing number of economists are forecasting a “double-dip” recession, in which economic activity contracts again early next year.

Unlike in the spring, families and businesses will have to weather the latest shutdowns largely on their own. Federal programs that provided trillions of dollars of support to small businesses and unemployed workers expired over the summer, and efforts to revive them have stalled in Congress. Many of the remaining programs run out at the end of the year. 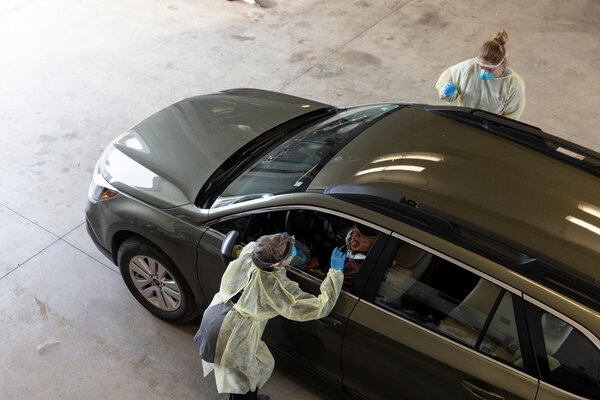 “Part of the reason the recovery has done so well is because there was so much assistance for affected businesses and workers, and this is just really not the time to snatch defeat from the jaws of victory,” said Julia Pollak, a labor economist at ZipRecruiter. More aid, she said, was necessary to “prevent this temporary disruption from becoming permanent destruction.”

Democratic and Republican leaders have both said they want to pass a relief package before the end of the year. But the two sides remain far apart, and prospects for a quick deal appear dim.

Congressional aides and outside groups that have been monitoring the stimulus talks said this week that they did not expect rising unemployment claims to prompt Senate Republicans to agree to anything close to the $2 trillion package that Democrats have wanted for months.

Aides to President-elect Joseph R. Biden Jr. are planning for the possibility of another contraction in the economy and have called on lawmakers to approve a stimulus deal before his inauguration in January. A small group of House Democrats have pressured Speaker Nancy Pelosi to accept a smaller deal in order to reach a compromise with Senator Mitch McConnell of Kentucky, the majority leader.

The stakes are particularly high for the nearly 14 million Americans receiving unemployment benefits through a pair of emergency programs that are set to expire next month.

The data released Wednesday showed that in early November, roughly nine million people were enrolled in the Pandemic Unemployment Assistance program, which covers freelancers, self-employed workers and others who don’t qualify for regular state benefits. That program has been plagued by fraud and double-counting, and many economists believe the Labor Department’s count inflates the true total. Still, by any measure, there are millions of people enrolled in the program who will lose their benefits when it expires.

An additional 4.5 million people are receiving payments through the Pandemic Emergency Unemployment Compensation program, which adds 13 weeks of benefits to the 26 weeks available in most states. Enrollment in it has been rising rapidly as more people reach the end of their regular state benefits.

Some of those people will qualify for a separate federal extended benefits program that existed before the pandemic. But that program isn’t available in every state.

For workers, the timing could scarcely be worse.

“We’re going to be in the heart of winter, virus cases are likely to be through the roof, and the holiday hiring season is over,” said AnnElizabeth Konkel, an economist at the career site Indeed. “It puts those who are potentially rolling off of those benefit programs in a really precarious situation.”

Adding to the risk: Federal rules to block evictions and allow borrowers to defer payments on home mortgages and student loans also expire at the end of the year. The Trump administration could choose to extend them, but if it doesn’t, families could lose their only source of income and lose the protections keeping them in their homes.

“It’s sort of like running into a giant brick wall,” said Elizabeth Pancotti, a policy researcher who co-wrote a recent report on the benefits cliff. “Not that there’s a good time for all these programs to end, but maybe all on the same day wasn’t a great idea.”