Home » Business » These Traders Got the Jump on the Pandemic 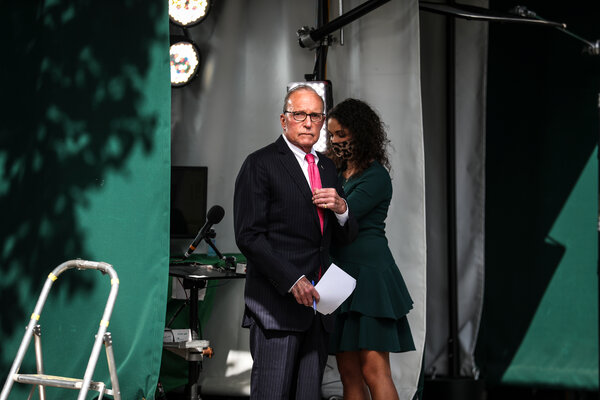 Want this delivered to your inbox each day? Sign up here.

In late February, the Trump administration was publicly playing down the severity of the worsening coronavirus epidemic. But in private, White House officials had a different story — and that information was shared with top traders who made fortuitous bets against the market.

Trump advisers conceded concerns about the coronavirus in private meetings with board members of the conservative Hoover Institution on Feb. 24, Kate Kelly and Mark Mazzetti of The Times report. Larry Kudlow, the White House’s chief economic adviser, told the group that the virus was “contained in the U.S., to date, but now we just don’t know,” hours after saying on CNBC that containment efforts were “pretty close to airtight.”

Here’s how the information then spread:

• William Callanan, a Hoover board member and hedge fund consultant, wrote a memo, noting that nearly every federal official had raised the coronavirus “as a point of concern, totally unprovoked.”

• He then described the briefings in an email to the hedge fund magnate David Tepper of Appaloosa Management. The email circulated among the firm’s employees. Mr. Callanan also tipped at least one financier client.

• The information was passed to at least two outside investors, who in turn shared some details with others. Within 24 hours, at least seven investors at four money managers had been tipped off to some version of Mr. Callanan’s debrief.

By Feb. 26, traders acted on the information, as markets tumbled. Some investors, believing everyday life was about to be upended, bet big against the market — “short everything” was one trader’s reaction — while others stocked up on household staples. Stocks started to slip that afternoon and dropped precipitously the next day. The S&P 500 fell more than 11 percent that week.

• Mr. Callanan said that his email to Appaloosa was based on “extensive research and publicly available information,” and that a copy of the briefing provided to The Times was “materially different” from his original write-up.

• Mr. Tepper had been publicly warning about the coronavirus since early February. He initially denied receiving Mr. Callanan’s email, but later acknowledged it.

• Mr. Kudlow told The Times that he believed his private and public remarks were consistent.

The takeaway: The circulation of the briefing, Kate and Mark write, shows “how elite traders had access to information from the administration that helped them gain financial advantage” when global markets were teetering.