A deep freeze in February left Texas with billions of dollars in damage from cascading power failures that stranded residents in their dark and flooded homes. And insurance companies are hoping they can pass the bill on — just as they did when wildfires engulfed California.

Two months after the storm crippled large swaths of Texas, insurers are sketching out a legal strategy to pin the costs on utilities and power companies that they say failed to adequately prepare for bitterly cold weather.

“The insurance industry is looking very carefully into the question of how the Texas power grid works and what went wrong with it,” said Rhonda D. Orin, an insurance recovery attorney at the law firm Anderson Kill.

The strategy echoes an approach that worked after the devastating California wildfires of 2017 and 2018, when equipment owned by Pacific Gas & Electric sparked blazes that wiped out entire communities. At stake could be more than $10 billion in insured losses for insurers and their business partners, as well as almost-certain premium increases for property owners if the insurers have to pay for the damage themselves.

But the insurers face longer odds in Texas: Decades of deregulation have made the state’s power grid a dizzying web of companies that could make determining fault tricky. Insurers will also have to show that the damage was the result of “gross negligence” — a higher bar than in California.

The insurers say the power companies and utilities failed to prepare for a major winter storm, even though past cold snaps and climate-change data had made the danger clear. In 1989 and 2011, wintry weather caused so much damage that state and federal regulators spent months investigating the causes and issued detailed recommendations for hardening the electrical system against storms.

“They knew in 1989 and even earlier that their systems weren’t winterized, and it doesn’t look like anybody did anything,” said Lawrence T. Bowman, a lawyer in Dallas who represents insurers in liability disputes. Electric utilities in Texas operate as de facto monopolies and were required to use “reasonable diligence” to ensure a consistent supply of power, he said.

“That’s the essence of the claim, that these participants had market power and failed to exercise it in a way to meet their mandate,” Mr. Bowman said.

Although it will be months before the insurers process all their policyholders’ claims, Mr. Bowman is already gearing up for the court battle. Once the claims come in, insurers have as little as 30 days to notify the power companies of their intentions, and Mr. Bowman said he had already sent about a hundred such letters to power companies. He declined to name the insurers he is representing.

None of the big property insurers that recovered money from PG&E — State Farm, Allstate, the Hartford and Travelers — were willing to comment on possible claims against power providers in Texas. But Camille Garcia, a spokeswoman for the Insurance Council of Texas, an industry group, said the “massive property losses are largely the fault of the energy companies.” If the insurers manage to recover money from them, she said, “our customers will benefit, by potentially recovering part or all of their deductible.”

But determining responsibility for damage will be far harder than in California, where the fault for a particular fire could be traced to a single big utility. 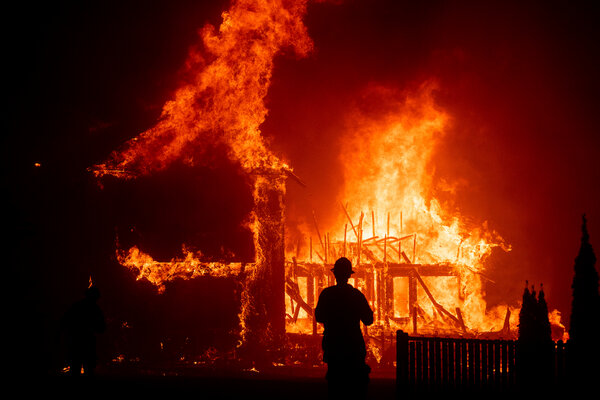 In Texas, there are dozens of smaller companies — some of which have gone bankrupt since the storm — that interact with one another in myriad ways. The supply chain starts where natural gas is extracted from the ground and continues through pipeline operators, generating stations, electric-transmission utilities, pass-through entities and others. Outages at some power plants stopped the pumps that move natural gas through pipelines to other plants, causing them to go down as well.

Kerri Dunn, a spokeswoman for Oncor, the power company with the largest market share in Texas, declined to comment on possible claims by property insurers. But she said the fault for the cascade of power failures didn’t necessarily belong to utilities. Oncor and others handle only the transmission and distribution of electricity, relying on other companies to generate power, bill customers and perform other tasks.

Other major players in the Texas energy market — CenterPoint, the utility that serves Houston, and the power-plant owners Luminant and Entergy Texas — did not respond to messages seeking comment.

But even that might not be the biggest hurdle to replicating the wildfire strategy: California has much lower liability standards — and that was before the highest court in Texas issued a ruling that could stymie any attempts to go after the organization that operates most of the state’s grid.

In California, insurers were able to point to a state law, since amended, that held power utilities liable for the fires their equipment started, even without a finding of negligence. In Texas, the law requires a showing of gross negligence. And last month, the biggest target of consumer blame — the Electric Reliability Council of Texas, or ERCOT — was effectively granted sovereign immunity by the Texas Supreme Court. The ruling, in an unrelated case, left standing a state appellate decision that ERCOT is “a quasi-governmental regulator, performing an essential public service” and therefore can’t be sued.

ERCOT’s liability insurer isn’t taking any chances, though. Last week, the Cincinnati Insurance Company filed a lawsuit in federal court in Texas seeking a ruling that it has no duty to provide a legal defense for ERCOT, or to make it whole for the sums it would have to pay for property damage or injuries. ERCOT bought a liability-insurance policy from Cincinnati, but the insurer said that the coverage applied only to damage caused by accidents, and that the harm from February’s power outages was “foreseeable, expected and/or intended.”

Estimates of the damage from the storm vary greatly, but none are small. Karen Clark & Company, which models catastrophe losses, has predicted that insured losses from the storm will reach $18 billion, spread over 20 states. But the firm says more than half the losses were in Texas, which years ago isolated itself from neighboring grids, making it impossible for unaffected providers to pick up the slack.

The damage was so extensive that freelance adjusters had to be flown in from other states just to handle all the claims.

“Some families couldn’t get hold of their insurance companies for weeks,” said Tom Formeller, a stucco and exterior-painting contractor in Houston who reinvented himself as an emergency plumber after the storm.

In normal times, he said, families would have paid him upfront for the repairs, then waited for their insurance checks. But with unemployment high from the pandemic, some families didn’t have the cash, so Mr. Formeller capped their pipes for free and told them to pay when they could.

“I had one 78-year-old woman, by herself, who’d been going without water for nine days,” he said. The woman told Mr. Formeller that she would get a loan to pay him, but he sorted out the delay with her insurer and completed $13,000 in repairs.

Even if the power suppliers are forced to pick up the costs of damage from the winter storm, it’s not clear what — if any — steps they might take to prepare for the next one. In a recent survey of Texans by the University of Houston, about half rejected the notion of winter-proofing the grid if it meant they would pay more for power.

Shares of TuSimple, a developer of autonomous trucks, fall sharply after I.P.O.