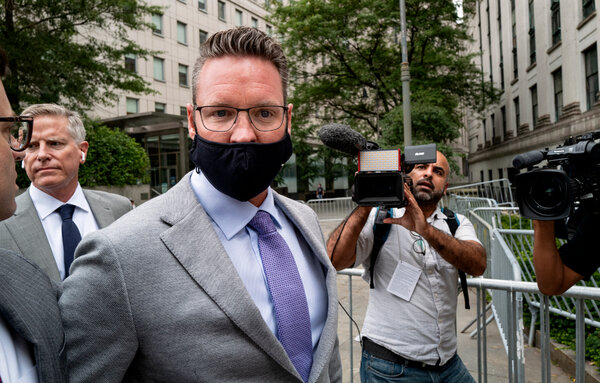 SPACs and fraud: A bug or a feature?

Trevor Milton, the founder of Nikola, is one of the most high-profile figures at the center of the boom in SPAC deals. Yesterday he was hit with criminal and civil charges by the U.S. attorney’s office in Manhattan and the S.E.C. The prosecutors accuse Milton of misleading investors about the technology for the company’s battery- and hydrogen-powered vehicles. Nikola went public in June last year by merging with a blank-check firm, VectorIQ, founded by a former G.M. executive.

“In carrying out his fraudulent scheme, Milton exploited features of the SPAC structure,” said Audrey Strauss, the U.S. attorney in Manhattan. Does that put SPACs on trial too?

The charges aren’t all about SPACs. In one example detailed in the S.E.C.’s suit, Milton promoted a video on social media of the company’s Nikola One truck “while omitting the fact that the truck was rolling down an incline due to gravity rather than under its own power.” That seems more like a Milton thing than a SPAC thing.

“SPACs are clearly problematic, in that they fail to disclose their economics very well,” said the Stanford professor Michael Klausner, “but there’s not been a lot of old-fashioned fraud.” Milton’s case is “pretty extraordinary,” he added. Milton pleaded not guilty and his legal team said he had been wrongfully accused. He was released on a $100 million bond.

The charges do call into question SPACs’ key selling points. Direct negotiations with a small set of investors in a SPAC make for a more thorough understanding of companies, as compared to the traditional I.P.O. roadshow, proponents argue. But the incentives to consummate deals — SPACs have a two-year time limit to spend their cash — may lead some to miss red flags. Nikola’s SPAC deal included extra funds from Fidelity and ValueAct Spring Fund (the firm’s Jeffrey Ubben is a Nikola board member), featured top bankers and lawyers advising on the deal, and led to a partnership with G.M. to work together on trucks.

Supporters also say that SPAC mergers allow retail investors to get exposure to young, innovative companies earlier than the more staid I.P.O. process. But Milton’s “relentless public relations blitz” targeting a group he called “Robinhood investors” was a factor in the fraud, the S.E.C. said.

So, what went wrong? During last year’s SPAC frenzy, were overworked dealmakers moving too fast to catch problems at Nikola? Notably, Milton is the only person charged. Nikola said in a statement that he has not been involved with the company since resigning in September.

Even if the accusations against Milton are “as egregious as it gets,” said Josh DuClos, who helps lead the SPAC group at the law firm Sidley Austin, prosecutors aren’t “going to limit themselves to those types of things” as they step up scrutiny of other SPAC deals.

Federal prosecutors and securities regulators are investigating the credibility of preorder claims at Lordstown Motors, an electric truckmaker that went public via SPAC last year. The S.E.C. recently settled a civil suit with several parties involved in the merger of space technology company Momentus with a SPAC, saying that sponsors being lied to about a company’s true prospects did not absolve them of a “failure to undertake adequate due diligence.”

More vaccine mandates and return-to-office delays. President Biden confirmed new requirements for federal workers to be vaccinated, and the Pentagon imposed the same rules on the military. In the corporate world, Danny Meyer’s Union Square Hospitality Group will require employees and customers dining indoors at its restaurants to be vaccinated, and Uber announced a vaccine mandate for employees and pushed its office reopening to October.

Amazon rounds out a triumphant tech earnings season. The e-commerce giant made a $7.8 billion profit in its latest quarter, nearly 50 percent higher than a year ago. Although there were signs that people aren’t shopping online quite as much as before, Amazon’s other business lines, like cloud computing, show no signs of slowing.

The U.S. economy returns to prepandemic levels. G.D.P. climbed out of its pandemic-induced hole in the second quarter, driven by consumer spending. But economists expected even stronger growth, and the spread of the Delta variant of the coronavirus could derail the recovery.

Scarlett Johansson sues Disney. The “Black Widow” star said that making the movie available on Disney+ at the same time it debuted in theaters cost her tens of millions of dollars. Her compensation, like that of most actors, relies heavily on bonuses tied to ticket sales.

MacKenzie Scott and Melinda French Gates team up. The billionaire philanthropists will together donate $40 million over the next decade to winners of a competition that looks for creative ways to empower women in the U.S., hosted by French Gates’s investment firm Pivotal Ventures.

Shares of Robinhood fell 8 percent on their first day of trading. That valued the trading app at a hefty $29 billion, making its founders and early investors very rich. Still, Robinhood’s somewhat muted entry into the public markets felt like a step back for a firm whose sweeping goal is to democratize Wall Street.

Some of the lessons learned:

Rewriting the rules is hard. Robinhood demanded that at least 20 percent of its offering was sold to retail investors, a far higher share than in most I.P.O.s. Goldman Sachs, which led the offering, and other underwriters usually gauge demand for a listing by talking to big institutional clients. The large share of the I.P.O. going to retail investors may have thrown off their estimates.

Access to an I.P.O. doesn’t necessarily spread wealth. Robinhood’s website says investing in an I.P.O. can be risky, but the graphic the app uses to convey that a customer has received shares in an offering is a rising hot-air balloon that drops boxes, like presents, onto their account balance. Instead of a boost, Robinhood’s clients shared a collective loss worth tens of millions of dollars.

Robinhood might struggle to sell other products. One reason the bulls said Robinhood deserved a huge market value is because it could expand to sell additional financial products to its 20-million-plus users. But the company’s less-than-stellar I.P.O. shows that might not be so easy. Robinhood is popular because it offers commission-free trades and other perks, like access to I.P.O.s (and makes money from behind-the-scenes deals with market makers). If, to justify its valuation, Robinhood has to introduce services that charge fees or interest to users directly, the service may feel less disruptive.

“Female athletes are looking for more because like most women, we’re not just one thing in our lives.”

— Kyle Andrew, Athleta’s chief brand officer, on how a growing number of top female athletes, including Simone Biles, have been striking more expansive sponsorship deals with smaller activewear brands, like Athleta and Lululemon, instead of traditional megasponsors like Nike.

Some of the academic research that caught our eye this week, summarized in one sentence:

Professional investors are more skilled at timing when they buy than when they sell. (Klakow Akepanidtaworn et al)

How to tame the wild world of crypto stablecoins. (Gary Gorton and Jeffrey Zhang)

The White House won a major victory this week when Republican senators helped advance a $1 trillion bipartisan infrastructure deal. For President Biden, it’s a “vindication of his faith in bipartisanship and a repudiation of the slash-and-burn politics of his immediate predecessor,” The Times’s Jim Tankersley writes.

But the road to passing legislation won’t be smooth, as Democrats fight among themselves over an even bigger proposal and former president Donald Trump warns conservatives to resist passing any laws or face political retaliation.

Negotiators found new ways to pay for it. Instead of the original plan to bolster the I.R.S. to collect more taxes, money previously earmarked for pandemic-related aid is being repurposed, like the extra unemployment benefits canceled by two dozen Republican governors. The cryptocurrency industry is up in arms over a clause aimed at raising nearly $30 billion by imposing more tax reporting requirements on transactions.

Democrats also have a $3.5 trillion budget blueprint to pass. It would provide more spending for the administration’s priorities on climate, health care and education, and theoretically wouldn’t need Republican approval if Democrats unite to pass it through a process called reconciliation. But Senator Kyrsten Sinema of Arizona, a centrist Democrat, has said she wants to spend less, drawing ire from Representative Alexandria Ocasio-Cortez of New York and other progressives, who implied their support for the Sinema-led bipartisan infrastructure bill is conditional on the $3.5 trillion budget passing reconciliation. Chuck Schumer, the Senate majority leader, has warned colleagues of long nights and weekends ahead.

Microsoft is reportedly in talks to buy a stake in Oyo, the Indian budget hotel chain backed by SoftBank. (TechCrunch)

Atlas Crest, the Moelis-backed SPAC, cut the valuation of its deal to buy the electric aircraft start-up Archer by $1 billion, to $1.7 billion. (Reuters)

How Europe, after a slow start, overtook the U.S. in Covid vaccinations. (NYT)

China is putting its freewheeling facial-recognition industry on notice. (WaPo)

The poultry processing giant Koch Foods and executives from rival Pilgrim’s Pride were indicted on federal charges of conspiring to fix prices. (NYT)

A barrage of extreme weather has caught many power companies unprepared. (NYT)

Northern California’s winemakers are struggling to adapt to drought, wildfires and erosion. (NYT)

The video game maker Activision has been thrown into an uproar over workplace behavior issues. (NYT)

“How the Head of the N.R.A. and His Wife Secretly Shipped Their Elephant Trophies Home” (New Yorker)

We’d like your feedback. Please email thoughts and suggestions to [email protected]