The boss of carmaker Rolls-Royce has said global demand for luxury vehicles is rebounding despite the pandemic.

Boss Torsten Müller-Ötvös told the BBC that markets in Asia, Europe and the US were now “more or less back to normal”.

Mr Müller-Ötvös was speaking at the launch of the new Rolls-Royce Ghost, the company’s latest model, which is expected to retail at around £250,000.

He said sales for the first half of 2020 were down 30%, but now “times are starting to become better and better”.

Mr Müller-Ötvös described the launch of the new Rolls-Royce Ghost, a complete redesign of the most successful car in the firm’s history, as a “seminal moment”. 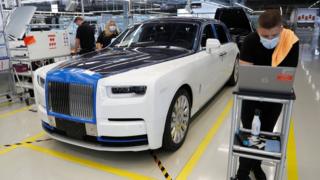 At the height of the coronavirus pandemic, Rolls-Royce shut down production for a couple of weeks, while dealerships around the world followed suit.

The slump in sales came after a bumper year in 2019, which Mr Müller-Ötvös described as “the best-ever year in the 116-year history of Rolls-Royce Motor Cars”.

“But of course, then Covid happened,” he added.

Since then, the firm had seen an “upward trend”, he said. “Business is coming back to what I would call far more normal.”

The Rolls-Royce boss rejected suggestions that the carmaker was overly dependent on one region for its sales, saying it was “well balanced worldwide”.

Although the US was its biggest market and China was important, there was also strong demand in countries such as the UK, which accounted for 10% of its sales, he said.