Home » Business » Post-Election Day, Many Boarded-up Stores in U.S. Are Open for Business, Others Stay Shut

While election boards across the country were tallying mail-in ballots on Wednesday, retailers in major U.S. cities were trying to get back to business.

This week hundreds, if not thousands, of plywood-covered stores can be found throughout the U.S. in Los Angeles; New York; Boston; Chicago; Portland, Ore.; Philadelphia; Washington, D.C., and numerous other cities as they covered their facades in advance of the presidential election for fear of violence and vandalism. Many stores remained closed Wednesday as the U.S. braced for days, if not weeks, of uncertainty surrounding the results of the presidential race between President Trump and former vice president Joe Biden, which remained a cliffhanger as of press time. Even once a winner is declared, expectations are high that a drawn-out court battle will ensue; Trump’s campaign had already filed lawsuits Wednesday in the battleground states of Michigan and Pennsylvania.

Now, after having to shutter their stores earlier this year due to the pandemic and seeing shopper traffic at brick-and-mortar wither to a fraction of normal as consumers remain fearful about the virus, retailers are bracing themselves for a drawn-out election that could impact spending during the key holiday season which, for many stores and consumers, has already begun.

Essentially the whole of Los Angeles retail remained closed and boarded up on Wednesday, despite almost no unrest in the city on an election night that, as expected, saw no winner declared.

In Chicago, a handful of luxury retailers — Vera Wang, Giorgio Armani and Prada among them — were temporarily shuttered Wednesday along Oak Street, a tony shopping throughway, according to Adam Skaf, a spokesman for the Magnificent Mile Association. Stores in the city have faced a few rounds of theft in the past five months. In August, the Chicago Police Department made more than 100 arrests in relation to theft and criminal activity downtown. In addition, a Looting Task Force was established, and Chicago police created a Critical Incident Response team that has been conducting drills in recent weeks.

Having advised retailers to keep property well-lit at night, maintain security cameras and post a contact’s name and number near the door so that police can notify any damage, Philadelphia police officials have not offered any guidelines about temporary closures.

That was also the case with the Minneapolis Police Department, according to a spokesman. Several Target stores were forced to close in Minneapolis and the surrounding area in late May and early June, following the looting that ensued after the police killing of George Floyd. At that time, the estimated amount of insured loss in Minneapolis was $25 million, but that number wound up being significantly higher, according to Tom Johansmeyer, head of Verisk’s Property Claim Services. He declined to specify how much. Much of the recent excessive boarding up of stores was driven by the fact that many retailers did not have adequate insurance policies that covered their losses due to looting.

A Target spokeswoman said, “Outside of one Philadelphia store that was closed last week due to protest activity and looting, there are no stores closed at this time. Target’s top priority is the safety of our team members and guests. We’ll continue to monitor our communities closely and make decisions accordingly.”

In Manhattan, hundreds of stores were still securely boarded up Wednesday from the Upper West Side to SoHo and most neighborhoods in between. Some luxury houses like Prada, Valentino and Bulgari did not just board up their windows, but also the exteriors of their stores. Police helicopters circled overhead downtown Tuesday night for hours, as an audible reminder of New York City Police Department’s increased presence that is in place for election week.

On Wednesday, NYPD officers lined the sidewalks in front of Bergdorf Goodman’s main store on Fifth Avenue and its men’s store across the street. Police barricades, in some cases two rows of them, added another obstacle in front of the stores, and on nearby blocks. A garbage truck was parked in front of the Louis Vuitton store, and several police officers stood near the entrance. Several police vehicles, an NYPD bus and three NYPD trucks were parked one block south in front of the Prada and Bulgari stores — not far from Trump Tower. Without many shoppers or pedestrians on the sidewalks, police officers chatted with each other, occasionally offering directions or waving at a passing toddler.

At the Saks Fifth Avenue flagship, round-the-clock security guards were still stationed in the store with security dogs, a safety measure first put in place last week. The retailer was said to be spending $1,000 an hour for such reinforcement.

Plywood covered Cartier, the NBA store, H&M, Victoria’s Secret and scores of other Fifth Avenue retailers to varying degrees. The stores appeared so locked down that a few left their front doors ajar as an indicator that they were in fact open. Timberland, Zara and Barnes & Noble featured “We’re Open” signs near the entrances. An industrious blue-haired employee at &OtherStories painted “WE ARE OPEN” twice on the boarded-up store. She deferred comment regarding the store’s recent foot traffic to the corporate headquarters. H&M’s 563 stores in the U.S. remain open except for two in El Paso, Tex., due to the guidance of local health and government officials in relation to COVID-19.

All in all, shoppers were scarce Wednesday morning along Fifth Avenue in Midtown and on the Upper West Side. 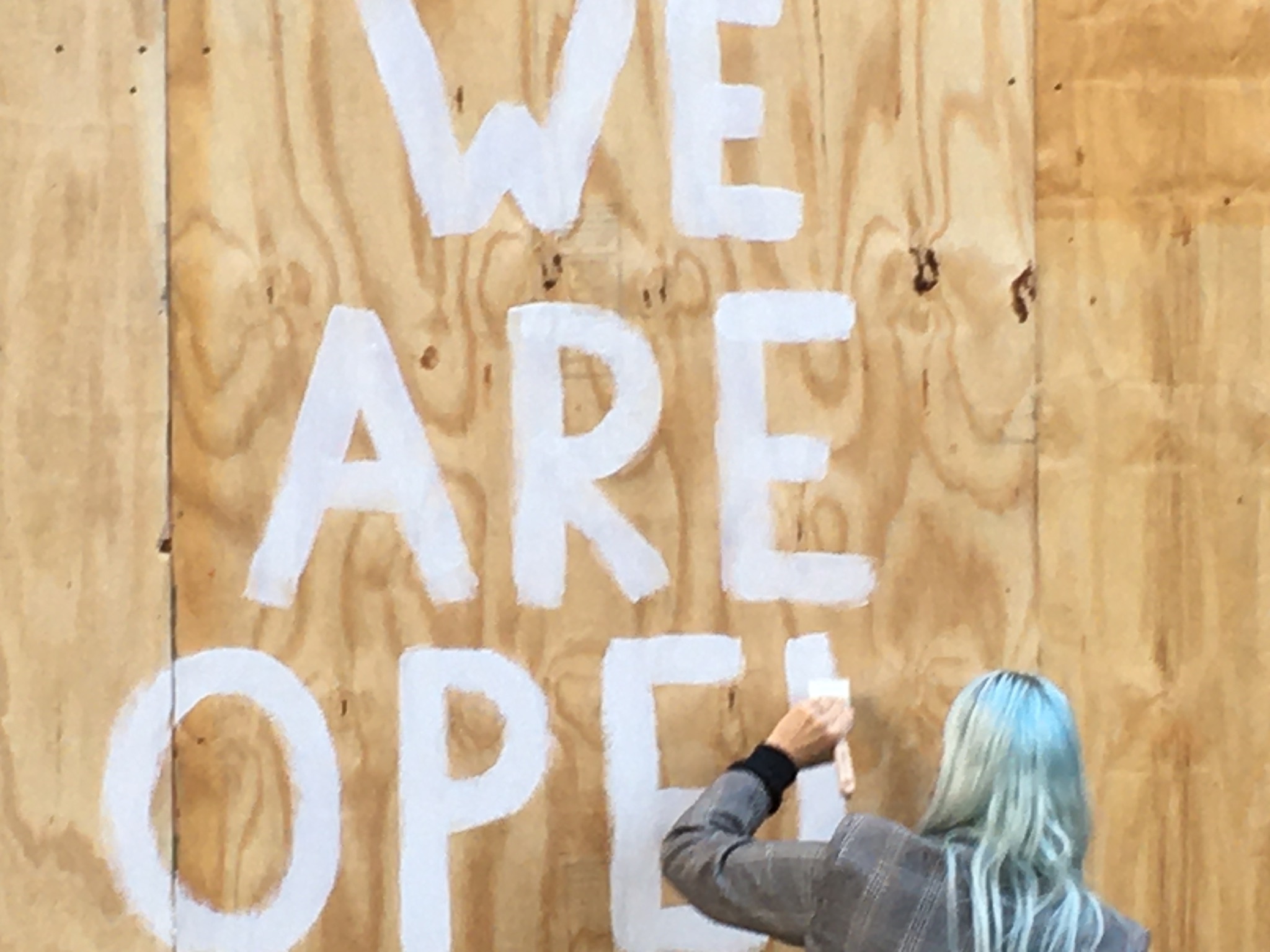 Having declared a state of emergency earlier this week and with the National Guard on reserve, Portland — which in recent months has faced near-nightly protests — saw businesses respond accordingly to safeguard their stores. Pre-Election Day, stores were advised to empty and secure dumpsters and garbage cans, and remove outdoor furniture and signage. As of Wednesday, there were no updates regarding whether retailers should stay open or modify hours, according to a spokesman for Portland Mayor Ted Wheeler. That was also the word from a representative of the Portland Police Bureau.

Reached for comment about any temporary store closings, a Walmart Inc. spokesman addressed the status of another recent precaution taken by the mass chain. After removing firearms and ammunition from some of its stores, Walmart has brought that merchandise back. The company updated that plan last week, according to a company spokesman, who cited a statement issued Oct. 30 that read, “After civil unrest earlier this week resulted in damage to several of our stores, we asked stores to move firearms and ammunition from the sales floor to a secure location in the back of the store in an abundance of caution. As the current incidents have remained geographically isolated, we have made the decision to begin returning these products to the sales floor today.”

After closing its 94 full-priced stores, 241 Nordstrom Rack stores, five Nordstrom Local service hubs and two Last Chance stores early on Election Day — at 5 p.m. local time as planned — Nordstrom reopened all of its locations in the U.S. In certain locations, such as its New York City flagship, the company took the safety precaution of installing frosted windows.

CVS Health, one of the retailers that faced a substantial amount of theft and property damage during the unrest in late May and early June, is closely monitoring the situation in its markets, according to a company spokeswoman. “Our local leaders are empowered to take steps that they determine will best support the safety of our stores, employees and customers. This includes boarding of windows at some stores. Any store with boarded windows will continue to be open to serve customers as long as it is safe to do so,” she said.

All Talbots locations across the country reopened Wednesday, according to a company spokeswoman. However, the 410-unit operation has added security in select markets such as New York City, Boston and Providence, she said.

Gap Inc. declined to specify whether any of its stores have temporarily closed in select cities. A company spokeswoman said, “At Gap Inc., we believe that being inclusive isn’t optional. We all deserve to belong, and on our own terms. This is core to who we are as a company and how we make decisions. In upholding these values, we remain steadfast to our mission of keeping our stores welcoming and safe spaces for all.”

She continued, “As always, our number-one priority is the safety and well-being of our teams, customers and communities. We have contingency plans set in place to manage issues that may arise and will continue to monitor the situation carefully and closely.”

Alessandro Bogliolo on Tiffany’s Path Through the Pandemic