Home » Business » Milan Might Have Its Own Highline Courtesy of Prada Holding, Among Others

MILAN — Since the 2015 Universal Expo, Milan has undergone a major revamp, projecting the city into a future filled with re-qualification projects of former industrial and abandoned venues.

Among them, the strategic Scalo Porta Romana former railway yard covering 20 hectares, or almost 50 acres, is set for a major revamp that will potentially include a highline crossing the area from West to East.

On Wednesday, entities behind the “Porta Romana” fund set up by Prada Holding SpA, which controls the Prada fashion group, with real estate companies Covivio and Coima SGR, which acquired the Scalo Porta Romana for 180 million euros in November, announced the winner of the international competition launched by Gruppo FS Italiane — which controls the Italian state railway company — to select the master plan for the project.

The winning plan called “Parco Romana” was presented by a team of design firms including Outcomist, Diller Scofidio + Renfro, PLP Architecture and Carlo Ratti Associati, among others, which beat the competition of five other architectural teams.

The judging panel gave the thumbs-up to the project for “making the wide green area the focal point of the development, shifting the traditional urbanistic paradigms.”

Joining the cityscape with green areas, the latter covering half the surface of the former railway yard, the project is aimed at blending residential buildings, offices, social and student housing and community services, in addition to accommodations for the Olympic and Paralympic athletes competing in the 2026 Winter Olympic Games to be held in Milan and Cortina d’Ampezzo. After the Games, the village will be reconverted into social housing structures and accommodation for university students.

Supporting the exchange among residents, athletes and visitors, the space — located next to Fondazione Prada — will be connected to the city via public transports while within the area, pedestrian mobility will be favored, making the space car-free.

In hopes of mitigating the impact of the railway plant, which after the restoration will span more than 2.5 hectares, the project also features a highline crossing the area from West to East, in addition to public spaces and squares adjacent to the residential building located at the Northern and Southern end of the area. 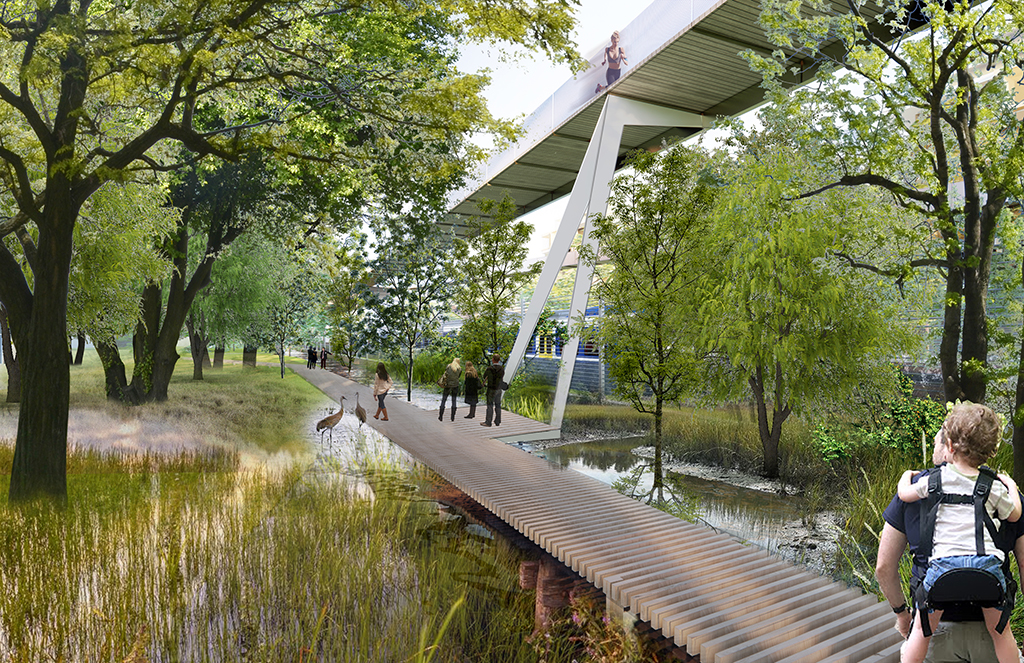 A render of the public park and highline at the Milan’s Scalo Porta Romana former railway yard after its restoration backed by Prada Holding. Courtesy of Porta Romana Fund.

While mainly overseeing the re-qualification of a public park, Prada Holding will establish a building housing laboratories and offices to extend its existing activities in the area, a sign of its influence on the southern part of Milan. For instance, the opening of Fondazione Prada in 2015 paved the way for real estate constructions that revved up the district and drew locals and tourists in what was once known for being an industrial zone.

“Since we decided to restore a former distillery [for the Fondazione Prada venue] to promote new initiatives in a beautiful but disused area of the city, the aspirations of Prada Holding for the Scalo Porta Romana have always been to preserve its past values,” said Carlo Mazzi, chairman of the Prada Group.

“Creativity is the mission of the group and we all know that there’s not innovation without tradition. We have picked this project as it’s able to enhance the green spaces, tearing down the barriers between the northern and southern part of the city while preserving the memory of the railway plant, integrating it with the new buildings that will flank it, giving the sense of a free space turned into a [public] park that nobody can occupy exclusively,” he added. 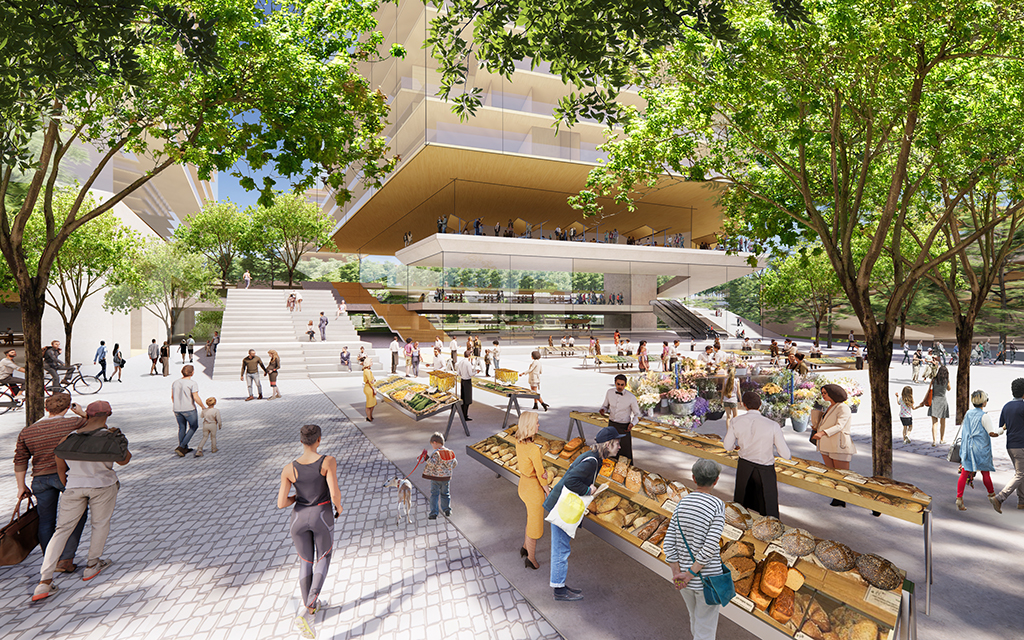 A render of a public space at the Milan’s Scalo Porta Romana former railway yard after its restoration backed by Prada Holding. Courtesy of Porta Romana Fund.

The “Parco Romana” master plan was designed keeping environmental key performance indicators in mind, in compliance with the Paris Agreement, the European Green Deal and the National Plan for Restoration and Resilience drafted by the Italian government according to the U.N.’s sustainable development goals. Among other goals, the project has the ambition to support decarbonization, build a community-centered space enhancing citizens’ wellness, set up a circular approach and enhance biodiversity.

Both Manfredi Catella, founder and chief executive officer of Coima SGR, and Alexei Dal Pastro, CEO Italy of Covivio praised the project for setting the foundation of a new development strategy rooted in innovation and sustainability in sync with Milan’s urbanization goals.

“The ‘renaissance’ of former railway plants is going to be a concrete answer to the city’s needs, to the motions of social equity and environmental commitment that our citizens are asking,” noted Giuseppe Sala, the mayor of Milan. 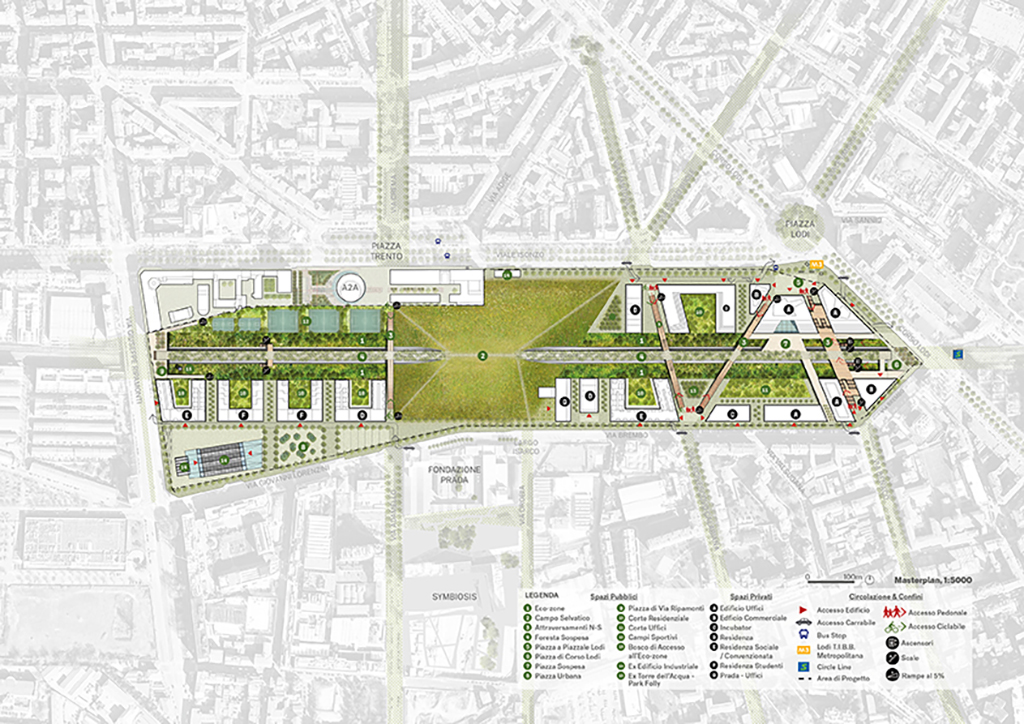 The whole re-qualification initiative is part of an agreement signed in 2017 by the Lombardy region and Milan’s municipality with FS Italiane, which committed to repurpose seven disused railway yards in the city through environmentally friendly and socially useful projects.

The final projects for the Scalo Porta Romana revamping initiative and for the Olympic Village will be presented by the winning team by the end of May and October, respectively.

What Will the 2026 Winter Olympics Mean for Milan and Italy?