A throwback to the reckless glamour of the prerecession mid-Aughts; a talented writer wrestling with a serious prescription pill addiction and childhood trauma; a privileged young woman thumbing her nose at the very industry she had revered her entire life: Former magazine editor and author Cat Marnell, who has emerged into her most recent phase of adulthood with self-awareness, candor and her signature quick wit intact, likely won’t argue these epithets of a previous life.

For those less indoctrinated to media palace intrigue, Marnell quit her role as beauty director of XoJane, Jane Pratt’s erstwhile digital platform where Marnell worked after many years at various Condé Nast glossies, in 2012 in the most dramatic of fashions — she infamously told The New York Post, “I couldn’t spend another summer meeting deadlines behind a computer at night when I could be on the rooftop of Le Bain looking for shooting stars and smoking angel dust with my friends and writing a book, which is what I’m doing next.”

That book, her 2017 memoir “How to Murder Your Life,” went on to become a New York Times bestseller and is being adapted into a limited television series with Sony Tristar. Marnell is a producer.

In 2020, she released a follow-up Audible audiobook titled “Self-Tanner for the Soul: How I Ran Away to Europe and Found My Inner Glow (When Life Got Dark),” which recounts her nearly three-and-a-half years of traversing the globe.

Marnell returned to New York at the onset of the pandemic and began plotting her next move professionally. While she is optimistic about a second book concept she’s working on, she felt that joining Patreon, a publishing platform designed for content creators to monetize their work through direct reader subscriptions, made the most sense for her. She launched her column BeautyShambles in November.

Tech companies like Patreon and Substack are helping artists and writers bypass the traditional middlemen of the publishing industry. Creators upload their content directly to the publishing platforms and it’s then pushed out to their paid subscribers through email and on the respective apps.

For Patreon, members can choose which tier they want to pay for (additional exclusive content is typically available at higher tiers, which cost more money), and there are multimedia offerings like podcasts available as well. If done correctly, these subscription models can negate the need for traditional ad sales, historically the backbone of editorial content monetization. Marnell charges $5 per month for all her content, $6 per month if users also want to receive patron-only Q&As and $17 per month to receive a monthly phone call from Marnell on top of that.

She publishes weekly articles like “Swagosian Paris Saturday: A Home Decor Post,” “Havanashambles Part Two/The Most Mysterious Bitch in Cuba” and “A Romantic Walk to the Liquor Store.” These very personal musings on travel, beauty, art and adulthood have a dream state quality, but are also rooted firmly in the writer’s own experiences. While she, like many writers, was uneasy with the idea of asking readers for direct payment, part of her evolution has been about recognizing her worth.

“I do have really good taste. My brain is cool and different. And I’m not saying that in an egotistical way, I’m saying that because I’m a talented editor. And I put in a lot of work to find the stuff that I’m going to be showing people in these columns.”

In an interview with WWD, the former beauty editor talks about disrupting the industry she grew up in, the future of the landscape and the opportunities available to the next crop of writers.

WWD: You started working in magazines in college. What was your initial path?

Cat Marnell: I was in the [Condé Nast 4 Times Square office] building when I was quite young, and then onward. My first job was an internship at Vanity Fair in the fashion closet, and I was 21. It’s so funny because back then all I wanted was the Condé Nast thing. There was no Hearst Tower, and it was just Condé, Condé, Condé. I was there for peak Condé Nast. And I was also there for 2008, when everything changed. The big financial crisis, and that’s when it became “let’s clamp down on these town cars.”

I revered print. It just came from straight obsession naturally. And if I look back, that’s why I sent you the Beauty Queen magazine from my childhood.

I was writing beauty credits, and I don’t even know if I was reading them in magazines, but I was saying, “This is Max Factor,” etc. I’ve been doing the same thing for so long that what I’m doing now [on BeautyShambles] is just natural. I just loved it, I was obsessed. I’ve always been at my strongest when I had my own little world. I’ve always been in this little world of beauty. 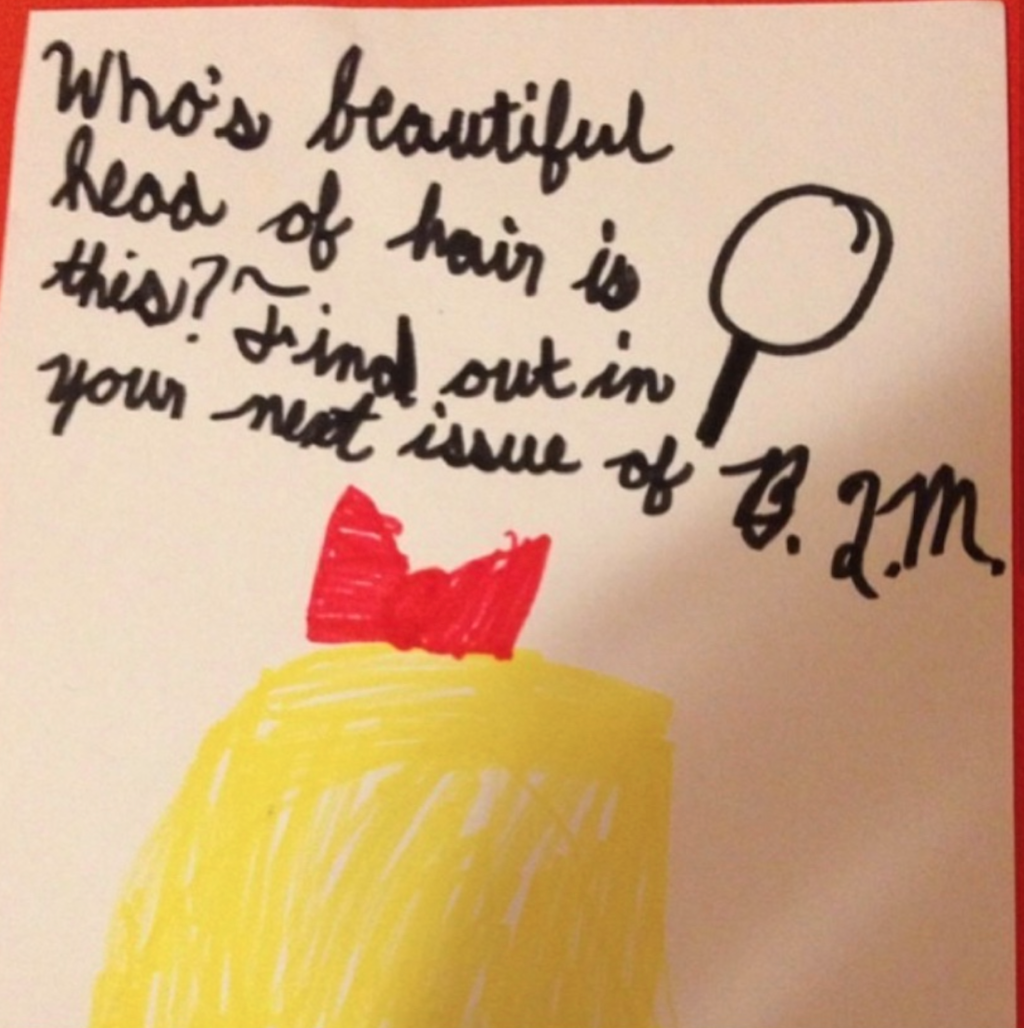 An issue of Beauty Queen magazine, edited by Marnell.

WWD: What initially led you to Patreon?

C.M.: It’s a visual world that I control. I make all those little collages, which I love. It’s like going back to my [Beauty Queen magazine] days. It’s a girl world, and it’s eclectic and different.

I learn from younger people who are doing what they want to do and making money off of it. I love weird stuff. If I can just find a way to be paid for doing that, I do think it will be successful. Because when I keep things pure and do exactly what I want, I have much more success and popularity with that work than someone else’s idea for me.

With Patreon I didn’t even know that it would become this newsletter, I imagined more shorter posts, but of course I just write and write. I can make it about anything. And I get that relief of letting it go — letting the work go after a week, and starting a completely fresh topic.

WWD: What was your initial vision for the column?

C.M.: What I really like about Patreon is that I’m showing people an alternative lifestyle: living on the road, traveling. I’m really deliberate with how I structure the column. I wanted to open in Paris, but not the glitzy Paris of [Netflix series] “Emily in Paris.” I wanted to make it mine, the Paris that I hang out in, which is much less by the River Seine and more by the Canal Saint-Martin, you know.

I wanted to not even show myself doing anything so interesting, which is how I live my life when I’m abroad. I wanted a lot of realism because I do think part of the reason magazines burned out is because there isn’t enough realism.

The next few columns I have coming up I’m doing my last trip that I did in 2020.…I went to the cheapest ski resort in the world in [the country of] Georgia, which is famous for its horrific chairlift crash. I got attacked by a dog and fell down some stairs. Then this weird month in London. And then after that Malta — horrible — and then Jordan, Cairo, back to Paris and home again.

The past three-and-a-half years of travel were crazy and my brain is just full of stuff, and it’s a delight to get it poured out. I’m leading with my brain right now, and I’m super healthy now that addiction isn’t part of my life.

WWD: You’re your own editor now. What does that creative process look like?

C.M.: Going back to my childhood, making those little magazines, 20 pages long — I wasn’t doing that for anyone. That was just my obsession.

When I was older, in junior high, it was the teenybopper magazines, like Big Bop. I hoarded them and wallpapered my room. Back at Condé Nast, I used to go to the Condé library and go through all of those magazines. I played magazine the way people play house.

When I was an intern I would take the [page layout proofs] and pretend to be editing them on the train like a real editor. So that’s what I’m doing here, and every week I’m excited for the fresh idea.

WWD: With Patreon, your readers are paying you directly. In the past, you’ve had challenges with accountability. How do you make the financial side work?

C.M.: I would not probably obsess as much as I do if I was publishing publicly. It’s different when the person is paying you. When the readers are paying, you have to come through. You’re really just obliged to.

I look at the old me the way everyone else does. I’m so different from that person. I just wasn’t present and it was such a crazy time. There’s really [no drugs now].

I protect my peace. I protect my health and focus. Financial health is such a big part of that. Not letting irresponsibility and chaos be part of my life. I would like to prosper, to attract more money. I’m really grateful. I have a lot of perspective, especially from traveling the world.

This is my business. I work so hard. I have the highest standards. I self-edit. And I believe that any money I get, I’m worth it.

WWD: How do you feel about disrupting this industry that you’ve admired for so long?

C.M.: I think in terms of writers, I’m at the front for Patreon — not for Substack. I am encouraging people all the time to go to Patreon (although not as opposed to Substack). I just say, it changed my life, it empowered me. I like Patreon, it’s much more visual. Because I have my magazine background, I like the images. Patreon, the term comes from patron of the arts, so it is more for the pictures. That’s why I didn’t do Substack.

I had someone say, “Well, I don’t want people to say that I’m doing it because you did it.” No, it’s just the platform. It’s access. It has nothing to do with Cat Marnell, quote unquote, going to Patreon first. You should do it now. I want more people to do it. It’s cool. I would like it to be more the standard.

I know I offer really high-quality content. I’m trying to do something really different. I never, ever would have charged people money. I was uncomfortable with it. I don’t like any of that. I don’t pay for the paywall of The New York Times. But it just makes sense for me.

More money poured into stocks in past five months than over last 12 years: BofA