House prices continued their post-lockdown recovery in August, notching up their highest monthly rise in more than 16 years, says the Nationwide.

“House prices have now reversed the losses recorded in May and June and are at a new all-time high,” said its chief economist, Robert Gardner.

However, forecasters expect a drop in prices again when the economic impact of the virus is felt on jobs.

This is likely to coincide with the easing of pent-up demand from lockdown, which is part of the reason for the latest rise in prices.

The Nationwide said the recovery in housing market activity had been “unexpectedly rapid”.

It said the increase in August was the highest since February 2004, when house prices rose by 2.7%. As a result, annual house price growth accelerated to 3.7%, from 1.5% in July.

Rival mortgage lender, the Halifax, had already suggested a similar rise in prices over the summer. 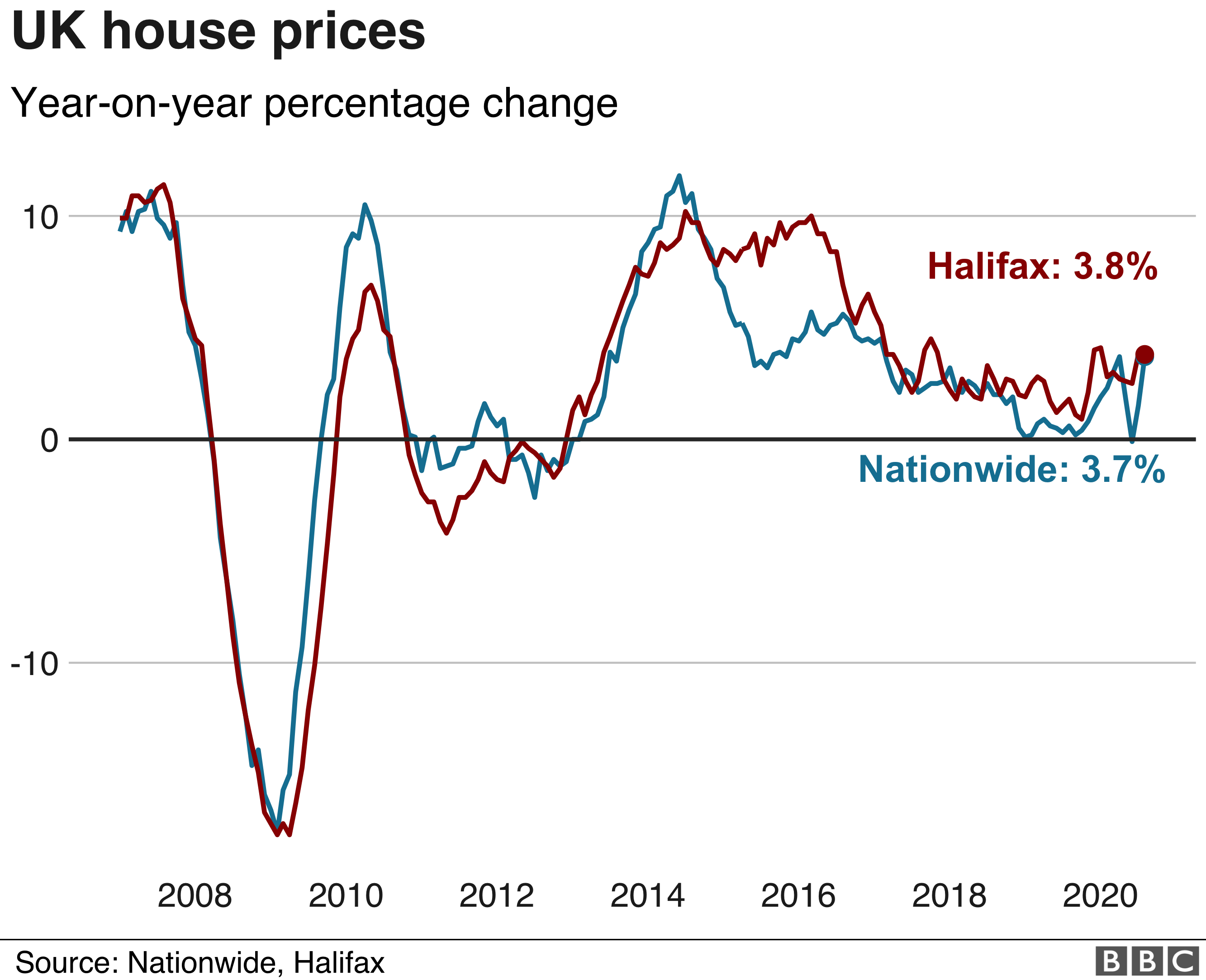 The recent increase in prices has been the result of a range of factors, including demand carried over from lockdown or brought forward owing to the temporary suspension of stamp duty for some homes in England and Northern Ireland. In addition, the number of sales is still comparatively low, making prices more volatile.

First-time buyers will not welcome any rise in prices, and many will struggle with securing a mortgage as lenders tighten their criteria for offering a loan.

Anyone unable to offer a relatively large deposit and whose job is a risk amid the economic effects of the virus is likely to find it harder to get a home loan than before the outbreak.

“This rebound reflects a number of factors. Pent-up demand is coming through, where decisions taken to move before lockdown are progressing,” said Mr Gardner.

He added that “behavioural shifts” could be boosting activity, with people reassessing their housing needs after life in lockdown.

“These trends look set to continue in the near term, further boosted by the recently announced stamp duty holiday, which will serve to bring some activity forward.

“However, most forecasters expect labour market conditions to weaken significantly in the quarters ahead as a result of the after-effects of the pandemic and as government support schemes wind down.

“If this comes to pass, it would likely dampen housing activity once again in the quarters ahead.”

The Resolution Foundation think tank has warned that these predicted price falls could lead to some existing owners becoming trapped by negative equity – when the property is worth less than the mortgage secured on it.

Market commentators said the short-term boom in the market had been surprising, but many do not expect it to last.

Lucy Pendleton, director of estate agents James Pendleton, said: “Buyers emboldened by the stamp duty holiday have been engaged in a pitched battle for property, delivering a barnstorming recovery for the market.

“A stunning proportion of properties are now going for asking price or more, and offers are flooding in. It’s like lockdown was a bad dream.”

But Andrew Montlake, managing director of mortgage broker Coreco, said: “Two words: reality check. As strong as the property market is right now, it will not last.

“Demand is understandably strong after lockdown and the added bonus of the stamp duty holiday, but unemployment is rising by the day and the economic outlook is highly uncertain as the furlough scheme ends.

“In the final months of the year we will start to see a reversal in the current rate of house price growth.”

The figures were published as the UK’s biggest housebuilder, Barratt, said its pre-tax profit fell 46% to £491.8m in the year to the end of June.

It completed 5,252 fewer homes than the previous year, a drop of 29%, as building sites were forced to close for weeks during the pandemic. However, it said forward sales were more positive.

Fed says beating pandemic is key, but how will it know things are better?