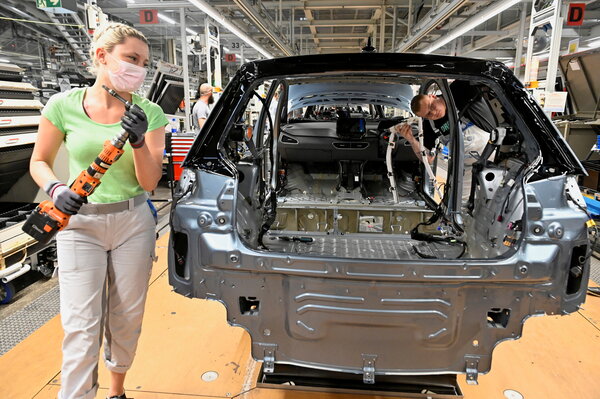 Europe’s economy exited a painful double-dip recession in the second quarter, rebounding faster than expected from the ravages of the coronavirus as consumers spent pent-up savings and restaurants, factories and other businesses sprang to life after pandemic control restrictions eased.

Gross domestic product, the broadest measure of economic output, grew 2 percent in the second quarter of the year in the eurozone, up nearly 14 percent from a year ago and reversing a 0.3 percent contraction in the first three months of the year, reported Eurostat, Europe’s statistics agency, on Friday.

But the euro area’s recovery, while striking for its speed, is far from complete: It continues to lag the United States. While the American economy returned to prepandemic level in the second quarter, Europe is not expected to hit that marker before the end of the year.

Service and manufacturing sentiment and activity jumped as governments worked to prevent new lockdowns in spring and plied pressure on citizens to ramp up vaccinations that are seen as the key to sustaining a recovery and winding down billions in pandemic support for workers and businesses. The vaccination push has reaped benefits: This week the European Union pulled ahead of the United States in total vaccinations, adjusted for population, a turnaround from the spring.

Order books for industrial goods have filled rapidly since the reopenings — so much that some European manufacturers have begun to express worry about keeping up with demand.

“Never before has sentiment been so positive among eurozone businesses and consumers,” Bert Colijn, senior eurozone economist at ING Bank, said in a note to clients. “This indicates that the economic rebound is in full swing.”

In a reflection of the return of animal spirits, many of Europe’s biggest companies reported bumper earnings this week, from a surge in aircraft delivery at Airbus, the world’s largest plane maker, to a consumer splurge in the purchases of expensive scarves and handbags at the luxury retailer Hermes.

The revival has helped stoke a mild return of inflation, which rose to 2.2 percent in July following a 1.9 percent gain the previous month.

But the Delta variant has recently caused consumer confidence to tick back down, while uncertainty has begun to spread among service sector businesses after new cases of the virus arise.

Tesla is calling some workers back to California factory: Bloomberg News