Chevron, the American oil giant, wrapped up the acquisition on Monday of a relatively small Houston-based company called Noble Energy, paying about $4 billion.

Until recently, the deal would have been unlikely, if not unthinkable — because what distinguishes Noble is the large natural gas business it has built in the eastern Mediterranean Sea, especially in Israel, an area that major oil companies had until now avoided.

Chevron’s move is the latest milestone in a remarkable shift in perceptions about a relatively new region for the petroleum industry in the eastern Mediterranean. Once a dead sea for the oil industry, this area, reaching from the Nile Delta in Egypt up to Israel and Lebanon and around Cyprus, has come alive with exploration vessels, drilling rigs and production platforms in recent years thanks to a series of large natural gas discoveries.

Those finds are drawing major oil companies into the area, attracted not only by the prospect of further undiscovered resources but by improving relations between Israel and its former foes Egypt and Jordan.

“This is an area that looks as if it could have the resource quality and the scale to become a pretty significant energy province,” said Mike Wirth, Chevron’s chief executive, in an interview.

International oil giants previously steered clear of Israel, partly, it has been assumed, to avoid alienating large Arab oil producers like Saudi Arabia. The move by Chevron, which this week edged ahead of Exxon Mobil to become America’s largest oil company by market value, indicates that the days when Persian Gulf states bristle about business with Israel may be over. Recently, the United Arab Emirates and Bahrain established relations with Israel with apparent Saudi blessing. 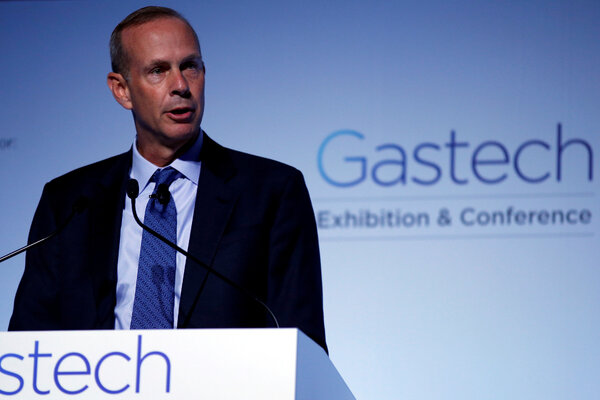 “It is opening up the Israeli market to the world,” Nati Birenboim, a former Israeli energy official who is now a consultant, said of Chevron’s arrival. “Everyone knows when they bought Noble, they bought Israel.”

There are no guarantees that recent progress on energy and other fronts won’t face setbacks. Longstanding differences between Israel and its neighbors are not forgotten; expansionist moves by Turkey and its president, Recep Tayyip Erdogan, to claim some of the underwater riches have alarmed its NATO allies and recently prompted the United States to deploy a massive Navy ship at a base it shares with Greece.

More than 20 years ago, Noble helped put the region on the energy industry’s map. Delek Drilling, an Israeli firm, brought the company to Israel to hunt for petroleum. The partnership, which began in 1999, has produced major natural gas finds that not only reduced Israel’s dependence on imported coal and oil but turned Israel — with some helpful nudging from American diplomats — into an exporter with long-term contracts worth an estimated $25 billion to help power the neighboring economies of Jordan and Egypt.

“I think what Chevron sees is the opportunity” to buy into “massive natural gas resources located in the center of a region with a lot of demand,” said Yossi Abu, Delek’s chief executive and now Chevron’s partner, in an interview.

Along with the drilling sites off the coast of Israel, a major discovery called the Zohr gas field, found by the Italian energy company Eni in Egyptian waters in 2015, has drawn development in the area. Total, the French oil firm, and Eni have even extended the hunt into the sea off strife-torn Lebanon — although the first well the partners drilled, this year, turned out to be a dry hole.

From a geological point of view, the eastern Mediterranean has what oil giants like Chevron are looking for: very large volumes of gas, which many in the industry view as likely to have a better future than oil as climate change concerns grow.

“It is a very attractive region,” said Wayne Ackerman, a former executive at Royal Dutch Shell and an adviser on gas to Saudi Aramco, who has studied the area’s geology. “I am convinced there will be more discoveries there,” added Mr. Ackerman, who now heads gas research at Rapidan Energy Group, a consulting firm.

The energy business has been shaken by plummeting demand during the coronavirus pandemic and worries about the viability of fossil fuels. But the resources that these big fields hold are unlikely to be left in the ground, because they are already earning substantial revenues by powering the economies of Israel and its neighbors. Some of the fields in the region, including the largest Israeli field, in which Chevron now holds a nearly 40 percent stake, could also be expanded relatively cheaply for exports.

“Gas is an important part of any future energy transition scenario,” Mr. Wirth said. “Proximity to growing markets with demand is a real advantage for a gas resource.”

What Chevron is buying in Noble — very cheaply, because Noble’s shares had been pummeled by the pandemic and worries about the company’s high debt and the industry’s future — is a combination of a profitable regional gas business and the opportunity to expand to serve markets farther afield. Noble also has substantial shale-drilling properties in the United States and some production in Equatorial Guinea in central West Africa.

Mr. Abu of Delek said he thought the American company would bring the capital, technology and marketing clout to allow further expansion of the gas fields as well as new exploration. Delek and Noble, along with Royal Dutch Shell, also share a large find off Cyprus, called Aphrodite, that they have so far not succeeded in developing.

The riches lurking beneath the region’s waters have brought their share of problems.

Turkey has so far been unable to benefit from the prospecting because the gas fields are in zones claimed by other countries under the U.N. Law of the Sea Convention. It has responded by muscle-flexing: In recent months, Mr. Erdogan has sent vessels to drill in waters around Cyprus, including in territory that the island’s government has already awarded to companies like Eni and Total.

“It’s quite a novel way of applying pressure,” said Robert Morris, an analyst at Wood Mackenzie, an energy research firm.

Tensions rose in August when a Greek warship collided with a Turkish warship that was escorting a survey vessel. Greece called it an accident; Turkey described it as a provocation. France, Greece, Cyprus and Italy later took part in military exercises involving ships and planes off the Cypriot coast.

Turkey is not a signatory to the Law of the Sea, and says its neighbors have divided the waters unfairly.

“Their aim,” Mr. Erdogan said in a recent magazine interview, “was to confine our country — which has the longest shore in the Mediterranean — to coastline where only fishing with a rod is possible.”

Turkey’s actions have slowed exploration work around Cyprus — as has the coronavirus pandemic.

The wider region, though, is likely to continue to attract interest and investment, analysts say.

“There are just a few places in the world where you can get into large gas assets,” said Gerald Kepes, an independent energy consultant who has worked in Egypt. “These are what big companies are made for.”

Despite Turkey’s efforts, the lure of gaining access to relatively cheap energy has pushed former foes like Egypt, Israel and Jordan more toward cooperation than discord.

Mr. Wirth said recent developments suggested that the region was an “area where we can expect to see regional ties improve in the coming years,” a trend likely to promote economic growth and, consequently, demand for gas.

If such trends continue, there is even the possibility of exporting natural gas to countries in the Persian Gulf, like Saudi Arabia, that are rich in oil but poor in gas needed for electric power and industry. There is also a longer-term hope: that gas from the region can help ease Europe’s dependence on energy imports from Russia.

“I think when you’ve got a large, low-cost resource base like this proximate to large economies, we will find ways to move the gas to market in a manner that’s competitive,” Mr. Wirth said on a call with analysts.