William Spriggs, a professor at Howard University, wrote an open letter last year to his fellow economists. Reacting to the police killing of George Floyd in Minneapolis, he began the letter with a question: “Is now a teachable moment for economists?”

Slamming what he saw as attempts to deny racial discrimination, Dr. Spriggs argued that economists should stop looking for a reason other than racism — some “omitted variable” — to account for why African Americans are falling further behind in the economy.

“Hopefully, this moment will cause economists to reflect and rethink how we study racial disparities,” wrote Dr. Spriggs, who is Black. “Trapped in the dominant conversation, far too often African American economists find themselves having to prove that African Americans are equal.”

After a year in which demands for racial justice acquired new resonance, Dr. Spriggs and others are pushing back against a strongly held tenet of economics: that differences in wages largely reflect differences in skill.

While African Americans lag behind whites in educational attainment, that disparity has narrowed substantially over the last 40 years. Still, the wage gap hasn’t budged.

In 2020, the typical full-time Black worker earned about 20 percent less than a typical full-time white worker. And Black men and women are far less likely than whites to have a job. So the median earnings for Black men in 2019 amounted to only 56 cents for every dollar earned by white men. The gap was wider than it was in 1970.

Earnings of Black men, as a percentage of the earnings of white men, are at the same place they were in the 1960s and 1970s. 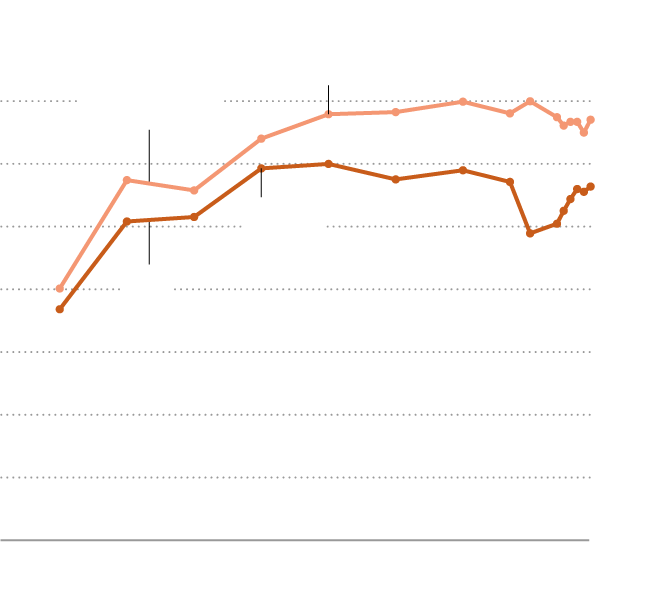 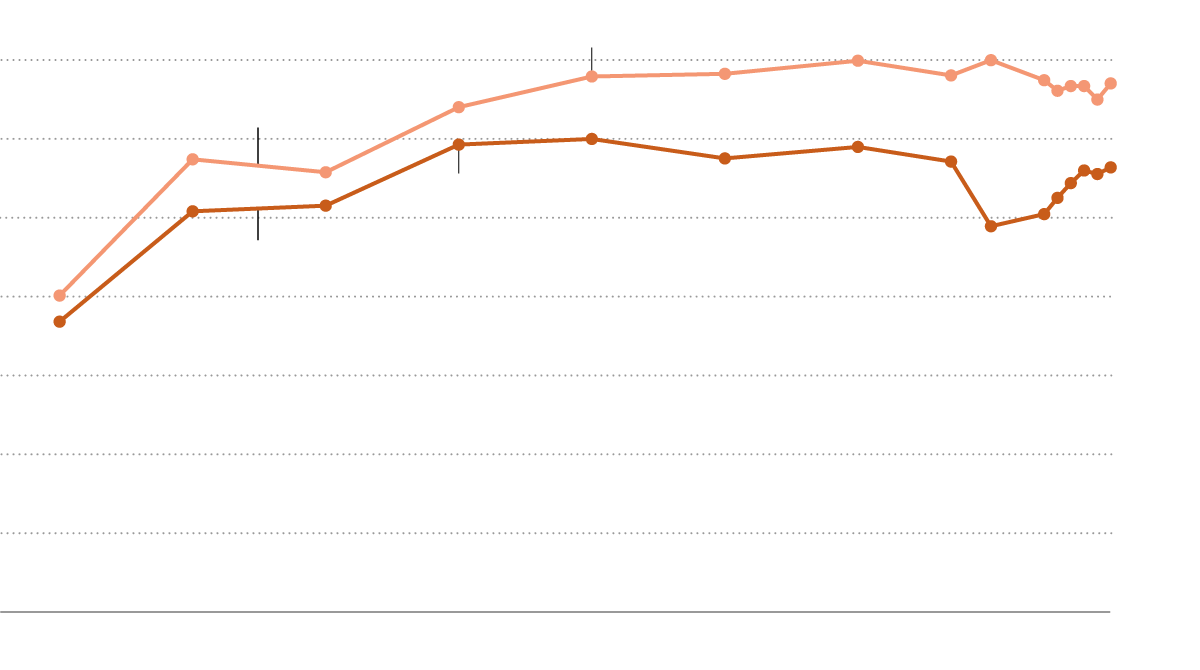 Data are the median earnings of Black men as a percentage of the earnings of white men. The category for all Black and white men includes those who are not working and have no earnings. Earnings are wages, salaries and self-employment income, but not income from other sources.

Black workers also earn lower wages relative to their credentials. An analysis by the Economic Policy Institute, a liberal think tank, found that whether they have a high school diploma or an advanced degree, Black workers make about 80 percent of the earnings of a white worker with similar education.

“I’m not in denial that education matters, but I am pushing back on the extent that it matters,” said Darrick Hamilton, a professor of economics at the New School in New York. “The fact is there are a limited number of jobs and we sort them based on power. Race is a deciding factor.”

Consider information technology, which offers some of the best-paid jobs in the country. African Americans earn around one in 10 bachelor’s degrees in computer science nationwide. By contrast, they account for only 2.6 of every 100 computer workers in the region around San Francisco, including Silicon Valley.

Even with the credentials that many African Americans have in the field, Dr. Spriggs said in an interview, “Silicon Valley says, ‘Yeah, but they are not skilled.’”

But for all the evidence of racial disparities, many economists say employers’ racial biases cannot fully explain what’s going on in the workplace. The idea that discrimination alone has determined Black workers’ lot at work — their employment and their wages — does not mesh with how American society changed over the past half-century.

Simply put, if racism is the reason that Black workers have lagged in pay, said Erik Hurst, a professor of economics at the University of Chicago, how is it that they made such progress after World War II, significantly closing the wage gap with whites while segregation and other explicit barriers were still widespread? And why did this progress stop even though racial animus, by various measures, declined over the years?

Most of the gains made by African Americans in the workplace were made from the 1940s to the 1970s, when racial biases were much more prevalent across society. Then they got stuck.

“There was convergence between Blacks and whites, but then it stopped,” said Dr. Hurst, who is also ​deputy director of the Becker Friedman Institute for Economics, which sponsors a podcast I host. “The question is why.”

Industrial change offers a plausible answer. Consider all the Black workers who flocked from the South in search of well-paid jobs in the car factories, steel smelters, glass and rubber plants of the Northeast and the Midwest. They were hammered by globalization and large-scale automation.

Patrick L. Mason, a professor of economics at Florida State University, noted how the recession and the decline of the defense industry made things so bad in California in the early 1990s that African American families were moving back to Mississippi. “Think how bad the world has to get for people to move back from California to Mississippi,” he said.

Researchers at Purdue University found that the surge of imports from Japan in the 1970s hit Black manufacturing workers particularly intensely even as white manufacturing employment rose. “Losses were concentrated among Black high school dropouts and gains among college-educated whites,” the authors wrote.

What changed, suggests recent research by Dr. Hurst and others, is how the economy values different skills: The rise of the information economy over the last half-century lavished rewards on college-educated workers, especially those most adept at abstract reasoning and problem-solving.

Despite the educational gains by African Americans over the half century, the workers hired for those jobs are still mostly white.

In 1960, 20 percent of Black men had a high school diploma, well below the 50 percent for whites. By 2014, high school completion rates for men of both races were near 90 percent. Over this period, however, the pay for jobs requiring only a high school education stalled.

By 2014, a good wage required a college education. And though the gap has shrunk substantially over the last five decades, 33 percent of white men have at least four years of college, compared with 22 percent of Black men. (The gap between white women and Black women is only slightly less.)

Research on the pay gap by Kerwin Kofi Charles, dean of the Yale School of Management, and Patrick Bayer, a professor of economics at Duke University, concluded that educational gains among Black men were offset in the labor market by “an ever-higher penalty upon the racial differences in education that remained.”

Dr. Hurst, Yona Rubinstein of the London School of Economics and Kazuatsu Shimizu of the University of Chicago recently published research that is largely in line with these findings. It looks at the changing demand for specific skills rather than education as a whole. The scholars identify the kinds of tasks that workers must perform in different jobs, based on descriptions by the Labor Department. For instance, software programmers use a lot of abstract reasoning and analytical ability; waiters and waitresses engage in more social contact; teachers require both.

The evolution of the racial wage gap, they concluded, has been driven both by changes in the tasks performed by Black and white workers, and by the way the economy pays for these tasks.

Their findings support the idea that white Americans’ racial prejudice — while still a daily reality — plays a lesser role than it did half a century ago.

In 1960, jobs that required lots of social contact were largely limited to whites. In many places, a white patron would not be served by a Black waiter or have his hair cut by a Black barber. By 2018, the researchers found, Black men’s jobs involved about the same amount of social contact as those held by white men.

By contrast, Dr. Hurst and his colleagues document very little progress by Black men over this period in taking the types of jobs that rely most heavily on abstract tasks. And these happened to be the jobs on the winning side of technological change.

Jobs heavy in abstract tasks took off around the 1980s, as information technology made inroads across the American economy. So did their wages. Most of the gains went to white workers, because even though African Americans made strides in educational attainment and other measures of skill, whites continue to have an edge.

African Americans account for 7 percent of computer and information system managers, 6.2 percent of software developers and 6.8 percent of lawyers. At the other end of the job market, they represent 22 percent of personal care aides, 31 percent of security guards and 21 percent of couriers and messengers.

“The Black-white skills gap narrowed, and discrimination fell,” Dr. Hurst said. “But gains in the returns to abstract skills advantaged whites relative to Blacks.” These forces roughly canceled each other out.

Dr. Spriggs acknowledges that this interpretation “has a built-in plausibility.” Still, he argues, the role of discrimination by employers is underplayed. “Most desirable jobs go to whites,” he said. “Why don’t you think this is planned?”

The urgent question is how to build a path to equality. Getting the diagnosis right is important. It will determine to what extent the policy response should focus on discrimination in the workplace, education or other barriers holding back African American workers.

The new research places the situation within the broader story of American inequality, which has deepened as the pay of highly educated workers has left the less educated — whether Black or white — far behind. As Kevin Lang, a professor of economics at Boston University, put it, rising inequality across society will increase racial inequality, pretty much regardless of its cause.

But when it comes to the labor market, Dr. Charles of Yale argues that the most promising strategies are not specifically about race. “By far the more important forces that determine wages at the median and below have been race-neutral forces,” he said.

Strengthening unions, whose main job is to push for higher wages, would reduce the racial earnings gap, he suggested. So would raising the minimum wage.

“What would happen if there were a national movement to repair the institutions whose effects are disproportionately felt at the bottom?” Dr. Charles wondered. It might not eliminate America’s racial disparities, he noted. But it could go much of the way.

H&M faces a boycott in China over its statement criticizing treatment of Uyghurs.