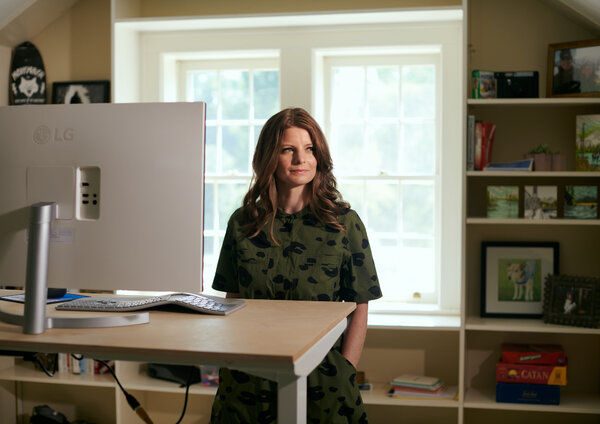 When companies fully reopen their offices, a large number plan to offer employees more flexibility over where they work. A “hybrid office” could make jobs more appealing and help attract and retain diverse candidates. But increasingly, companies are becoming aware of a potential challenge, DealBook’s Sarah Kessler writes for The Times: making sure remote workers don’t get left behind.

In one study that randomly assigned employees at a travel agency to nine months of mostly working at home or mostly working full-time at the office, the at-home staffers were about half as likely as their office counterparts to get a promotion. That was true even though the remote workers were 13 percent more productive, making more calls per minute and taking fewer breaks and sick days.

Monitor promotion and pay data. Paul Wolfe, the head of global human resources at the job site Indeed, said that his company was considering how to monitor its promotion and pay data to ensure remote workers were receiving equal treatment, similar to the way it examines data as part of its diversity and inclusion efforts.

Change work norms. If full-time office work is the norm, remote work is treated like an exception. Some companies are making efforts to upend that status quo. Zillow, for instance, plans to no longer have assigned seats in its offices. At Slack, executives have agreed to work no more than three days in the office each week.

Rethink meetings. ​​Instead of having in-office employees gather in a conference room while remote employees dial in, some companies are encouraging everyone to dial in separately on their laptop, regardless of whether they’re in the office.

Create virtual face time. Prithwiraj Choudhury, a professor at Harvard Business School, ran an experiment at a large global bank last summer to test whether casual, virtual one-on-one meetings could make a difference in whether interns received job offers. He found that when the meetings were with senior managers, it made a big difference. “Informal interactions can be orchestrated even in remote settings,” Dr. Choudhury said, “and they have effects on career outcomes.”

Gov. Andrew Cuomo of New York may face criminal charges in four counties. Prosecutors announced that they were considering cases in connection to sexual harassment allegations. The CNN news anchor Chris Cuomo, the governor’s brother, has come under scrutiny for advising him and avoiding mention of the scandal on air.

All foreign visitors to the U.S. may be required to be fully vaccinated. The Biden administration is developing the plan as part of a system to be implemented after the current restrictions on international travel are lifted. The known global coronavirus caseload surpassed 200 million yesterday.

Senate Democrats want major polluters to pay for climate change. Draft legislation aims to raise $500 billion over a decade to pay for damage caused by extreme weather by taxing big oil and gas companies like Chevron and Exxon. Today, President Biden is expected to tighten tailpipe emissions and sign an executive order calling for half of all vehicles sold in the U.S. to be electric by 2030.

Mexico sues U.S. gun makers in a Massachusetts federal court. It was said to be the first suit by a national government against American weapons manufacturers on their home turf. The complaint argues that 70 percent of the guns in Mexico come from across the border, with many ending up in the hands of drug cartels.

Shares of Robinhood jumped 50 percent yesterday, capping a three-day run that, after a muted market debut last week, has doubled the market value of the popular trading app, to nearly $60 billion. The tool of choice for small investors who drove the meme-stock frenzy appears to have become swept up in the mania itself, with signs that demand from day traders is driving the surge.

Robinhood is still worth less than half of the rival broker Charles Schwab ($130 billion), but twice as much as the exchange operator Nasdaq ($30 billion). Among fintech companies, it falls short of the payments firm Square ($120 billion) but now surpasses the crypto specialist Coinbase ($50 billion). And if you consider Robinhood a meme stock — its rapid rise this week makes a strong case — it is by far the largest, ahead of AMC ($15 billion) and GameStop ($11 billion).

Whatever it is, Robinhood is growing faster than many of its rivals in finance, tech and sectors in between. “In this fourth industrial revolution around 5G, A.I. and electric vehicles, we are seeing new business models emerge,” said the analyst Dan Ives of Wedbush Securities, “with Robinhood a consumer juggernaut.”

“It was a huge mistake to spend time with him, to give him the credibility of being there.”

— Bill Gates on regrets about his relationship with Jeffrey Epstein, in an interview on CNN.

A coalition of gig-economy companies, including DoorDash, Instacart, Lyft and Uber, have filed a ballot initiative in Massachusetts that looks a lot like Proposition 22, a measure that passed last year in California and that classified gig workers as independent contractors. What they hope to achieve depends on whom you ask.

If you ask gig companies, they’re trying to do their workers a solid. As in California, the proposal would create a category of independent contractor who is entitled to minimal benefits, like an $18 minimum wage for time spent transporting passengers and deliveries (but not the time in between) and, in some cases, a health care stipend. That’s more than their workers get now.

If you ask worker advocates, gig companies are trying to avoid their obligations. Massachusetts sued Lyft and Uber last year, accusing them of failing to treat drivers as full employees. The ballot measure would enshrine gig workers as independent contractors in state law, and the resulting benefits would pale in comparison to what companies would be obligated to provide to employees.

Meet the next comptroller?

There are so many federal financial regulators that most people don’t even know they all exist, as a senator told the heads of some of those agencies at a recent hearing. Among them is the Office of the Comptroller of the Currency, or O.C.C., which oversees nationally chartered banks and federal savings associations. The often overlooked agency is navigating a fintech revolution as well as an ideological sea change in the aims of regulation.

The O.C.C. is somewhat rudderless — but perhaps not for long. Michael Hsu has been acting comptroller since May, as two previous candidates for the job fell through. The White House is now vetting Saule Omarova of Cornell University Law School to take over permanently, The Times’s Emily Flitter reports. Omarova was a Treasury Department special adviser for regulatory policy under President George W. Bush and could be nominated in the coming months. In her academic writing, Omarova has highlighted the growing risks of fintech firms’ acting like banks and of banks’ wading into cryptocurrency. That’s probably not what technologists, bankers or blockchain enthusiasts want to hear.

They most likely include Brian Brooks, a crypto industry executive who was acting comptroller from May 2020 to January this year, who encouraged crypto companies to seek national banking charters when he ran the agency (he later joined a crypto exchange). Brooks replaced the former bank executive Joseph Otting, who as comptroller called lenders his “customers.” During their tenures at the O.C.C., both Otting and Brooks exchanged friendly messages with Jamie Dimon of JPMorgan Chase, according to emails obtained by The Times. Omarova, by contrast, is a low-profile banking-law professor expected to be tough on the industry.

Regulation that promotes economic equality is a Democratic priority. To address financial and racial disparities, which have widened during the pandemic, the White House has promised to rein in corporate power by appointing regulators not seen as overly cozy with Wall Street or Silicon Valley. Filling the opening at the O.C.C. is a prime opportunity.

Vici, an investment trust, will become one of the biggest casino owners in Las Vegas after buying 15 properties from MGM in a deal worth $17.2 billion. (CNBC)

DoorDash is reportedly in talks to invest in Gorillas, the European grocery-delivery app. (FT)

The pop star Rihanna is now a billionaire, thanks mainly to her stake in Fenty, the beauty company she founded. (Forbes)

The N.S.A. warned all federal government employees to avoid joining public Wi-Fi networks because of the rising fear of hacking. (NYT)

Several big banks aren’t yet on board with an online portal for small businesses to apply for their pandemic rescue loans to be forgiven. (NYT)

It’s been 50 years since the last real update to the U.S. Constitution. Here’s what legal scholars think needs amending next. (Times Opinion)

HSBC is the latest big bank to raise pay for junior staff, to $100,000 for first-year analysts. (Financial News)

With schools and child care still in limbo because of the pandemic, many parents of young children say they can’t return to workplaces — or even apply for jobs. (NYT)

Elon Musk said that Walter Isaacson, who wrote biographies of Steve Jobs and others, is working on a book about his life. (CNN)

There are signs that all-you-can-eat digital subscriptions are becoming more nuanced. (NYT)

The State Department is investigating the disappearance of a $5,800 bottle of whiskey the Japanese government gave former Secretary of State Mike Pompeo. (NYT)

We’d like your feedback. Please email thoughts and suggestions to [email protected]