Throughout the lengthy era B.B. — Before Bose — the choices for a music-loving car buyer ranged from primitive to over the top.

Fifty years ago, “exotic” might include an FM radio, a technology that promised (and sometimes delivered) an advance over static-fueled AM. Then there was the eight-track tape cartridge; some drivers could actually play an entire album without the delicate tape unraveling in the machine. Another option, the tape cassette, didn’t unravel as often, and almost every record album had its cassette equivalent, but the tape hiss was maddening.

But after Amar Bose, the scientist and M.I.T. professor, faltered in his attempt at add-on speakers, he devised a brilliant “clean sheet” idea: He would engineer and install an entire, customized sound system as the car was being built at the factory. Enter the 1983 Cadillac Seville.

After nearly 40 years, the proprietary Bose approach — incorporating innovations in signal processing, equalization and noise canceling — is still a benchmark in car audio, with the Bose logo stamped in the cabins of 40 automotive brands worldwide. But the challenge has been met lately by factory-installed systems from companies like Harman Kardon, Bowers & Wilkins, Bang & Olufsen, Burmester and even the gold standard of the audiophile high end, McIntosh Labs. Back to that shortly. 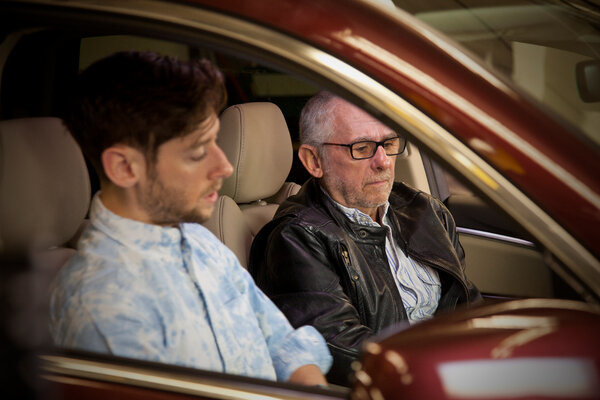 Last month, I had the opportunity to experience a “custom” audio job that happens to move at 80 miles an hour: the 2021 Acura TLX Advance.

For customers used to listening to song libraries on their smartphones through tinny headphones, dropping into the TLX is a revelation of sorts: It sports the 17-speaker ELS Studio 3D, powered by a 710-watt amp, with acoustics designed by Elliot Scheiner, a sound engineer and music producer. He has won eight Grammys; he has produced the Foo Fighters, Sting, Bruce Hornsby, Paul Simon, B.B. King, Van Morrison, Donald Fagen, Queen, Eric Clapton, Jackson Browne, the Eagles and Joe Jackson. And others. Enough said.

Surround sound takes on a new meaning in the TLX, and it’s not just down to the sheer quantity of Panasonic-supplied speakers. (Mr. Scheiner is designing a system for Acura’s coming MDX sport utility vehicle with 25, count ’em, 25 speakers.)

In this sedan, placement is crucial.

For example, putting powerful subwoofers on a car’s rear shelf “has always created a lot of issues with rattles,” said Mark Ziemba, a principal engineer for Panasonic Automotive. “So we thought: Let’s put the speakers in the stanchions by the window frame, where it’s much stronger. Let’s tilt them toward each other, where you’re actually canceling the vibrations.”

He calls this “tilt” the Twin Telford effect, based on designs by the 18th-century Scottish bridge builder Thomas Telford.

Mr. Ziemba also tried another innovation: four thin but highly efficient Highline speakers placed in the headliner, two by the front grab handles and a pair behind the sunroof.

“It adds a lot of naturalness,” he said. “The sound is not blocked, or reflecting off weird surfaces, so it comes through really clearly.”

On a 300-mile road trip in the TLX, I sampled tunes via a list from Tidal over Apple CarPlay (Sirius XM, FM and, yes, even AM are available) plus the music library on my iPhone. Classic Sinatra was appropriately moody. An early live set by the Who was appropriately boisterous and sloppy. Rickie Lee Jones’s evocative “Last Chance Texaco” put Ms. Jones in the cockpit.

But despite the sonic sensations in this $48,000 machine, it’s not the Vienna State Opera. Most of us put our vehicles into motion, and wind noise can disrupt the concert hall illusion. The TLX had 19-inch wheels, and at speed, that contributed a fair amount of tire roar. And with some content, I found the music overly bright; reducing the treble tamed that somewhat.

With research indicating that people listen to music more in their cars than in any other environment, it’s understandable that the era Before Bose isn’t coming back.

“Especially at the higher end of the vehicle market, we see that customers are willing to pay more for a high-performance system,” said Tom Dunn, director of branded audio for Panasonic Automotive. “And what people want just keeps getting higher and higher.”

In fact, the new Acura presages the announcement by two classic “high-end” audio companies to dip a toe or two into the sonic automotive cosmos. Both McIntosh and Sonus Faber — the former an American firm, the other steeped in Italian tradition, both part of the same corporate group — have shown audio systems that they say will be tuned to specific vehicles.

The Sonus application is designed for the new Maserati MC20 sports car, a fitting environment for the company’s artisanal loudspeakers. The McIntosh gear is fitted into the coming Jeep Grand Wagoneer S.U.V. In development for three years in partnership with Jeep engineers and designers, it will be McIntosh’s first in-car audio system in nearly two decades.

“Branded audio is a crowded field, but we’ve looked at this,” said Jeff Poggi, co-chief executive of McIntosh, which is based in Binghamton, N.Y. “We’re the most consistent high-end audio brand for 70 years. This is the next category of growth for us.”

Indeed, with home power amplifiers that sell for $5,000 and up — way up — McIntosh might be opening up an audience that can’t quite make that kind of investment, or to listeners who are perfectly satisfied streaming music onto $99 Bluetooth speakers. Or it might not: Mr. Poggi did not say how much the McIntosh system might add to the price of a superluxury trim level Grand Wagoneer, which is expected to cost about $100,000.

“Ultimately,” he said, “that’s up to Jeep marketing.”