SHANGHAI — Alibaba’s Singles’ Day sale cleared $74.1 billion, the company said just after midnight Thursday, more than doubling its takings from the $38.4 billion the Internet giant recorded last year and reflecting the festival’s new format, which expanded from a single 24-hour period on Nov. 11 to include three additional days from Nov. 1 to 3.

As spectacular as those numbers were, e-commerce’s biggest sale of the year was clouded by concerns over regulatory risk. The release of a Chinese antitrust draft proposal defining anticompetitive behavior limits caused Alibaba’s U.S.-listed shares to close down more than 8 percent, while its Hong Kong-listed stock lost 9.8 percent on Thursday. The draft proposal also hit Tencent and rival JD.com’s stock.

It’s yet another sign that the Chinese government is looking to rein in the influence of its powerful tech giants and Alibaba seems very much to be in the authorities’ crosshairs, just as U.S. tech giants are in the American government’s spotlight. Last week, the listing of Alibaba-subsidiary Ant Group, which would have been the world’s largest initial public offering, was halted in its tracks by Chinese regulators.

Concerns about the condition of couriers was also trending nationally during the sale, sparked by strikes at courier companies that work as contractors to the major e-commerce players.

“Regarding the strike situation, there has been clarification from the courier company but starting from Nov. 1 to now we are seeing logistics has been running very smoothly,” said Sun Jian, Alibaba’s head of Singles’ Day logistics.

Sun said the format, which pauses the sale for one week, was aimed in part at helping ease the challenges of delivering so many packages.

“Actually, we have alleviated pressure for riders as this is an extended period of time and the number of parcels they deal with has declined,” said Sun. He also pointed to increased use of parcel pickup stations, which means that couriers can drop off packages at designated hubs for buyers to later pick up at their convenience instead of trying to coordinate a time to pass the package off directly. 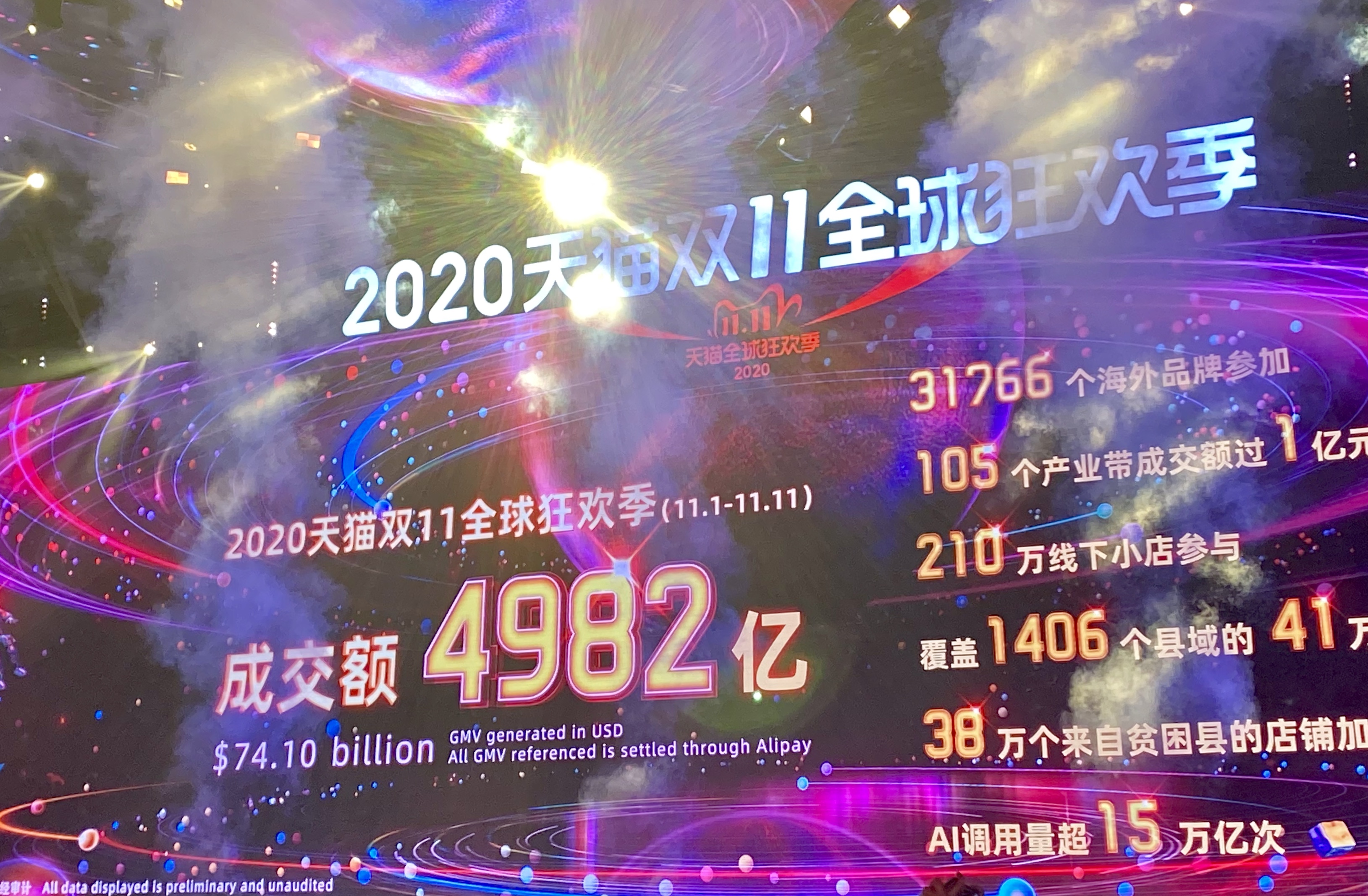 But the sale and e-commerce’s overall exponential growth draws questions. Alibaba said the packages it generated exceeded 2.25 billion as of 11 p.m. on Nov. 11, with one hour of the sale still to go, equaling about the total number of packages that were generated in China nationally in 2010.

Livestreaming was a hot topic again for this year’s sale, with the top five livestreaming key opinion leaders by gross merchandise volume being Viya, Austin Li, Cherie, Kiki and Wang Han. The top 10 merchant livestreams were dominated by electronics labels — Huawei, Xiaomi, Haier, Suning, Midea among them — but beauty brands were the second best-performing merchant category. The Estée Lauder Cos. Inc. ranked fourth in livestream sales followed by Lancôme, which was fifth, and L’Oréal, ninth.

“My take on it is that it’s just the beginning,” said Yu Feng, the general manager of Taobao e-commerce content, who predicted that livestreaming would soon make up one-third of total transactions on Alibaba marketplaces. “Livestreaming can get to the scale of 1 trillion renminbi or more in GMV. As a proportion of total GMV, let’s say 30 percent within two or three years. Certainly, that’s the goal I’m working toward.”