Former Education Secretary Betsy DeVos made no secret of her disdain for a program intended to forgive the federal student loans of borrowers who were ripped off by schools that defrauded their students. She called it a “free money” giveaway, let hundreds of thousands of claims languish for years and slashed the amount of relief granted to some successful applicants to $0.

Then, after a class-action lawsuit made it impossible to stall any longer, her agency built what amounted to an assembly line of rejection.

In Ms. DeVos’s final year in office, her agency denied nearly 130,000 claims — far surpassing the 9,000 rejections in the prior five years — with a system that pressured workers to speed through applications in a matter of minutes, according to internal Education Department documents filed in federal court.

The department aimed to process 5,000 applications a week, the documents show — a standard that required agency employees to adjudicate claims that could stretch to hundreds of pages in less than 12 minutes. Those who did it faster were eligible for bonuses; those who took longer risked being fired. Agency employees rejected claims against hundreds of schools for not including written evidence that borrowers were never required to submit. And the department frequently disregarded its own findings of wrongdoing by schools when reviewing claims from their students.

“The majority of applications will be denied,” Colleen Nevin, a career department official who led the unit that handled claims, wrote in a 2019 memo. Her group had evaluated cases involving 1,400 schools, she wrote, and approved claims involving only three. All the approvals were based on criteria established before Ms. DeVos took office.

The documents were obtained under court order by lawyers in the class-action case, which involves more than 200,000 people who brought claims under a relief program known as borrower defense to repayment. The program permits borrowers who were substantially misled by their schools to have their federal student loans forgiven. Once little used, the system was flooded with claims during the Obama administration after a government crackdown toppled a series of large for-profit chains.

Most of those claims were still lingering when President Donald J. Trump took office, and the lawsuit, filed in 2019 in federal court in San Francisco, sought to compel the department to review claims that had languished for as long as four years. In a settlement agreement struck last year, the department agreed to speed things up and make decisions.

In seven months, the department rejected 91,000 applications — a flood of denials that the borrower’s lawyers described as “nearly worthless pieces of paper that do not explain their decisions.” 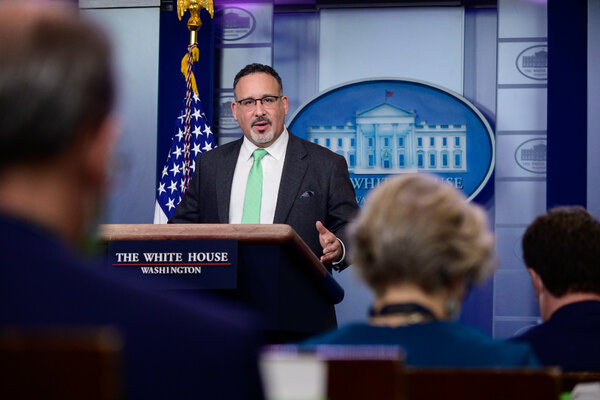 Nearly 95 percent of the borrowers in the case whose claims were decided were rejected, according to court filings. Most — if not all — of the claims that were approved involved applications that the agency was compelled to grant because of precedents created before Ms. DeVos took office.

After the borrowers’ lawyers complained, Judge William Alsup rejected the settlement in October. His ruling strongly criticized the department for “issuing perfunctory denial notices utterly devoid of meaningful explanation at a blistering pace,” and he ordered the department to turn over records — a rare step in lawsuits involving federal agencies’ decisions.

The Education Department declined to comment on the newly filed documents. Ms. Nevin, who still heads the borrower defense team, did not respond to a request for comment. A message left for a representative for Ms. DeVos was not returned.

Lawyers for the department said in an earlier court filing that the agency’s effort to quickly clear its backlog “has meant, to a large extent, focusing on claims that can be denied based on a lack of relevant evidence.”

Ms. DeVos’s successor, Miguel Cardona, took office this month, and on Thursday began dismantling the department’s approach to claims from defrauded borrowers. Mr. Cardona ended and retroactively reversed Ms. DeVos’s policy of granting partial relief, instructing the agency to forgive $1 billion in debt owed by 72,000 people with successful claims — all of them on grounds established during the Obama administration.

“Borrowers deserve a simplified and fair path to relief when they have been harmed by their institution’s misconduct,” Mr. Cardona said.

But that action did nothing to help people like Theresa Sweet, the lead plaintiff in the class-action lawsuit, whose forgiveness application was denied last year after a four-year wait. She graduated in 2006 from the Brooks Institute of Photography, a for-profit school that closed a decade later, after its accreditor accused it of “willfully misleading” prospective students.

Ms. Sweet, who hoped to become a professional photographer, borrowed more than $100,000 to cover the school’s steep tuition fees. Brooks told prospective students that its graduates were in high demand and that its career counselors would help them land jobs. In reality, it offered nothing more than roundups of Craigslist postings for unpaid internships and gig work, she said.

Judge Alsup’s ruling in October — which called the department’s adjudication process “disturbingly Kafkaesque” — was a balm, she said.

“When the judge said that the students had been harmed, I thought finally someone is coming out and saying it,” Ms. Sweet said. “I’ve literally lost track of the number of people who have reached out to me and told me they were considering suicide because their debt had so much negative impact on their lives.”

The agency’s newly released documents describe rejections of tens of thousands of relief applications, even when the department itself had concluded that schools had engaged in wrongdoing.

More than 200 former students levied accusations against Empire Beauty School, a franchised chain that trains hairstylists and makeup artists. Multiple borrowers claimed that their school took out loans in their name without their knowledge.

The Education Department’s own enforcement unit had punished four Empire admissions representatives for forging or falsifying students’ loan documents. Three were criminally convicted of fraud for their actions.

But that didn’t add up to “pattern” of misconduct, the department decided. It rejected all of the borrowers’ relief applications. (The borrowers’ claims “were not presented to Empire for a response,” a school representative told The New York Times, adding that Empire “discovered the activity and self-reported the individuals involved.”)

The Phoenix campus of Carrington College, which runs occupational programs such as dental and nursing training, repeatedly misrepresented its graduates’ careers, an Education Department investigation found. Nearly a quarter of the school’s job claims that were examined by the department between 2012 and 2014 were false. The college did not respond to a request for comment.

But when more than 300 former Carrington students filed claims saying they had been misled about their job prospects, the department denied their claims. The reviewer wrote that the borrowers had failed to provide evidence and that the agency “is not otherwise in possession of evidence to establish a pattern or practice of this type of misconduct.”

Reviewers were under significant pressure to quickly process claims, the new documents show. To clear its backlog, the agency hired dozens of employees and contract lawyers. Their assigned goal was to review at least five cases per hour. Those who did more could earn extra cash and time off. Those who did less were placed on “heightened monitoring” by their managers and subject to remedial action, including termination.

Officially, that system remains in place, said Eileen Connor, the director of litigation for the Harvard Law School’s Project on Predatory Student Lending, which represents the borrowers in the class-action case. Applicants will have no hope of prevailing until the department dismantles its assembly-line approach and gives applications the consideration they deserve, she said.

“There was this whole infrastructure set up to process claims without really contending with them,” Ms. Connor said.

‘It’s tough to find money for the bills’