Home » Business » A Covid-Free Cruise Takes Planning, but the Strip Show Goes On

ABOARD THE WORLD DREAM, IN THE STRAIT OF MALACCA — The drinks were virgin and the distancing was social when the Dream Boys strippers stormed the stage. Masks at poolside were mandatory. Hand sanitizer stations stood within easy reach of the slot machines.

And in a vision of the future of the global cruise industry, passengers aboard the World Dream cruise liner wore small pink contact-tracing pods that monitored their locations and recorded the names of everybody they met with.

“We aboard the World Dream are doing our utmost to keep your cruise with us healthy,” Robert Bodin, the ship’s captain, told his 1,400 passengers as they set sail, in a departure from his usual invitation to relax and enjoy the journey.

The World Dream departs from Singapore two or three times a week on a cruise to nowhere, a rare beacon of hope for an industry under mortal threat. In February, the world watched in horror as the coronavirus infected more than 200 people aboard the Diamond Princess cruise ship, trapping its 3,600 passengers and crew. Governments banned cruises, crews were sent home, and passengers canceled their bookings, idling an industry that employed more than one million people. 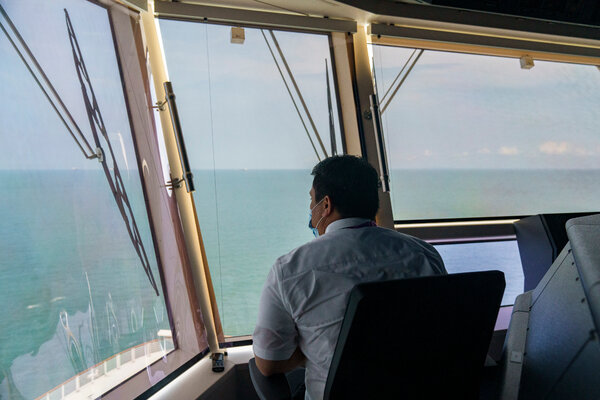 Singapore, along with several countries in Europe as well as Japan, has extended the cruise business a lifeline. As many ships sit idle around the world, the city-state has encouraged voyages on a limited and highly controlled basis.

To find out how this was possible, I booked a three-day voyage on the World Dream. Friends and colleagues wondered why I would want to go on what some of them called “a floating petri dish.” Their fears weren’t baseless. U.S. health officials suggest people avoid cruise ships and have said operators must set out a framework for how cruising could restart. Most major cruise lines in the United States have announced that they will not resume operations until 2021. A week before I set sail, a Caribbean liner from Barbados was forced to turn back after five people tested positive for the coronavirus.

I contacted infectious-disease experts to ask about the risks.

“When I first saw your email, I thought: ‘Bad idea,’” said Dr. Edward Ryan, director of global infectious diseases at Massachusetts General Hospital. Still, he and others told me that Singapore’s restrictions made cruises look safe.

“When I look at what they are doing,” Dr. Ryan said, “they are effectively creating a reasonable bubble.”

Demand is still there. Genting Cruise Lines, the World Dream’s operator, said it had received 6,000 bookings within five days. Bookings for Royal Caribbean, which is preparing to sail from Singapore this month, were six times higher than the company would normally get in October, the cruise line said.

The World Dream offers just about everything it did before the coronavirus struck, said Genting, including a zip line, two pools, a casino, 11 restaurants and cafes, and various shows. Only the karaoke room was closed, per Singaporean government guidelines.

Singapore requires passengers take a coronavirus test before boarding. Instead of Hong Kong, Okinawa or another sunny destination, the ship would dock nowhere but Singapore. Capacity has been slashed in half, to a limit of 1,700 guests.

Following Singapore’s guidelines, the cruise lines upgraded their air filters and enforced social distancing. They required passengers to carry the contact tracing devices, which link to Singaporean monitoring systems. They staged drills for what to do if a passenger showed symptoms: test, contact-trace, isolate any infected people, tell passengers to return to their cabins and sail home.

Royal Caribbean plans to buy Covid-19 insurance for each passenger that will cover costs of up to $19,000 if the guest is infected, said Angie Stephen, the line’s Asia-Pacific managing director.

The measures drove costs about 40 percent higher, said Michael Goh, Genting Cruise Lines’ head of international sales, at a news conference. But they make cruising “one of the safest holidays at this point in time,” he said.

Genting is playing up its health efforts. “Cruise with confidence,” says the World Dream’s website, which highlights the ventilation systems (“100 percent external fresh air”) and food hygiene practices. (“Self-service at buffet restaurants will be suspended.”)

Regina Setar, 38, a part-time security guard, said she studied the measures before accompanying her 70-year-old mother on board. Her mother has diabetes and recently had knee surgery but has been “cooped up at home, watching all the news about Covid.” They paid about $300 for a balcony room.

“I’m not taking any risks,” Ms. Setar said. “I wouldn’t want to. My father would kill me if anything happened.”

Probably the biggest reason I felt safe on the cruise was that, when I boarded the ship, Singapore had gone seven straight days without any coronavirus cases.

I had to take a rapid antigen test, administered by a medical worker gently flicking a short swab around my nostrils. It was not as invasive as the long swabs used for what are known as PCR tests, the standard way of detecting the coronavirus. Antigen tests are easy to administer to large groups of people, but experts warn that they may not catch everyone who is infected.

So Genting takes other steps. Following Singapore’s rules, it has dispatched 40 “cruise ambassadors” in dark blue polo shirts to ensure guests keep their distance from one another. You get accustomed to hearing them say, “Please stand one meter apart.”

Almost all passengers comply, “but there’s always that 1 percent,” said Zulkifli bin Ibrahim, a cruise ambassador. One passenger, Mr. Zulkifli said, shouted at him after he reminded the passenger to wear a mask after swimming.

Meals test the spacing limits. Guests stood on stickers three feet apart, making for long lines at the buffet areas. They called out their food choices to the chefs, who used gloves and tongs as they filled plates.

At one dinner, an elderly woman, her mask pulled down below her chin, was peering at the offerings at the buffet table. A cruise ambassador approached her with a frantic: “Auntie, auntie! Your mask!”

The casino was a major draw. Dozens of gray-haired passengers sat at the rows of slot machines, also three feet apart. There were several tables for mahjong. A group of elderly women, wearing masks, shuffled tiles.

I’m sure I wasn’t the only one worried about the risks. A cough would make me wonder whether the woman two tables down from me was a germ vector.

Still, the passengers seemed grateful for the chance to go somewhere else for the first time since the outbreak, even if “somewhere else” was a cruise ship sailing in the middle of the water.

“It’s been ages since I traveled!” said Doris Yeo, a sales assistant and a cruise aficionado, who was laughing with nine other people, mostly family, spread across two restaurant tables. Her relatives joined, she said, because “they really like gambling.”

“There’s everything under one roof,” she said. “It’s just perfect.”

The next day, I slipped into the theater for the “Verry Christmas” show, an acrobatic performance with a Christmas theme. A drag queen wearing a blond wig, a fur stole and a sequined dress sang “Santa Baby” to a group of Santa Clauses. The masked audience hooted and hollered.

The last night of the cruise, I attended the Dream Boys male burlesque show in a Chinese restaurant. It was billed as a “ladies night where your fantasies really will come to life.” The room appeared full, even as the audience sat at least three feet apart at a series of round tables. Because the show began after 10:30 p.m., no alcohol was served, per Singapore’s Covid-19 restrictions.

The dancers’ routines — a military display with presumably fake weaponry, and another performance with captain’s hats and not much else — were met with catcalls, barely muffled even by masks. At the curtain call, the audience was clapping and cheering, with one woman shouting, “Encore!”

Fun and relaxation take some planning on a Covid-19 cruise. Shows must be booked in advance. Swimmers must do the same — the main pool allows 26 swimmers at a time, and they can swim for only an hour.

With a bit of planning, Raymond Lim and his wife managed to swim, hit the Jacuzzi and take ballroom and line-dancing classes. (“Quite fun.”) He also took a class on how to paint on pebbles. (“A bit lame.”)

Mr. Lim, who works for the Singapore Tourism Board, called it a “good break” but “a muted cruise experience.” Compared with his past cruises, he said later, he couldn’t find a lounge to chill out, and there was “no spontaneous dance.”