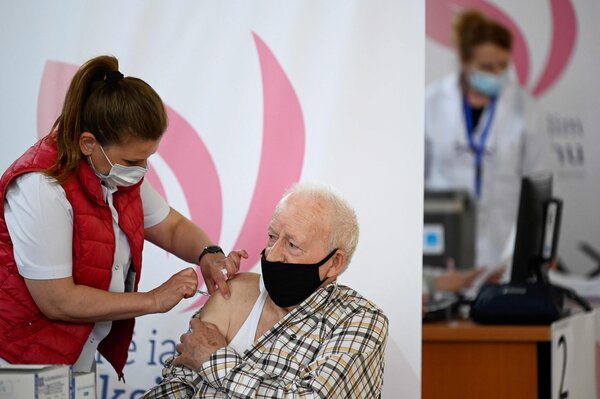 Revelations that both the AstraZeneca and Johnson & Johnson coronavirus vaccines may, in extremely rare circumstances, cause blood clots have dealt a fresh blow to Europe’s already beleaguered vaccination push.

On Tuesday, Johnson & Johnson said it would pause the rollout of its vaccine in Europe and the United States over those concerns. Separately, some European countries have restricted use of the AstraZeneca vaccine for younger people, while other nations, like Norway and Denmark, are not administering it at all.

The troubles cast a cloud over the E.U.’s vaccine rollout just as it has finally begun to gain momentum after months of supply shortages and logistical problems. They risk further eroding Europeans’ willingness to be vaccinated.

Game plan: European officials intend to have fully inoculated 70 percent of the E.U.’s adult population — about 255 million people — by the end of the summer. These latest problems may jeopardize this goal.

By the numbers: Six recipients of the Johnson & Johnson vaccine in the U.S., out of nearly seven million, developed the disorder within about two weeks of inoculation.

Related: Many common drugs and activities have a far higher risk of resulting in blood clots — among them, taking the contraceptive pill, flying and contracting Covid-19 itself.

Chancellor Angela Merkel is moving to create a nationwide lockdown system in Germany. At current infection levels, the system could lock down more than half the country.

The World Health Organization called on governments to suspend the sale of live wild mammals in food markets to help prevent the emergence of new diseases.

India is fast-tracking vaccines approved in other countries in order to combat a Covid outbreak that is currently the world’s biggest.

President Biden will withdraw the remaining U.S. troops from Afghanistan by Sept. 11, the 20th anniversary of the attacks that launched the U.S. into its longest war. Mr. Biden overruled warnings from his military advisers that the departure could prompt a resurgence of terrorist violence.

The decision will keep more than 3,000 troops on the ground beyond the May 1 deadline set by President Donald Trump. Officials said that by fixing a definite date for the withdrawal, Mr. Biden hoped to avoid an increase in violence threatened by the Taliban if the U.S. stayed beyond May 1. The withdrawal will begin this month.

Mr. Biden rejected the Pentagon’s push for a “conditions-based” withdrawal, in which the U.S. would remain until Afghanistan’s security forces could assert themselves.

What’s next: Turkey is holding an Afghan peace summit beginning April 24 as part of the U.S.-backed diplomatic push. Turkey’s foreign ministry announced that representatives from Afghanistan and the Taliban would attend, although the Taliban said they had not agreed to the date, Reuters reports.

Analysis: A new intelligence report released Tuesday offered a grim assessment — prospects for a peace deal in the next year are low, and the Taliban are likely to make battlefield gains.

Iran announced it would begin enriching uranium to a level of 60 percent purity, three times the current level and much closer to that needed to make a bomb, a move that appeared to be in retaliation for an Israeli attack that knocked the Natanz plant offline.

The deputy foreign minister, Seyed Abbas Araghchi, also announced that the country would replace several thousand centrifuges damaged in the attack and add 1,000 more, increasing the plant’s capacity by 50 percent.

Context: Mr. Araghchi is in Vienna this week for indirect talks with the U.S. meant to restore the nuclear deal, which could be undermined by the attack or by Iran’s announcement.

Japan plans to discharge Fukushima wastewater into the ocean over local opposition and international concern.

A white U.S. police officer who fatally shot a Black man during a traffic stop near Minneapolis resigned on Tuesday, along with the chief of police in the suburban community. Police officials said the officer had confused her gun for her Taser.

The U.S. will send an extra 500 military personnel to Germany, Defense Secretary Lloyd Austin said Tuesday, as Europe grows uneasy over Russian troop movements near the border with Ukraine.

An Irish artist’s doctored portraits of Cambodian prisoners under the Khmer Rouge have caused an outcry from Cambodians worldwide who see the portraits as a desecration of a national tragedy. In some of the portraits, the artist put smiles on the victims’ faces.

What Else Is Happening

The “world’s longest rabbit,” who goes by Darius, vanished from his enclosure in an English garden, in an apparent kidnapping.

Ramadan has begun for millions of Muslims around the world — the second time the religious holiday has occurred during the pandemic.

An Austrian artist canceled plans to sell 300 items of digital art, also known as NFTs, because of their mind-boggling environmental footprint.

A new rule banning professional cyclists from tossing their water bottles, or bidons, into the crowd has caused an outcry among riders.

After a 13-year-old girl in Venezuela was raped, just two people were arrested: her mother and a teacher, both of whom had helped her end her pregnancy.

The case has prompted a national debate about legalizing abortion, which is illegal in almost all circumstances in the country. Activists say it demonstrates how Venezuela’s economic and humanitarian crisis has stripped away protections for young women and girls. The accused rapist remains free.

Imagine being charged with taking apart what is arguably the best-known clock in the world. That’s the job of Ian Westworth, a certified repairer and conservator of antique clocks. He spoke to The Times about restoring the Palace of Westminster’s Elizabeth Tower and its Great Clock, a yearslong project that has been hit with delays and rising costs.

Why was the restoration needed?

The point of the work is to safeguard both the clock and the tower for future generations. If this work isn’t carried out, there is a risk that the clock mechanism  could fail and that the structural integrity of the tower could be at risk.

At the start of the restoration, we winched pieces of it down to ground level, as it was so heavy, and took it off site for a complete overhaul. We’ve been able to repaint, clean, repair and document each piece (there are hundreds). The original winding mechanism installed in 1912 will be put back in place when the Great Clock returns home.

What was the trickiest part?

The hardest part is just the sheer size of the clock and all of its parts, having to remove it all from the tower and then clean, repair and paint and then put back into the tower. It’s a very complex task. There are some little repairs, but no plans for great changes to the mechanism.

Will the public see differences when the project is done?

The most noticeable changes will be to the exterior: The clock dials are being restored to their original Victorian color scheme of Prussian blue. A paint analysis took it all the way back to bare metal and discovered that the original color was blue. The decorative shields on the tower are being repainted and will be a lot more vibrant.

The key to these springtime sandwiches is a lot of butter, a lot of radishes and plenty of salt.

The Pritzker-winning architect Frank Gehry recently turned 92. But he has no plans to retire. “What would I do?” he told The Times. “I enjoy this stuff.”

Born in the Paris suburbs, the singer Eddy de Pretto has made waves with two albums that draw as much from ’60s chanson as from contemporary hip-hop.

Here’s today’s Mini Crossword, and a clue: Acid, by another name (three letters).

That’s it for today’s briefing. Have a great day. — Natasha

The latest episode of “The Daily” is on the craze for the digital artworks known as NFTs.

You can reach Natasha and the team at [email protected].

TreeHouse Foods settles with Jana, appoints two to its board