Rumbles of discontent from Conservatives in the U.K. 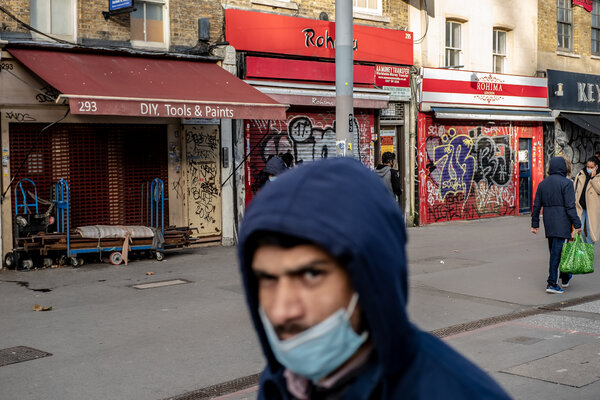 In England, a rebellion over coronavirus restrictions

Less than a year after Prime Minister Boris Johnson of Britain won a landslide election victory, he faces a significant revolt from his own party over his handling of the pandemic. Lawmakers in his Conservative Party want to go further in easing the limits on public life, particularly for the hospitality industry, against the guidance of his scientific advisers.

Despite this rebellion, much of England will this week swap lockdown for less stringent coronavirus restrictions, after Parliament approved new rules on Tuesday, returning to a three-tier system of regional restrictions. Some 55 million people will be in the top two tiers. Scotland, Wales and Northern Ireland set their own coronavirus rules.

View from the opposition: The Labour leader, Keir Starmer, instructed members of his party not to vote, aiming neither to endorse measures he described as insufficient nor to stop the only set of restrictions available. He has called for more financial support for those struggling from the economic fallout of the pandemic.

Related: The British department store Debenhams announced on Tuesday that it would begin shutting down, after more than a year of restructuring and several months of trying to find a buyer.

Pfizer and BioNTech have submitted a final application to the European health authorities for approval of their Covid-19 vaccine, the companies announced Tuesday. Initial approval could come by year’s end.

In its latest global economic outlook released Tuesday, the Organization for Economic Cooperation and Development predicted that recovery would be slow for most countries except China.

President Emmanuel Macron of France said he was considering instituting a widespread vaccination campaign next spring, after a more targeted one for health workers and vulnerable populations.

The U.S. prepares for the Biden administration

In a further affirmation of President-elect Joe Biden’s victory and a major repudiation of President Trump’s baseless claims that he was defrauded in last month’s election, Attorney General William Barr said the Justice Department had not uncovered significant voting fraud, while Senator Mitch McConnell, the Republican majority leader, referred for the first time to a “new administration,” seemingly a tacit acknowledgment of Mr. Biden’s win.

As the U.S. prepares for the transition to the Biden administration, its economy hangs in limbo. Mr. Biden has called for Congress to come together to pass a “robust” relief package to help households and businesses.

The Federal Reserve chair, Jerome Powell, backed Mr. Biden’s reach-across-the-aisle approach, warning Congress that “the outlook for the economy is extraordinarily uncertain” without an effort to smooth the transition.

Biden gets the boot: The president-elect donned a striking orthopedic accessory after suffering hairline fractures while playing with one of his dogs over the weekend.

Related: Mr. Trump’s lawyer, Rudy Giuliani, is said to have discussed with the president as recently as last week whether he could receive a pre-emptive pardon before Mr. Trump leaves office. Mr. Giuliani’s potential criminal exposure is unclear.

The Kremlin’s new blend of hard and soft power

The vicious war between Azerbaijan and Armenia over the disputed region of Nagorno-Karabakh has settled into a tense truce enforced by heavily armed Russian troops.

For Russia, long a provocateur in the broader Caucasus region, the peacemaker role is a new opportunity as it struggles to maintain its influence in the former Soviet lands.

To stop the war that killed thousands this fall, President Vladimir Putin departed from the iron-fisted playbook Russia has used in other regional conflicts in the post-Soviet period, employing a lighter touch instead. He leaned on the threat of Russia’s military power, forcing concessions from both sides but gaining a grudging measure of trust in the rival camps.

Quote: “They say that things will be OK,” said one ethnic Armenian who remained in the Nagorno-Karabakh capital, Stepanakert. “I believe in Vladimir Vladimirovich Putin.”

A surprise clutch of eggs from a wild-caught female Phyllium asekiense, a leaf insect from Papua New Guinea like the one above, has helped to solve a puzzle that had long stumped entomologists: why males from the species had yet to be identified.

“You could study rocks your whole life, or you could study diamonds,” said a scientist involved in the study, who had devoted most of his career to beetles. “What a fabulous insect.”

Slack acquisition: Salesforce said on Tuesday that it would buy the workplace software company Slack for $27.7 billion in cash and stock, the latest in a wave of deals as the pandemic increases demand for tools that enable people to work remotely.

Chang’e-5 spacecraft: The Chinese probe landed on the moon, the Xinhua state news agency reported on Tuesday. It will spend two days gathering rocks and dirt from the lunar surface, with the goal of returning the first cache of moon samples to Earth since 1976.

Elliot Page: The Canadian actor and producer, who was nominated for an Oscar for his role in the 2007 movie “Juno,” announced that he is transgender.

Snapshot: Above, Times Square in October. For months now, the typical throngs of visitors have disappeared from New York City’s famous destination, and there is an eeriness to the emptiness. “Look around,” said one souvenir salesman. “Without the Broadway shows, the office workers, the tourists, the crowds, you got no Times Square.”

Lives lived: The British conservation biologist Georgina Mace, who helped to provide a firm scientific foundation for a key list of endangered species called the Red List and, in turn, to reveal the scale of the ecological emergency that the planet faces, died earlier this year at 67.

What we’re reading: This Washington Post article, exploring the life of America’s most prolific serial killer, Samuel Little, who has confessed to killing 93 people. Tom Wright-Piersanti, an editor on the Briefings team, says, “It’s an eye-opening (and unnerving) look at a man who took advantage of America’s prejudices to avoid capture for decades.”

Cook: This creamy yet bright spaghetti al limone is simple, elegant and destined to become one of your favorite weeknight dishes.

Watch: Britain’s National Theatre has begun its own streaming service, complete with recent and archival gems starring such greats as Olivia Colman and Tom Hiddleston.

Create: The perfect holiday cookie box. It’s a tangible, safe way to spread joy at a time when we need it more than ever.

Stay as busy as a bee even while you’re stuck indoors. Our At Home collection can show you how.

The joy of our four-legged colleagues

Throughout anxiety-filled months, when co-workers have often been visible only on a screen, staff members at The Times — and, frequently, their colleagues — have found solace in fluffy (or scaled or feathered) friends.

“Sometimes we have a little bit of a rough close on Saturday mornings, especially when news is happening,” Andrea Zagata, a staff editor for the Print Hub, said of the day’s deadlines. “Every now and again, someone will say, ‘Hey, can you put that puppy on?’ She’s been kind of a reward.”

Ms. Zagata adopted the dog from a Manhattan rescue organization in September. Since then, Rosalie, with her big brown eyes and an ear that sits permanently perked up, has been a constant presence at Ms. Zagata’s side, or in her lap.

She is one of many pets that have found homes this year, part of a surge in animal adoptions all over the United States during the pandemic. (Staff members at The Times seem to have contributed in their own way to this increase.)

Photos of these four-legged friends proliferate on Slack, the messaging platform, either in a channel designated specially for pet picture-swapping or among their own teams. Sara Bonisteel, a senior staff editor on the Food desk, made a family announcement to colleagues when she adopted two tuxedo cats named Astra and Diomedes.

“We’re so far into this pandemic that I feel like you get set in your pandemic ways,” Ms. Bonisteel said. She added, referring to the adjustment to her new cats: “It will break up that structure, and that’s a good thing. It provides a little lift.”

And in a year filled with sadness and physical and emotional distance, seeing a cute creature onscreen can help bring co-workers just a little bit closer.

That’s it for this briefing. Have a great day.

Thank you
Theodore Kim and Jahaan Singh provided the break from the news. You can reach the team at [email protected]

P.S.
• We’re listening to “The Daily.” Our latest episode is about Janet Yellen, the president-elect’s pick for Treasury secretary.
• Here’s our Mini Crossword, and a clue: School zone sign (four letters). You can find all our puzzles here.
• The word “coatigan” first appeared in The Times on Monday, according to the Twitter account @NYT_first_said.
• Nicholas Casey, who led one of our most challenging assignments as Caracas bureau chief, will become our first Madrid bureau chief.

Opinion | Manic Panic on the Potomac