People line up for unproven vaccines in China. 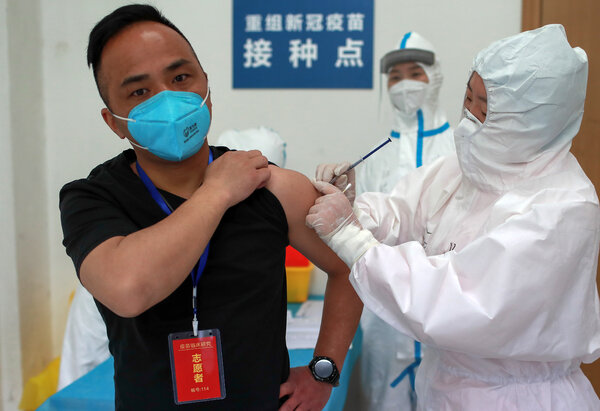 A scramble for unproven vaccines in China

Though China’s vaccine candidates have not formally been proved safe or effective, officials have been injecting them into thousands of people under an emergency-use policy, in an effort to demonstrate their safety and effectiveness.

The campaign has succeeded perhaps too well. In the city of Yiwu, 500 doses were consumed within hours. Other cities are limiting doses. The overwhelming demand has inspired a cottage industry of scalpers charging as much as $1,500 for an appointment.

Users could be taking big risks. People who have taken the vaccines believing they are safe might engage in risky behavior. They could be barred from taking another, better vaccine because they have already been injected. In a few cases, unproven vaccines have caused health risks. It is unclear how many people have received a vaccine candidate.

Blood samples from recovered Covid-19 patients suggest a powerful immune response that could last years, and maybe even decades, researchers reported. The research has not been peer-reviewed nor published in a scientific journal. But it is the most comprehensive and long-ranging study of immune memory to the coronavirus to date.

Belgian authorities violated the human rights of nursing home residents by failing to protect them during the first months of the pandemic and leaving some to die prematurely, according to a report by Amnesty International.

President-elect Joe Biden warned on Monday that “more people may die” from the coronavirus if President Trump does not agree to coordinate planning for the mass distribution of a vaccine when it becomes available.

President Trump asked senior advisers during a meeting last Thursday whether he had options to take action against Iran’s main nuclear site in the coming weeks. The president was dissuaded from moving ahead with a military strike.

The meeting took place a day after international inspectors reported a significant increase in Iran’s stockpile of nuclear material. Mr. Trump might still be looking at ways to strike Iranian assets and allies, including militias in Iraq, officials said.

A range of senior advisers, including Vice President Mike Pence and Secretary of State Mike Pompeo, warned Mr. Trump that a military strike could escalate into a broader conflict in the final weeks of his presidency.

What’s next: Mr. Trump is applying more sanctions on Iran that will be hard to reverse. Tehran is heading to elections in June. That complicates President-elect Joe Biden’s pledge to re-enter the nuclear agreement, our chief diplomatic correspondent in Europe writes.

The Chinese tech giant said on Tuesday that it would sell Honor to a Chinese state-owned entity. Huawei has been under strain as the Trump administration’s restrictions on its business have started to bite.

The company did not disclose the size of the sale and said that once the transaction was complete, it would not hold any shares in the Honor business or be involved in its management.

The move comes after a barrage of U.S. restrictions on Huawei’s purchases of components and software for its smartphones and gear.

Context: Huawei was the world’s second-biggest smartphone seller in the latest quarter, according to the research firm Canalys. But the company’s uncertain future has caused its sales in key markets outside China, such as Europe, to fall sharply.

If you have 4 minutes, this is worth it

A furor over fat shaming

“Slim.” “Beautiful.” “Rotten.” “Extra Rotten.” “Rotten to the Core.” This is how a Taiwanese chain, RT-Mart, described sizes for women’s clothing, ranging from small to XXL, in one of its superstores in China.

Dismay and anger over the size chart erupted this week in China, where fat shaming is common on the internet and in advertising. RT-Mart later apologized, saying that it was “deeply sorry for the inappropriately worded marketing material and the offense it caused.”

Thailand protests: The police fired water cannon and tear gas at protesters marching on parliament on Tuesday, and at least 40 people were hurt in the most violent confrontation since a youth-led protest movement emerged in July, Reuters reported.

Hurricane Iota: The hurricane made landfall on Monday as a Category 4 storm in Nicaragua, battering a region still recovering from Hurricane Eta, which struck less than two weeks ago. It has now weakened to a Category 1, and officials say no deaths have been recorded so far.

Dresden heist: The German police on Tuesday arrested three men and said they were searching for two others in connection with the theft of gold, diamonds and precious stones from three highly prized collections of Baroque royal jewels in a museum in Dresden last year.

Twitter update: On Tuesday, the social media network said it would introduce a feature called Fleets, allowing users to post ephemeral photos or text that will automatically disappear after 24 hours. It follows Snapchat, Instagram and Facebook, which offer similar features.

Snapshot: Above, Marjorie Law transporting herself to Hogwarts from Santa Clarita, Calif. On TikTok, Gen Z “Harry Potter” fans edit themselves into the movies in a quest for escapism, representation and community.

What we’re reading: This NPR investigation into the ways Chinese vendors have used e-commerce and social media to market fentanyl worldwide. Amelia Nierenberg, who writes the Coronavirus Schools Briefing, says: “This is a must-read for anyone following the ongoing opioid crisis. (During the pandemic, it’s only gotten worse.)”

Cook: This simple lentil and sweet potato salad has a little secret: a toasty, brown butter vinaigrette perfumed with sage.

Watch: With travel significantly curtailed, the closest you can get to Paris may be onscreen. These movies will take you there.

Do: Getting back to your workout routine after recovering from Covid-19 requires some caution. Here are tips for taking it slow.

How is your week going? At Home has our full collection of ideas on what to read, cook, watch, and do while staying safe at home.

Masayoshi Son on his regrets

The founder and chief executive of SoftBank has made billions from his prescient bets over the years, including an early investment in Alibaba of China, but he has also made some mistakes. Mr. Son spoke at an online event hosted by The Times’s DealBook newsletter on Tuesday. Here’s what he had to say.

Mr. Son spoke as much about his missed opportunities as he did his successes. His philosophy: “I would rather accept my stupidity and my ignorance — my bad decisions — so that I can learn from my mistakes,” he said. “It’s better to accept them, so I become smarter.”

He noted that he had the opportunity to become an early investor in Amazon, and even spoke with Jeff Bezos, the Amazon chief, about taking a 30 percent stake in the company before it went public.

But Mr. Son also admitted to making a big mistake with WeWork. SoftBank poured billions into the co-working business, betting that it would transform the nature of offices and “elevate the world’s consciousness” — and then was forced to bail it out after its plans to go public cratered.

“We made a loss on WeWork,” he said. “That was my mistake.” But he noted that the company had other hits, and its investments over all are up by at least tens of billions of dollars.

Mr. Son also expressed some admiration for Adam Neumann, the once-highflying WeWork chief executive who persuaded him to invest in the company in the first place. Mr. Neumann also made mistakes, Mr. Son said, but “I’m a big believer that he will be successful, and that he has learned a lot from his prior life.”

Thank you
Carole Landry helped write this briefing. Theodore Kim and Jahaan Singh provided the break from the news. You can reach the team at [email protected]

P.S.
• We’re listening to “The Daily.” Our latest episode is about the second coronavirus wave in Europe.
• Here’s our Mini Crossword, and a clue: Catchy song, in slang (three letters). You can find all our puzzles here.
• Tracy Ma, a visual editor at The Times, recently discussed what makes a creative visual package in this It’s Nice That video.

Commentary: Why a Republican won’t beat Trump in 2020