China clamps down on travel amid new cases.

We’re covering China’s warnings and restrictions following community spread, 12 stories from this year to boost your mood and why Italians are using flowers to promote their vaccination campaign. 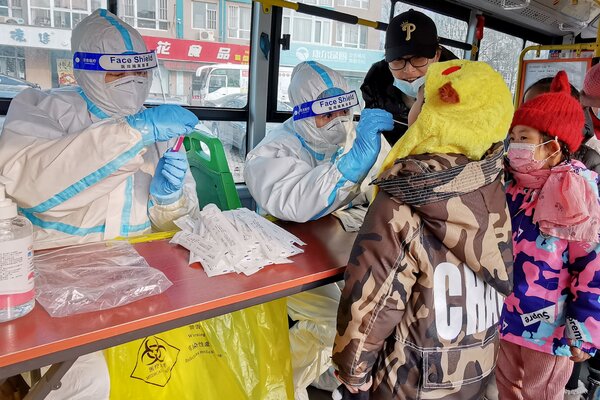 Officials have been testing hundreds of thousands of people in Beijing and millions in the port city of Dalian, after the country recorded 42 locally transmitted coronavirus cases in the past week. The outbreak interrupted months of near-zero case numbers. Residents of Dalian have been advised not to leave the northern port city.

The resurgence comes ahead of the Lunar New Year, during which hundreds of millions of Chinese people travel to their hometowns. The authorities are already looking forward with caution: This year’s travel helped spread the virus.

The government is discouraging Beijing residents from traveling and gathering. Travel companies have been told not to organize any group tours to Beijing during the holiday, which next year falls on Feb. 12.

Other parts of the country are taking precautions as well. Anhui Province, home to many of China’s migrant workers, intends to test and monitor all those who return for the holiday. Experts say a plan to vaccinate 50 million people (although with unproven vaccines) and efforts to ramp up testing are reasons not to worry about the travel period.

Novavax says it is starting the final stage of testing for its coronavirus vaccine. The company has promised doses to New Zealand, the Philippines and Indonesia, among others. The doses must be kept refrigerated but do not require freezing, making storage easier than other vaccines.

President Trump signed a $900 billion pandemic relief bill, restarting unemployment benefits that had lapsed and providing stimulus checks of $600 for most Americans.

Indonesia will bar entry to international visitors for two weeks from New Year’s Day to stem the spread of new, potentially more contagious strains of the coronavirus, Reuters reported.

Former enemies fight together in Ethiopia

For weeks, Prime Minister Abiy Ahmed of Ethiopia has denied that soldiers from Eritrea — a country that Ethiopia once fought in a brutal war — had entered Tigray.

But according to aid workers, refugees, United Nations officials and diplomats, Eritrean soldiers have joined the fighting in Tigray, apparently in coordination with Mr. Abiy’s forces, and face credible accusations of atrocities against civilians.

The soldiers have rampaged through refugee camps, committing human rights violations, officials and witnesses say. It remains unclear how many soldiers are there, but a communications blackout has slowly been lifting and more accounts are becoming available.

Context: Mr. Abiy and President Isaias Afwerki of Eritrea have a shared hostility toward the rulers of Tigray. For Mr. Abiy, the Tigray People’s Liberation Front was a dangerous political rival — a party that had once led Ethiopia. For Mr. Isaias, it was a deeply personal feud — a story of grievances, bad blood and ideological disputes that stretched back to the 1970s, when Eritrea was fighting for independence from Ethiopia.

Turkish people ‘at the point of explosion’

Turkey had been grappling with a falling currency and double-digit inflation for two years when the coronavirus pandemic hit in March.

Nine months in, there are signs that a significant portion of the population is overwhelmed by debt and increasingly going hungry. In a recent survey, 25 percent of respondents said they could not meet their basic needs. “People are at the point of explosion,” a tobacco shop owner said.

Critics say President Recep Tayyip Erdogan’s fixes came too little, too late. His party’s standing has dropped to around 30 percent, its lowest point in 19 years. “The next elections are not a slam dunk,” one analyst said.

Context: Things came to a head in November, when the government admitted that it had been understating the extent of Turkey’s outbreak by not recording asymptomatic cases, and new data revealed record infection levels in the country.

If you have some time, this is worth it

A teacher in Iran inherited $300,000. Instead of buying a new car, he decided to buy 343 tablets for students shut out of remote learning because their families could not afford them. His friends and family told him he was crazy, but the teacher said that “seeing the sweet smile on the children’s faces and knowing I had given them the gift of education is enough.”

As much as the pandemic has been a story of devastation and loss, it has also been one of resilience. Our correspondents around the world shared these stories that speak to the strength of the human spirit.

Trial in China: Zhang Zhan, a former lawyer who became a citizen journalist during the lockdown in Wuhan, was sentenced to four years in prison for documenting the early days of the coronavirus outbreak. She is the first person known to be tried for challenging the Chinese government’s narrative about the pandemic.

Saudi women’s rights: One of the country’s best-known prisoners, the activist Loujain al-Hathloul, was sentenced to five years and eight months in prison. Ms. al-Hathloul was first arrested in May 2018 along with others who had pushed to end a ban on women driving.

Snapshot: Above, an example of one of the 1,500 pavilions to be decorated with primroses in Italy. The flowers have been designated the official symbol of the country’s vaccination campaign and will mark the locations where people can get inoculated. The slogan for the program: “With a flower, Italy comes back to life.”

What we’re reading: This BBC article on the concept of “Feierabend,” which helps Germans separate work from free time. We could learn a lot from setting clear boundaries between the different parts of our day, with simple actions like changing clothes or taking a bike ride.

Cook: This spicy white bean stew with broccoli rabe can use up much of what you’ve got on hand. It’s one of our 50 most popular vegetarian recipes of 2020.

Watch: “Wonder Woman 1984,” starring Gal Gadot, packs in a lot of stuff and characters but without purpose or urgency, our reviewer writes.

Do: Some people re-evaluated their relationship to things in 2020 and decided to stop buying. Here’s what they learned.

To help you bid farewell to 2020, have a look at our At Home collection of ideas on what to read, cook, watch and do while staying safe at home.

How it feels to get the vaccine

Tens of millions of people are waiting their turn for a coronavirus shot and many are wondering what to expect. The first Americans to be part of the biggest vaccination program in U.S. history spoke to our reporters about how they felt afterward.

Recipients of vaccines recounted a wide spectrum of responses, from no reaction at all — “Can’t even tell I had the shot,” a hospital worker in Iowa City said — to symptoms like uncontrolled shivering and “brain fog.” A nurse assistant in Glendora, Calif., wondered whether the fever he ran was a side effect of the vaccine or a sign that he had been infected by one of his patients.

And there was a dizzying variety of sore arms. Some likened the pain to that from a flu shot; for others, it was considerably worse.

Dr. Matthew Harris, 38, an emergency medicine doctor in Great Neck, N.Y., was up all night with a fever, shivering underneath a blanket, after receiving the first shot. He had joint pain in his wrists and shoulders that lasted into the next day.

He later posted about his reaction, with the hashtag #stillworthit. “Everyone has read, ‘This is the light at the end of the tunnel,’” Dr. Harris said in an interview. “But are people going to feel great 100 percent of the time after this vaccine? No. And if we’re not honest with them, how can we expect them to trust us?”

Most vaccine recipients who spoke to The Times for this article stressed that they had no regrets about getting the shot. The Food and Drug Administration has found the vaccines to be safe and remarkably effective. And public health leaders say mass vaccination is the only hope for controlling the virus.

Thank you
Carole Landry helped write this briefing. Thanks to Theodore Kim and Jahaan Singh for the break from the news. You can reach the team at [email protected]

P.S.
• We’re listening to “The Daily.” Our latest episode revisits a bar we profiled in its battle to survive the coronavirus.
• Here’s our Mini Crossword, and a clue: Divisible by two (four letters). You can find all our puzzles here.
• Everdeen Mason joined The Times from The Washington Post as our first editorial director for Games.

Opinion | Colleges, Conservatives and the Kakistocracy

Opinion | Raising Boys Who Have Empathy and Emotion