We’re covering challenges for Israel’s new government and a rare interview with a top Chinese virologist. 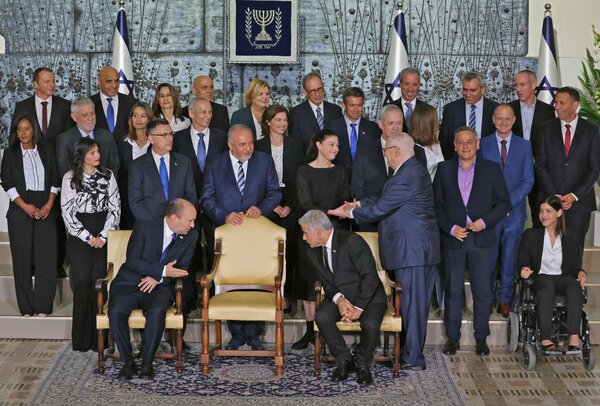 Israel’s fragile new coalition government gave a first glimpse of its priorities on Monday, as ministers announced plans to repair ties with U.S. Democrats, investigate a disaster at a religious site that killed 45 and permit a far-right march through Jerusalem.

Separately, Benny Gantz, the defense minister, issued a formal call for a commission of inquiry into a stampede at the holy Jewish site on Mt. Meron that killed 45 worshipers last month. Netanyahu’s government, in contrast, did not call for an investigation for fear of angering ultra-Orthodox politicians.

But allowing a far-right Jewish march through Palestinian neighborhoods in East Jerusalem stuck to a decision made in the final days of the Netanyahu administration. Hamas vowed to respond.

China’s rising military ambitions present challenges that must be addressed, NATO said on Monday, the first time it has portrayed the country’s armed forces in such a potentially confrontational way.

While the communiqué described Russia as a “threat” to NATO, using tough language that was not necessarily a surprise, it was the description of China that attracted unusual attention.

China is not directly called a threat, but NATO states that “China’s growing influence and international policies can present challenges that we need to address together as an alliance.” The leaders cited Beijing’s expanding nuclear arsenal and more sophisticated delivery systems as well as its expanding navy and its military cooperation with Russia.

What’s next: Leaders signed off on plans to spend next year updating the organization's strategic concept — the group’s statement of values and objectives —taking into account challenges from cyberwarfare, artificial intelligence, disinformation, and new missile and warhead technologies.

A top Chinese virologist speaks out

To the Chinese government and public, Shi Zhengli, who works at the Wuhan Institute of Virology, is a hero who helped curb the epidemic. To American politicians and scientists, she is the key to whether the world will learn if the virus escaped from a lab.

“How on earth can I offer up evidence for something where there is no evidence?” she said in a rare interview with Times reporters, her voice rising in anger during the brief, unscheduled conversation.

Over email, she denounced suspicions of the lab origins theory as baseless, including the allegations that several of her colleagues may have been ill before the outbreak emerged.

The big question: The speculation boils down to one central question: Did Dr. Shi’s lab hold any source of the new coronavirus before the pandemic erupted? Dr. Shi’s answer is an emphatic no. But China’s refusal to allow an independent investigation into her lab, or to share data on its research, make it difficult to validate Dr. Shi’s claims.

Thailand’s government promised people it would vaccinated 70 percent of the population, for free, beginning in early June. The campaign is stumbling and full of delays and cancellations.

An American father and son pleaded guilty in Tokyo on Monday to helping Carlos Ghosn, the former Nissan chief, flee Japan as he faced trial on charges of financial wrongdoing.

Unusual activity at the Taishan nuclear power plant in China has drawn international attention, as two French companies involved in the plant acknowledged problems on Monday but said they could be handled safely. The power plant said no leak had been detected.

More than 60,000 people have signed a petition calling for a movie about the Christchurch mosque massacre to be shut down. Muslims denounced the movie’s focus not on the community’s pain and resilience, but on the response by Prime Minister Jacinda Ardern.

How do you buy a work of art? The question is, on the surface, a simple one. But in practice, in addition to the disposable income one needs that has been hard to come by in the pandemic, it can be hard to keep up with trends, go into galleries and not be intimidated, and sort through the sheer quantity of options and price points. Our T magazine editors compiled a sweeping guide to how to buy, based on interviews with gallery owners, collectors and artists.

What if rush hour never returned?

Rush hour has long ruled our lives, our cities, our tax dollars. But with a little more remote work, it doesn’t have to.

Traffic has begun to return as the economy has revived. But planners are now considering that it won’t revert to its old shape. About a third of workers in the U.S. hold jobs that economists say could be done remotely. If many of them worked at home one day a week, peak commuting trips would decline by a few percentage points. That small number could be a big deal, because roadway congestion is nonlinear — a few more cars at a tipping point can strangle a highway.

“So much of the central paradigm of transportation planning for the last two to three generations has been, ‘How do we make the peak of the peak suck less?’” Christopher Forinash, a transportation planner, told The Upshot. If rush hour ceases to dominate planning, that could free up space, resources and desire for bike lanes and better bus service, which could take even more cars off the roads.

This vegan version of larb, a ground meat dish that originated in Laos, features crumbled extra-firm tofu and a spicy, citrusy sauce. Serve it with some three-herb iced tea.

Want to learn more about how the movies were made? These books are a good place to start.

Coffee has been linked to a reduced risk of all kinds of ailments, including Parkinson’s disease, melanoma, prostate cancer, even suicide.

That’s it for today’s briefing. See you next time. — Melina

P.S. Anatoly Kurmanaev, who has spent most of his journalistic career in Venezuela, joins our Mexico City bureau as a correspondent.

The latest episode of “The Daily” is on Apple’s relationship to China.

Whet Moser wrote the Arts and Ideas. You can reach Melina and the team at [email protected].

Opinion | A Historian of Conservatism on Lies, Loyalty and Liz Cheney

Opinion | As Jeff Bezos Takes Off, Meet His Earthbound Successor

The Specter of Inflation