An impeachment charge against Trump.

We’re covering the move to impeach President Trump, the soaring coronavirus death toll in the United States and fading hopes in Kashmir. 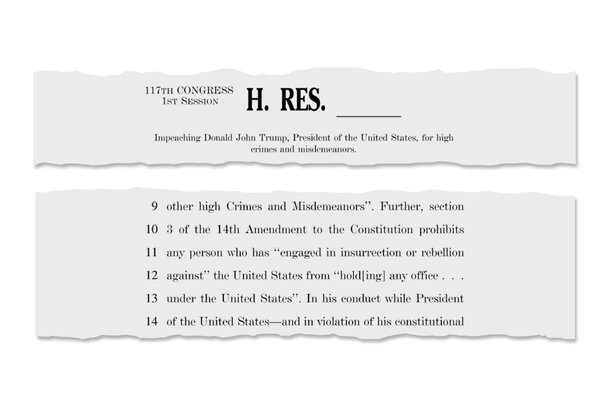 Democrats move ahead with impeachment push

House Democrats introduced an article of impeachment against President Trump for inciting the mob that attacked the Capitol last week. Republicans blocked a separate move to ask Vice President Mike Pence to strip Mr. Trump of power under the 25th Amendment, meaning the House would have to call a full vote on that measure, probably today.

If Mr. Pence does not intervene “within 24 hours” of the measure’s passage and the president does not resign, House leaders said they would move on Wednesday to consider the impeachment resolution on the floor, just a week after the attack.

More than 210 Democrats have signed on to the charge, just shy of a majority of the House. Several Republicans were said to be considering voting to impeach for the first time, though party leaders were opposed.

Opinion: Representative David Cicilline, one of the authors of the article of impeachment, makes his case.

Repercussions: A number of businesses and other prominent institutions have cut ties with Mr. Trump since the Capitol attack.

The surge in new coronavirus cases and hospitalizations across the United States is reflected in dire new statistics: The seven-day average of virus-related deaths has exceeded 3,000 a day, reaching 3,249 on Sunday. On average, more than 250,000 cases a day have been reported over the past week. And the cumulative total of virus deaths surpassed 375,000 on Monday, according to a New York Times database.

Overburdened health care facilities are also struggling to vaccinate people. With states and counties left largely to sort out the logistics themselves, the vaccination program has gone anything but smoothly: As of Monday, fewer than nine million people had gotten at least one shot, far short of the federal goal of 20 million people or more by Dec. 31.

Joe Biden: The president-elect received his second injection of a vaccine on Monday. His team said he would invoke the Defense Production Act if necessary to ensure that second doses can be given on schedule.

The Palestinian Authority has given emergency authorization to Russia’s Sputnik V Covid-19 vaccine, with a first batch expected to arrive in February.

Russian scientists have begun a study to determine whether they can speed up the country’s vaccination drive by providing only a single dose of its vaccine, which is meant to be given in two doses.

Britain’s health care system is facing “the worst weeks of this pandemic,” the government’s chief medical officer said on Monday, adding that hospitalizations in England had far surpassed the spring’s peak.

Indonesia authorized emergency use of the vaccine made by Sinovac, a private Chinese company, after trials showed it had an efficacy rate of 65.3 percent. Mass vaccinations will begin there in the coming weeks.

Priesthood is still out of reach for Catholic women

Pope Francis has amended the Catholic Church’s laws to formally allow women to be Bible readers at Mass, serve at the altar and distribute communion, though he stopped short of letting them become deacons or priests.

In many countries, Catholic women have already been carrying out those duties. But by amending the Code of Canon Law, which lays down the rules of Catholic practices, Francis removed the possibility that conservative bishops might bar women from those roles.

In a note, the Vatican said the pope wanted to make clear that “what is under discussion are lay ministries, ‘fundamentally distinct from the ordained ministry that is received through the sacrament of holy orders.’” The church hierarchy, including Francis, has made it clear in recent decades that ordaining women as priests is not on the table.

Analysis: The decree in itself “is not a radical shift,” said Kate McElwee of the Women’s Ordination Conference. “But the church recognizing widely accepted practices by Catholics around the world and taking the steps to be more inclusive is a radical thing,” she added.

If you have 7 minutes, this is worth it

Once a popular destination for both Western and Indian visitors, Kashmir, above, has been reeling for more than a year. First, India brought in security forces to clamp down on the region as its autonomy was wiped out. Then the coronavirus struck. Now, the tourism-dependent region has been brought to a near halt, with soldiers filling the streets.

Indonesian crash: The sleepy island of Lancang has become a base for search and recovery operations since Sriwijaya Air Flight 182 crashed on Saturday with 62 people onboard.

Reproductive rights: A human rights group in Northern Ireland is taking legal action against the British government over its failure to provide abortion access, highlighting the continuing struggle for safe abortions more than a year after the procedure was legalized in the region.

Yemen: The U.S. plans to designate the Houthi rebels as a foreign terrorist organization, a move that could complicate the delivery of humanitarian aid in a country already on the brink of famine.

Snapshot: Over the weekend, Madrid experienced its heaviest snowfall in 50 years, above. At least three people died after Storm Filomena blanketed the Spanish capital in more than a foot and a half of snow, paralyzing it for days.

Lives lived: Pat Loud, the irrepressible matriarch of the first reality television series, “An American Family,” who unapologetically laid bare the drama of her family life, has died at 94.

‘Sex and the City’ revival: HBO Max announced the return of the hit show about friends navigating love and careers in New York City, this time as a 10-episode series called “And Just Like That …” One downside? No Samantha.

What we’re reading: This Associated Press article about a Missouri woman believed to be the last Civil War widow, who died recently. “This blew my mind,” says Amelia Nierenberg, who writes the Coronavirus Schools Briefing.

Cook: With a velvety dressing and crisp chickpeas, this vegan Caesar salad has the tangy-salty-punchy balance of the real deal.

Watch: One of the greatest films of all time, “The Rules of the Game,” first shown in 1939, is a movie about discretion — and, in every way, a model of it.

Buddy up: To create a healthy habit, find someone (or something) to keep you accountable.

Keep yourself busy at home with our At Home collection of ideas on what to read, cook, watch, and do while staying safe indoors.

And now for the Back Story …

On running and taking notes at the same time

During a 24-hour race, the reporter Jen A. Miller tried to interview as many of her fellow runners as she could. Here’s how she did it, excerpted from the Times Insider original.

But running and reporting would be a logistical challenge.

The race was held on a paved loop just short of a mile; whoever clocked the most mileage inside the time window would be the winner. We ran laps, which meant I saw the same people over and over. I interviewed as many runners as possible early on, when we were fresh, excited and coherent.

Even though the reported version of the race clips along at a reliable speed (so I hope), the race itself was very long and — to be blunt — boring.

Since it was such a long race, runners moved more slowly than they typically would in something like a marathon. When I saw other runners walking, I’d catch up and walk at their pace and do the interview along the way.

Near dawn, I ended up walking two full laps with Michael Gagliardi, the eventual winner, who did 125 laps for 123.87 miles. I was foggy then, so I called him after the race to make sure my memory was accurate. That led him to tell me things that he had been too frozen to tell me on the course, including how he had gotten through the night by reminding himself that, with every passing hour, another part of the world was celebrating the New Year.

Ten days later, I’m still a little creaky. I haven’t even started thinking about my next race, but I find my mind drifting to what I might do next.

Hopefully I won’t need the pencil next time.

That’s it for this briefing. Have a great day.

Thank you
Theodore Kim and Jahaan Singh provided the break from the news. You can reach Natasha and the team at [email protected]

P.S.
• We’re listening to “The Daily.” Our latest episode looks at the coronavirus variant and the vaccine rollout in the U.S.
• Here’s our Mini Crossword, and a clue: “Why not!” (four letters). You can find all our puzzles here.
• Our politics reporter Astead Herndon spoke to The New Yorker about covering the Georgia elections and the Republican Party’s “wake-up call.”

Opinion | What Happened to Your American Dream?