We’re covering growing concerns about the new variants of the coronavirus, China’s show of force in the Taiwan Strait and the anniversary of the Wuhan lockdown. 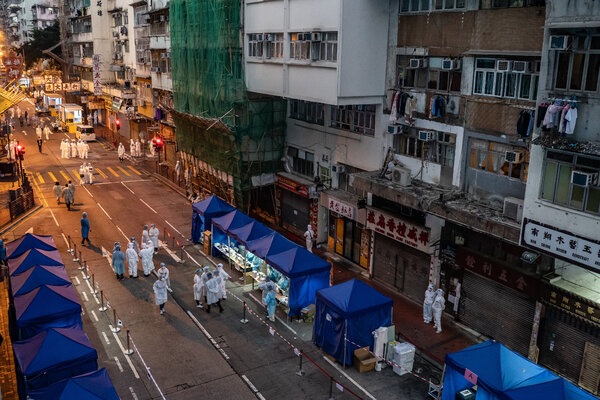 The variants that could undo pandemic progress

As the world approaches 100 million coronavirus cases — including 25 million in the U.S. as of Saturday — questions are surfacing about new variants of the virus that could slow or even reverse the progress that has been made toward ending the pandemic.

One of those questions is how effective the current vaccines will be against these altered versions of the virus, which initially appeared in Britain, South Africa, Brazil and the U.S. Some appear to be more contagious than the original version, and all are little understood.

Prime Minister Boris Johnson has said that the variant first found in Britain might also be associated with a slightly higher chance of death, even as he acknowledges it is too soon to be sure.

Taiwan ordered 5,000 people to quarantine on Sunday as it sought to contain a rare domestic cluster of Covid-19 connected to a hospital, Reuters reported.

In Hong Kong, the authorities said on Saturday that they had locked down part of the Jordan district and started to test everyone there, one of the most drastic measures that the Chinese territory has taken since the coronavirus surfaced there last winter.

New Zealand has reported its first coronavirus case in more than two months. The infected woman was a 56-year-old who recently returned from Europe and had quarantined at a hotel in Auckland.

Larry King, who interviewed presidents, movie stars and people from all walks of life, died on Saturday in Los Angeles at the age of 87. A statement from his media company did not specify a cause of death, but he had recently been treated for Covid-19.

The cost of vaccine inequality

Failing to distribute the Covid-19 vaccine to poor countries will cause global economic devastation, and affluent countries will be hit nearly as hard as those in the developing world, according to a new study to be released today.

In the most extreme scenario — with wealthy nations fully vaccinated by the middle of this year, and poor countries largely shut out — the study concludes that the global economy would suffer losses exceeding $9 trillion, a sum greater than the annual output of Japan and Germany combined.

In a more likely scenario, in which developing countries vaccinate half their populations by the end of the year, the world economy would still absorb a blow of between $1.8 trillion and $3.8 trillion.

The study, commissioned by the International Chamber of Commerce, found that the continued pandemic in poor countries is likely to be worst for industries that are especially dependent on suppliers around the world, among them automotive, textiles, construction and retail, where sales could decline by more than 5 percent.

Details: Economists affiliated with Koc University in Turkey, Harvard University and the University of Maryland examined trade data across 35 industries in 65 countries to assess the economic impacts of unequal vaccine distribution.

China’s show of force over Taiwan

China sent warplanes into the Taiwan Strait over the weekend, just days after a new U.S. administration took office.

Taiwan’s military said that 13 Chinese warplanes on Saturday and 15 on Sunday entered its southwestern air defense identification zone and crossed the midline that divides the Taiwan Strait. The drill was the biggest so far this year and the first under President Joe Biden.

In response, a spokesman for the U.S. State Department urged Beijing “to cease its military, diplomatic, and economic pressure against Taiwan and instead engage in meaningful dialogue with Taiwan’s democratically elected representatives.”

Context: Officials from the Biden administration have said that the U.S. will maintain a tough stance toward China while showing support for Taiwan. Taiwan’s de facto ambassador to the U.S., Bi-khim Hsiao, was invited to attend Mr. Biden’s inauguration, the first such time a representative from Taiwan was asked to attend since 1979.

Last January, when the coronavirus brought the city of Wuhan to a halt, the Chinese Communist Party was on the verge of its biggest crisis in decades. A year later, the party’s control of the narrative has become absolute, our columnist writes.

The tragedy showed Beijing has the ability to control what people in China see, hear and think to a degree that surpasses even what pessimists believed. China became a more opaque place in 2020.

Trump impeachment trial: The House of Representatives on Monday will deliver its impeachment charge against former President Donald Trump to the Senate, but the trial will not begin before Feb. 8.

Asia’s “El Chapo”: Tse Chi Lop, said to be the leader of a multibillion-dollar drug syndicate, was arrested in Amsterdam on Friday and faces extradition to Australia. The syndicate he runs is believed to be responsible for 70 percent of the illegal drugs that reach Australia, where meth in particular has ravaged rural areas.

Chinese miners: Two weeks after an explosion left a group of miners trapped below ground in Shandong Province, at least 11 were found alive and lifted to the surface on Sunday. Some were carried out, but others appeared to be in better health and able to walk with assistance.

Snapshot: Above, supporters of the jailed opposition leader Aleksei Navalny in Moscow on Saturday, holding banners that read, “Don’t be afraid. Don’t be silent,” and “One for all and all for one.” There were demonstrations in more than 100 cities on Saturday, the biggest protests in Russia since at least 2017.

What we’re reading: This GQ piece in which Douglas Emhoff writes about his role as the first Second Gentleman. It’s an interesting read about reinventing yourself.

Cook: This hearty lasagna with spinach and herby ricotta uses layers of Parmesan-topped baked polenta in place of pasta.

Listen: Billie Eilish and Rosalía join forces on a song that will baffle perhaps all expectations. It and 12 other picks are in our pop critics’ latest playlist.

Do: The standing 7-minute workout is a gentler version of a popular workout. It keeps you moving while keeping your body off the floor.

We have many more ideas on what to read, cook, watch and do, while staying safe at home in our At Home collection.

Last January, when Wuhan shut down, it offered the world an early warning about the dangers of the virus. Now the city points to a post-pandemic world where the relief at unmasked faces and joyous get-togethers conceals the emotional aftershocks. Our correspondents Chris Buckley and Vivian Wang shared some thoughts about their reporting on the first anniversary of the Wuhan lockdown with Melina Delkic from the Briefings team.

Did you learn anything that surprised you?

Chris: I’ve been struck by how quickly so much of Wuhan has revived. I was there last year in the depths of the pandemic, and it was difficult to imagine where the city would be one year later. It was heartening to hear Wuhan people saying that they now felt proud about coming from the city; last year there was a kind of stigma.

Vivian: I spoke to a Wuhan delivery driver who said he felt the epidemic had totally reconfigured his priorities, so he’s less worried about money now and he’s trying to spend more time with family. But he also talked about how quickly people around him have snapped back to normal, and how many of the lessons learned in the heat of lockdown — like treating delivery workers more kindly — can be forgotten.

What’s the mood in Wuhan now?

Chris: On the one hand, many people are relieved to move past last year and get back to making a living and enjoying life. Gilles Sabrié’s pictures from Wuhan that feature in our story capture that mood wonderfully. On the other hand, moving ahead is much harder for families that suffered deaths or severe illness. The Chinese government wants to sweep a lot of questions about missteps last year under the rug, and so that has made it harder for these grieving families to speak out.

Thank you
To Theodore Kim and Jahaan Singh for the break from the news. You can reach the team at [email protected]

P.S.
• We’re listening to “The Daily.” Our latest episode is on President Biden’s executive orders and how governing by decree can be fraught.
• Here’s our Mini Crossword, and a clue: Exhales with exasperation (five letters). You can find all our puzzles here.
• Marcela Valdes, who has covered politics, culture, immigration and more for The New York Times Magazine for many years, is joining the Magazine as a staff writer.

Opinion | Why Tucker Carlson Is Obsessed With Kristen Clarke