Vaccines roll out across Europe.

We’re covering the start of mass vaccinations in Europe, the trial of a citizen journalist who chronicled China’s coronavirus crisis and the treasured hangouts in the U.S. that are now closed for good. 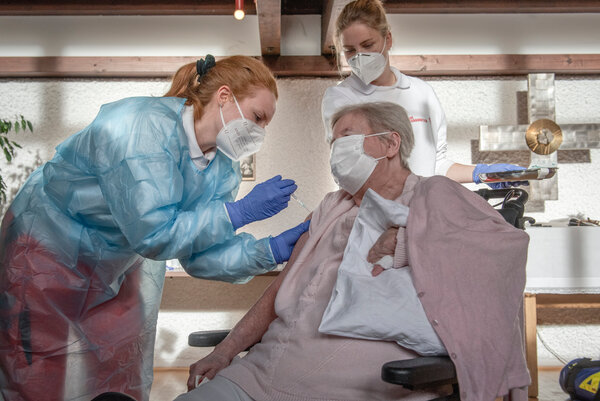 From nursing homes in France to hospitals in Poland, older Europeans and the workers who care for them rolled up their sleeves on Sunday to receive coronavirus vaccine shots.

The campaign to inoculate more than 450 million people comes as many European countries are struggling with their worst outbreaks since the start of the pandemic. The spread in Britain of a more contagious variant of the virus has raised alarm.

The numbers: More than 350,000 people in the 27 nations of the European Union have died from Covid-19 since the first fatality was recorded in France on Feb. 15. In Poland, November was the deadliest month since the end of World War II. The global total of infections has passed 80 million, and more than 1.7 million people have died.

Canada, France, Japan, Spain, Sweden and Norway have found small numbers of infections involving a new, potentially more transmissible variant of the coronavirus, most linked to travelers from Britain, where it was first detected.

A tide of new coronavirus cases in Africa is raising alarm in countries that, over all, appear to have fared far better than those in Europe or the Americas.

U.S. case numbers are about as high as they have ever been. Total infections have surpassed 19 million and deaths are over 330,000, meaning that at least 1 in 17 people in the country have contracted the virus and 1 in 1,000 have died from it.

During the lockdown in Wuhan, China, Zhang Zhan posted videos, like one of hospital hallways lined with patients hooked up to oxygen tanks or of a community health center for testing.

She abruptly stopped posting in May, and the police later revealed that she had been arrested, accused of spreading lies. Today, she will go to court, in the first known trial of a chronicler of China’s coronavirus crisis.

Ms. Zhang, a 37-year-old former lawyer, embodied the Chinese people’s hunger for unfiltered information about the epidemic. Three other citizen journalists have disappeared from Wuhan.

Bigger picture: Ms. Zhang’s prosecution is part of the Chinese Communist Party’s campaign to recast China’s handling of the outbreak as a succession of wise, triumphant moves by the government.

Watch: In one of her final videos before her arrest, she filmed the shuttered shops in Wuhan, before being confronted by a man who asked her where she lived and whether she was a journalist.

How Biden will deal with India

The Trump administration invested in its relationship with India as a way to counterbalance the rise of China. Some experts believe that the U.S. under Joe Biden’s presidency cannot afford to drastically alter that policy.

Quotable: “We need India for various reasons,” said Ashley J. Tellis, a senior fellow at the Carnegie Endowment for International Peace in Washington. “Most important of which is balancing Chinese power in Asia.”

A village of widows

Most of the men from Qala-e-Biwaha, a village in western Afghanistan, have disappeared — killed while trying to smuggle opium into neighboring Iran. Their widows have been left to fend for themselves and their children, some of whom have also died while transporting drugs over the border.

Our correspondents report on a place so destitute that the district governor says men seeking work have only two choices: “They can smuggle drugs or join the Taliban.”

Brexit deal: British lawmakers are set to vote this week on the trade deal on Britain’s departure from the European Union and begin an unpredictable experiment to unstitch commercial relations across Europe.

Nashville explosion: Hundreds of U.S. investigators are working to determine who was involved — and why — in a Christmas Day explosion of a vehicle in the city’s downtown that injured three people and damaged scores of businesses.

Minoru Makihara: The former president of Mitsubishi, who led the company through the doldrums of Japan’s post-bubble era in the 1990s and helped it meet the demands of a globalizing economy, died on Dec. 13 in Tokyo. He was 90.

Snapshot: Above, Ma’am Sir, a popular Filipino restaurant in Los Angeles, before its closure this year. It’s one of many beloved hangouts across the U.S. lost in the economic ravages of the pandemic.

What we’re reading: This Bloomberg article on how the Brexit deal was done. It’s a behind-the-scenes look at “Brexit noir,” a deal that finally came together during a very unusual time.

Cook: These cinnamon crumb cake muffins have a layer of crumbs on the bottom and the top, and are about as tender and moist as cake gets.

Do: With all of its stress and uncertainty, this year hasn’t exactly been a banner year for intimacy. But that can change.

As you head into the final week of 2020, At Home has ideas on what to read, cook, watch and do while staying safe at home.

How we reported on kids and pollution in Delhi

Our recent story about bad air in New Delhi sought to measure the pollution two children — Monu and Aamya — breathed on one normal day. Derek Watkins, an editor on the Graphics desk, was part of a large team that worked on this story. He wrote about how it all came together.

It’s unusual for The Times to collect data for a project like this. We usually build charts and other graphics with the data given to us by outside experts. But the data we wanted didn’t exist. We started talking to researchers, who patiently helped us to think about the best way to gather the information and understand how we might go wrong.

We partnered with Adithi Upadhya and Meenakshi Kushwaha, pollution researchers with ILK Labs in Bangalore, who have experience measuring pollution in India using lower-cost sensors like the ones we wanted to use.

We settled on using a portable pollution monitor, the Airbeam 2 by HabitatMap, along with custom software running on a tiny Raspberry Pi computer, to take exposure measurements of Monu and Aamya every five seconds. Meenakshi and Adithi also volunteered more specialized equipment from their lab.

After our reporting, Adithi and Meenakshi helped us analyze the data. The results were striking: Over the course of the day, Monu was exposed to about four times as much pollution as Aamya. Although precise estimates are impossible to make, a long-term, consistent disparity like that could steal around five years more life from someone in Monu’s position, compared with an upper-middle-class child like Aamya.

Thank you
To Theodore Kim and Jahaan Singh for the break from the news. You can reach the team at [email protected]

P.S.
• We’re listening to “The Daily.” Our latest episode is on a Brooklyn hospital that we revisited to see how the staff is coping with the pandemic.
• Here’s our Mini Crossword, and a clue: Tofu base (three letters). You can find all our puzzles here.
• Photos from two Times photographers were featured in Time Magazine’s top 10 photos of 2020.

Opinion | Pope Francis: A Crisis Reveals What Is in Our Hearts